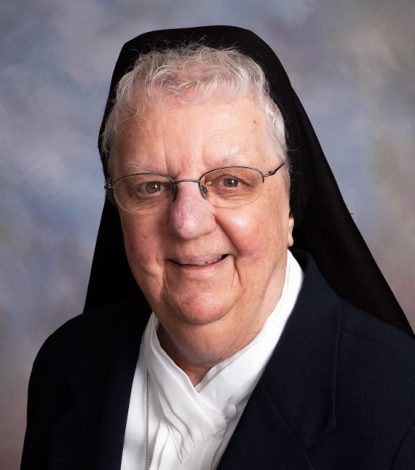 Sister Maureen Catherine Cassel, I.H.M., died Feb. 1 in Camilla Hall. She was 90 and in the 71st year of her religious life.

She was one of five children of Harry and Catherine (Quigley) of St. Francis of Assisi Parish in Norristown. After attended St. Francis of Assisi School and graduating from St. Matthew High School in Conshohocken in 1948, she entered the Sisters Servants of the Immaculate Heart of Mary and 1949.

She received her habit and her religious name Sister Maureen Catherine in 1950, and professed first vows in 1952.

While in the community she earned her A.B. degree from Immaculata College and M.Ed. degree from West Chester State University.

She served as convent superior and teacher of principal at St. Ann in Lansford; Gesu School, Philadelphia; at St. Ann in Phoenixville; at Immaculate Conception; and Holy Saviour, Norristown.

At the end of the 1988 school year, our administration appointed

Sister Maureen Catherine was regional superior residing at St. Francis de Sales Convent, Philadelphia from 1988 to 1994, after which she was superior and principal at St. Dorothy in Drexel Hill until 1997.

From August 1997 through August 2000 Sister was She then was superior at Mary Immaculate Convent, where she assisted in the Student Affairs Office at “Goretti” for two years and secretary to the president at Hallahan High School for one year. In August 2000, she was appointed superior of the local community at Villa Maria House of Studies.

In August 2006, Sister Maureen Catherine went to St. Aloysius Academy and served as a receptionist at IHM Educational Center then staff at IHM Conference Center for the next five years.

She joined the Apostolate of Prayer Community at Camilla Hall in 2018.

Sister Maureen Catherine is survived by her brother Lawrence Cassel, many loving nieces, nephews, grandnieces, and grandnephews, and her congregation of I.H.M. sisters. She is predeceased by her parents and brothers Father Harry A. Cassel, O.S.A., Joseph D. Cassel and Wilfred J. Cassel.

The funeral Mass was celebrated privately Feb. 5 in Camilla Hall. Father Anthony Janton was the celebrant and Augustinian Michael DiGregorio was present.