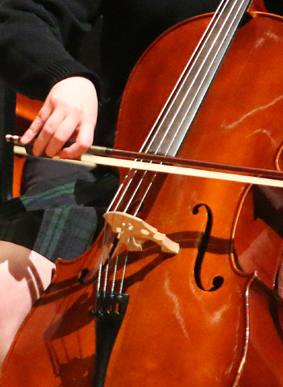 The 2021 All Catholic String Orchestra composed of 36 students representing archdiocesan and private Catholic high schools in the five-county region will perform Saturday, March 6 at 6:30 p.m. in a virtual concert from the Archbishop Wood High School Auditorium.

Joseph Lovecchio will be the guest conductor of the concert, hosted by Archbishop Wood President Gary Zimmaro.

View the livestream of the concert here.

Guest conductor Lovecchio has been the music director and conductor of the Warminster Symphony Orchestra since 1995. Prior to that he played principal trumpet and served as the associate conductor. Under his baton the orchestra performs the finest orchestral literature and annually features guest soloists of national and international renown.

Lovecchio has earned recognition for his work as a music educator including being named one of America’s top music educators by the education division of Conn Selmer Corporation. He has been nominated and chosen for Who’s Who of America’s Teachers and included in 20 editions of Marquis’ Who’s Who in America for contributions in the arts and education.

Currently he is a resident of Warminster and was recently honored by the Warminster Township Board of Supervisors for his many contributions to the cultural and educational life of the community.

NEXT: Get vaccine in good conscience, Pa. Catholic Conference says