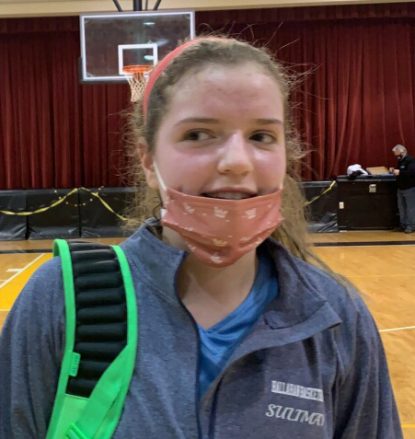 John W. Hallahan High’s last basketball shot — ever — was a game-winning three-pointer at the buzzer by Mya Sulimay. (Photo by John Knebels)

Any time a successful institution faces its ultimate demise, the final days are arguably those it remembers most.

For John W. Hallahan and Bishop McDevitt High School’s girls’ basketball teams, happy thoughts will permeate their memory banks. In November, when the Archdiocese of Philadelphia announced that both schools would be permanently closing in June, the mood was completely different.

“We didn’t even know if we would have a season,” said McDevitt coach Dan Greenberg, referring to the coronavirus that threatened the mere existence of any winter sports. “There were so many emotions. No one knew what to think.”

Fast forward to March 6 and March 19, respectively. Both dates will forever be associated with a bittersweet fact; no longer will anyone wear a Hallahan or McDevitt basketball uniform.

On March 6, the Mighty Mice of Hallahan played their last game ever – ironically against McDevitt – and captured a scintillating victory in the closing seconds, thus closing the season with three wins in their final four games.

With emotions running high among the family representatives present from both institutions, visiting Hallahan captured a dramatic 52-49 victory when junior Mya Sulimay took an under-the-basket inbounds pass from sophomore Brynne Tomaszewski and swished a three-pointer at the buzzer.

(Watch the video below)

Having just completed a final stat line of 11 points, 12 rebounds, six steals, and three three-pointers, Sulimay described the most special moment of her young career.

“That was crazy,” said Sulimay, who joined junior teammate Ashiah Milburn on the All-Catholic team. “I just saw her throw it and I was like, ‘I gotta make it.’ I didn’t think it was going in, but it went in. Thank God.

“I couldn’t believe it. Then everyone started running over. It’s just … especially since it’s our last game and it’ll be my last game ever playing for Hallahan … it was just a great way to end it.”

As Hallahan players finished a celebratory embrace, the first person to congratulate Sulimay was Bishop McDevitt coach Dan Greenberg, who also supplied Sulimay with the game ball – a keepsake that will always maintain major historic relevance.

When a photo of Greenberg congratulating Sulimay near center court was posted on Twitter, the classy gesture went viral.

“I was shocked,” said Sulimay, who next year plans to attend Neumann-Goretti. “It showed such great sportsmanship. It just felt unreal. Even the girls on McDevitt came up and congratulated me.

“Everyone had the sportsmanship tonight that we all needed.”

At that point, it appeared as though both teams had played their final game. Then the Lady Lancers found out that they would be the only representatives available to compete in the District 12 playoffs. 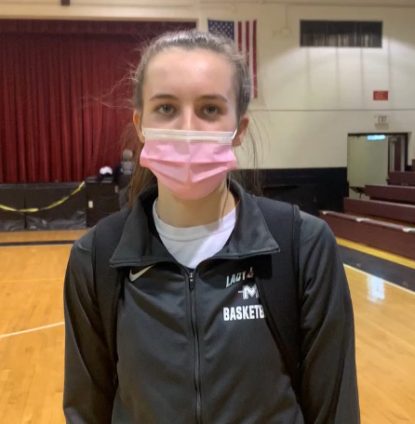 Bishop McDevitt senior Kate McNally saved some of her best basketball down the home stretch. (Photo by John Knebels)

“Winning districts was so great,” said McDevitt senior Kate McNally, who had starred in the aforementioned loss to Hallahan with 11 points and nine rebounds. “Being the last team in McDevitt history, I am so proud that we can call ourselves district champs.”

Unfortunately for the Lady Lancers, their first opponent was Mahanoy Area High School, the rugged District 11 champ that carried an 18-4 record into the tourney. The challenge was too steep, and McDevitt’s official last game ever was a 56-26 loss.

From the Lady Lancers’ proactive reaction, however, no one would have known they were dealing with defeat.

“We went into the season with the mindset that we would enjoy every practice and game together,” said Greenberg. “We knew we would struggle, but we struggled as the Lady Lancers basketball team.

“The win against Penn Treaty in the district championship game was a great team win and the perfect time to get our first win of the season. The loss in the state playoff game did not impact this great group of girls one bit. On the bus ride home, they celebrated with each other like they just won the PCL championship.”

In the final moments of their existence, despite months of heartache, frustration and confusion, the basketball teams at John W. Hallahan and Bishop McDevitt proudly represented the Catholic League … at its finest.