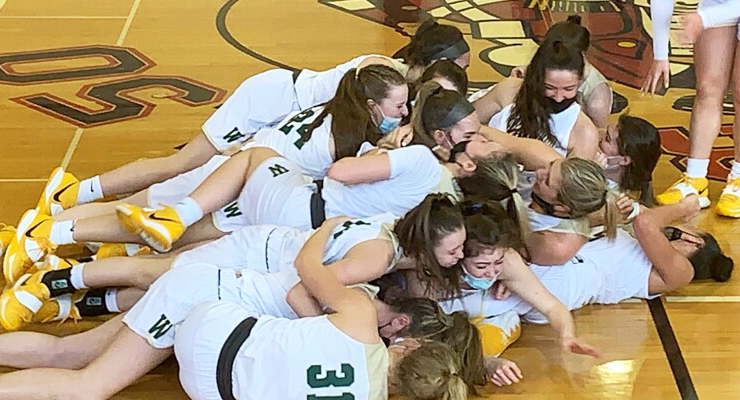 As they walked off the Palestra court following a numbing overtime loss to West Catholic in the Philadelphia Catholic League girls’ basketball championship last year, the pressure commenced immediately.

From that point through the current postseason, the Archbishop Wood returning players fully comprehended that anything short of earning a PCL plaque would fall far short of their objectives.

“It just simply wasn’t an option in our mind,” said senior Kaitlyn Orihel. “We didn’t even let that thought exist anywhere. Knowing that this was our last shot, not leaving with the plaque wasn’t even a thought in our mind.”

Orihel, who this year seized the ultra-rare, if not unprecedented, feat of being named a first-team All-Catholic for a fourth consecutive season (Cardinal O’Hara phenom Kristen Clement did the same from 1994 through 1997), vividly recalls her mindset as she exited the hallow halls of the Palestra amidst West Catholic jubilantly celebrating its title. 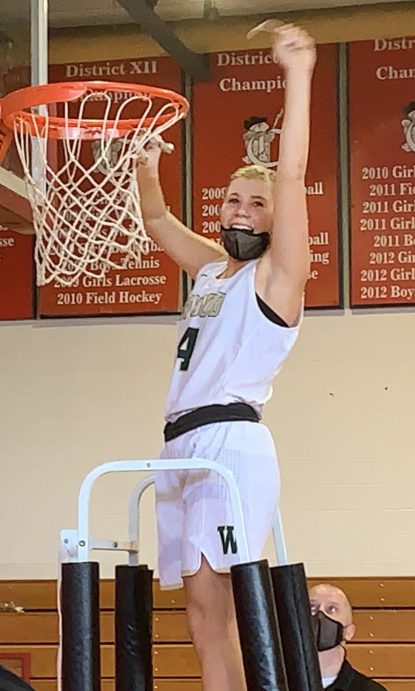 “I was honestly in disbelief,” said Orihel. “I had so many emotions after the game. It was so upsetting. After the first year losing in overtime (2019 against Archbishop Carroll), I couldn’t believe that it happened again.

“I thought during the game that once we went in overtime, it was gonna be ours. It was really disappointing to end in the same spot we did the year before.”

After an uncharacteristic scoreless first half, Orihel finished with 12 points. In the interim, juniors Ryanne Allen and Bri Bowen scored in every quarter.

Allen, a first-team All-Catholic who has emerged as one of the league’s best-ever three-point snipers, slashed three, eight, seven, and four points to finish with a game-high 22 points while adding 10 rebounds. One of her four treys, a step-back bullet at the third-quarter buzzer, brought Wood’s boisterous zealots to their feet.

“It definitely got my momentum going,” said Allen, referring to her early shooting success. “It made me confident, but it also made me find other people for their open shots, too.”

Among those who benefited from Allen’s game-high four assists was Bowen. Known more for her ability to stifle opponents’ top scorers regardless of their position, Bowen drilled three treys and contributed 15 points, four rebounds, three steals, and a block.

“I made sure I always had a hand up,” said Bowen. “We went over guarding each individual player closely at practice. This prepared us really well for the game because we were so focused on the defensive end and were all on the same page.

“I can guard one-five on the court, and staying focused on defense allows me to flow into my offense.”

The socially distanced and masked attendees – mostly family members of both squads – were treated to four ties and eight lead changes. Until the final four minutes of the fourth quarter, the ultimate victor remained a flip of the coin.

A 24-24 halftime tie became 32-32 halfway through the third, but a 10-4 run supplied the Lady Vikings with a 42-36 edge heading into the fourth stanza. Eight minutes separated Archbishop Wood from shelving the disappointment of the recent past.

After an early basket by O’Hara senior Siobhan Boylan (eight points, three rebounds), the Lady Vikings’ defense tightened its grip up and down the floor. Meanwhile, Orihel scored six points in the fourth and Allen added four more, and inside the final minute, Wood coach Mike McDonald relied on his bench to finish the championship deed.

As she celebrated with her teammates, Allen recalled a conversation she had with Orihel three years earlier.

“I remember telling Kaitlyn as a freshman that we were going to win a PCL championship, and we did that,” said Allen. “To do that for (the seniors) going out is pretty amazing.”

The last person to complete the traditional net-cutting ceremony, McDonald stood proudly on the top step of a ladder and from above his head enthusiastically waved the mesh in circles while his players roared their approval.

“I couldn’t be prouder,” said McDonald. “I’m grateful that my seniors get to finish with a Catholic League championship.”

One of those seniors, Noelle “Do the Little Things Well” Baxter, was asked to describe her emotions as the final seconds ticked away.

“Bliss,” said Baxter with a wide smile. “I was just so happy. I was already crying on the side. I was just … so happy.”

A year earlier, Baxter cried for a much different reason – a now-distant memory replaced by tears of joy.

Winning a Catholic League championship tends to do that to an athlete. 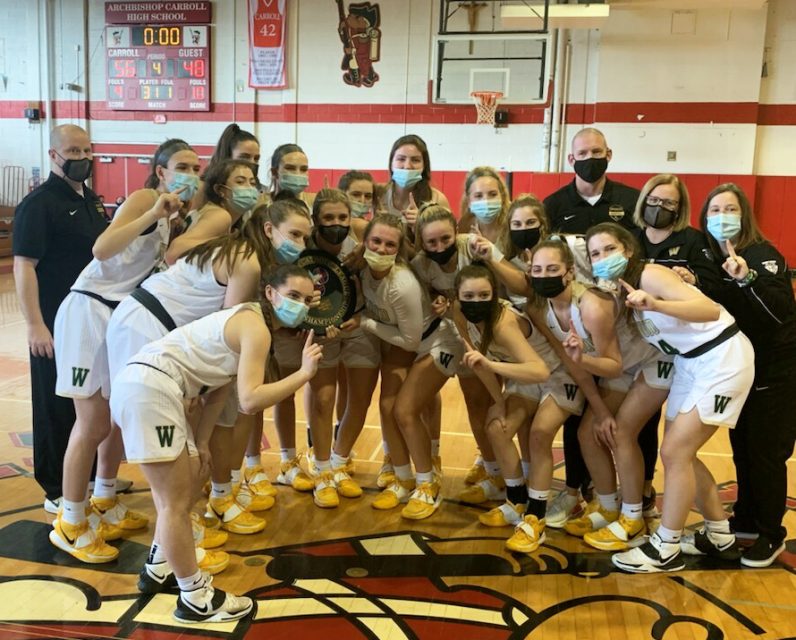