Bambies rediscover God, and one another, during spring retreat 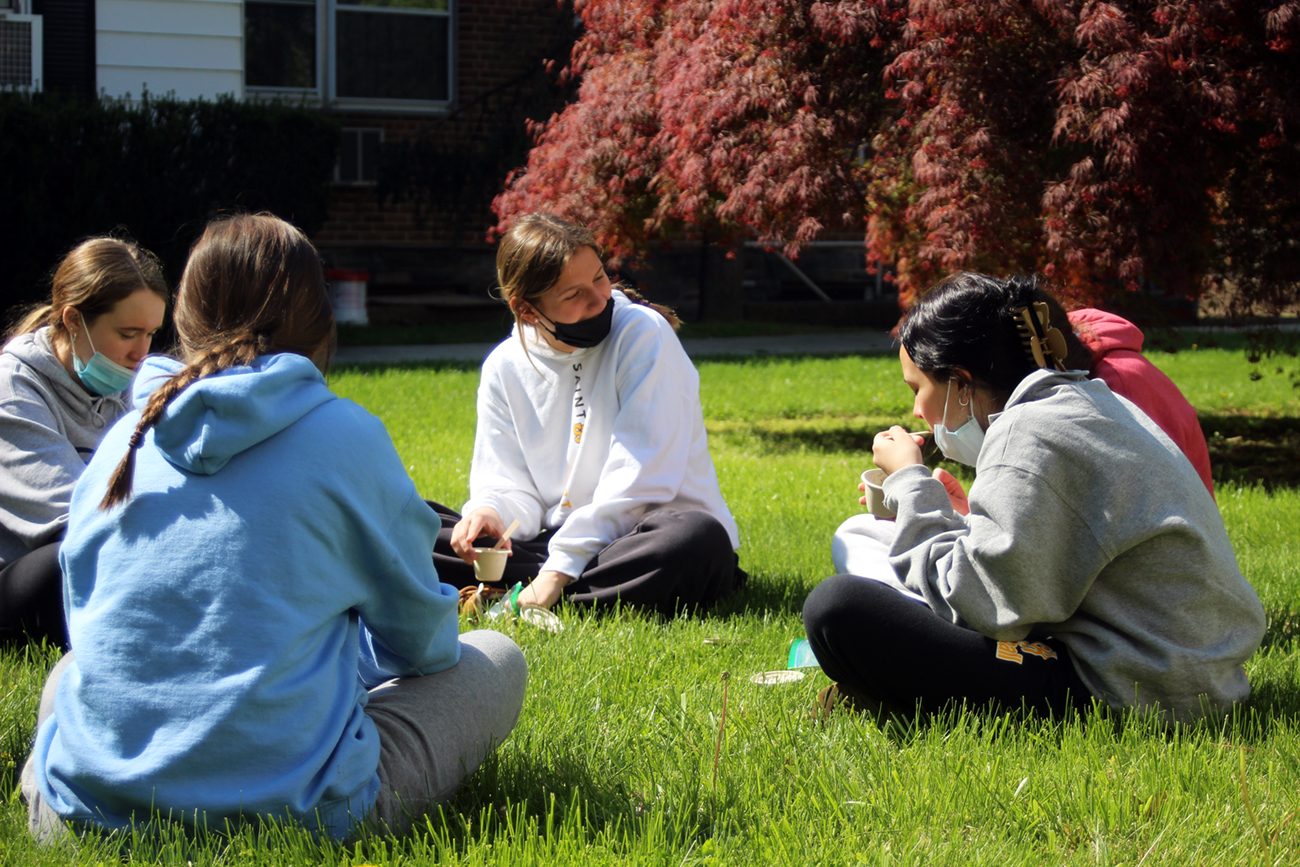 Sophomores from St. Hubert Catholic High School for Girls in Philadelphia reconnected with God, nature and each other during an April 23 retreat, the first time the entire class was assembled in person since March 2020. (Gina Christian)

Students at one archdiocesan high school marked Earth Day by “rooting themselves in their faith,” while reconnecting with both nature and each other after months of COVID-related separation.

Last Friday, the sophomore class at St. Hubert Catholic High School for Girls assembled for a day-long spring retreat that combined prayer, reflection and gardening – a program designed to ensure participants “really lean” into their belief in God amid the turbulence of the pandemic, said president Lizanne Pando.

“The world has put a lot on the girls at this time,” she said. “They’ve learned how to overcome adversity, but we want to make sure they’re really using their faith to bring peace and push out the storms going on around us.”

The gathering, coming a day after the April 22 global observance of environmental awareness, drew the entire class together for the first time since March of last year, said Pando, noting she and school administrators carefully planned the retreat to ensure adequate social distancing throughout.

An opening Mass — celebrated by Father David Buffum, parochical vicar at St. Katherine of Siena Parish in Philadelphia – was moved into the gym, and many of the day’s sessions were held outside, said Pando.

Time in the fresh air on a sunny spring day was a boost to the students’ mental health, she said.

Sophomore Diana Kahn admitted starting high school during a pandemic had been “nerve-wracking.”

In-person instruction was suspended in March 2020, when “we were all still kind of getting out foot in there,” said Kahn. “We took our first final exams for high school online, which was different.” 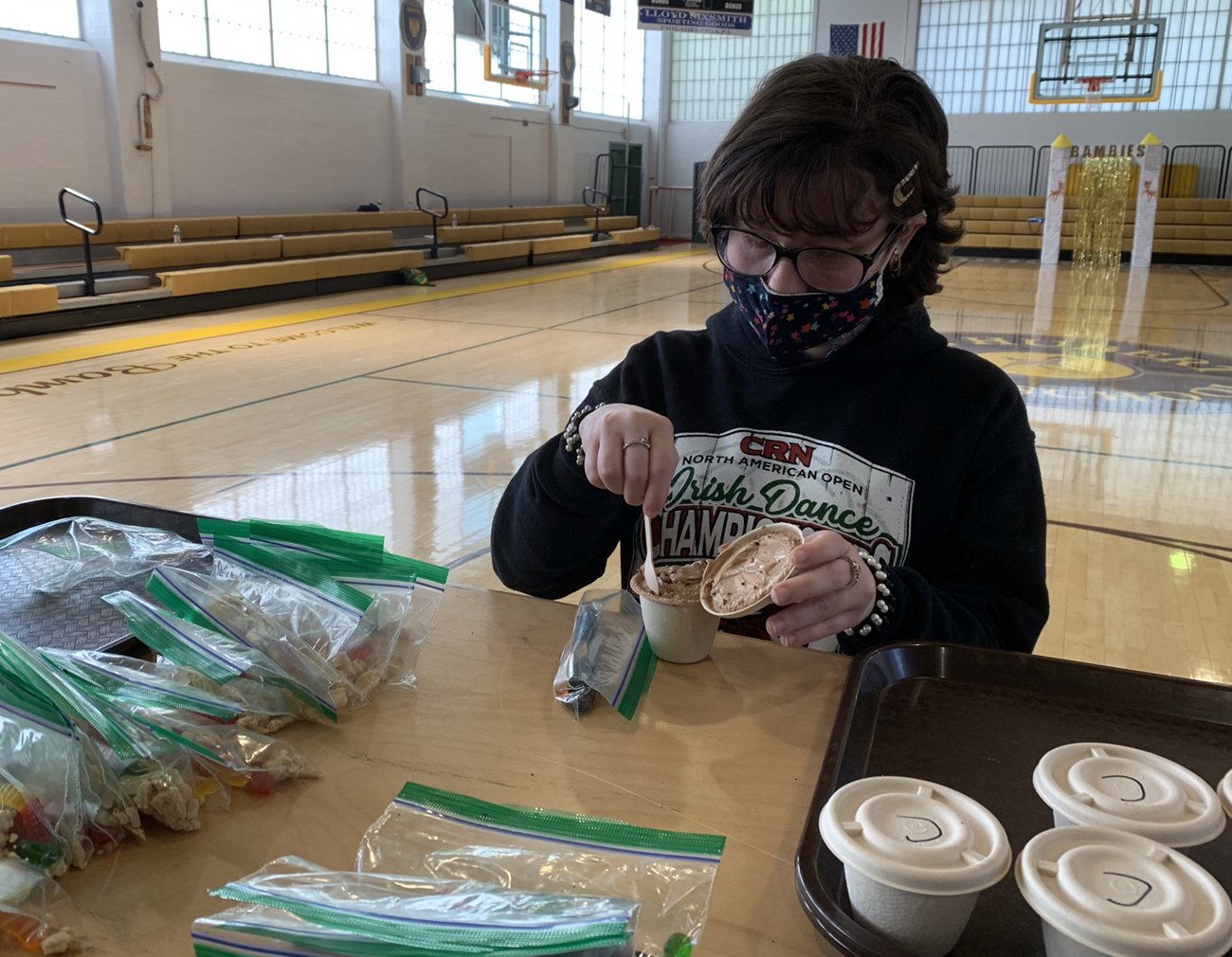 Diana Kahn, a sophomore at St. Hubert Catholic High School for Girls, prepares a “dirt cup” dessert that matched the spring theme of an April 23 retreat at the school. (Gina Christian)

Even after a hybrid learning model was introduced, “it felt like being a freshman again,” she said.

With half of the class participating remotely on a given day, “we don’t really interact with (each other),” said Kahn. “I almost forgot the people I knew were still with me in school.”

Countering that sense of fragmentation was central to the retreat day, said director of ministry Mary McGinley.

“A lot of our sophomore class hasn’t even been in the building this year, and they have the largest percentage of virtual classes of our students,” she said. “I think it’s really affected them, so my hope for today was that they get an opportunity for fellowship.”

At the same time, McGinley said she and her colleagues designed the sessions to help students “meet God in prayer.”

The Bambies began the morning with a “prayer station scavenger hunt,” identifying sacred art and objects through the school building, she said.

Passages from “Laudato Si’,” Pope Francis’ 2015 encyclical on care for the environment, served “as a guideline for the retreat” and “framed what we’re discussing or doing,” McGinley added.

Even the featured snack underscored the retreat theme: “dirt cups” of pudding and cookie crumbs, topped by candy worms, to highlight the good soil of the Parable of the Sower (Mt 13:1-9, Mk 4:1-9, Lk 8:4-8).

At the end of the retreat, students rolled up their sleeves and dug into a section of earth, planting a native pollinator garden before the school’s statue of Mary, Our Lady of the Highways, which faces Torresdale Avenue – another teaching moment, said McGinley.

“We’ve all found a real balm in nature over the last year,” she said. “It’s because man has been put into creation in order to find solace and purpose in it. So it’s perfectly natural the pandemic has forced us into our original calling in many ways.”

NEXT: Volunteer hours during COVID add up to thousands of reasons for hope