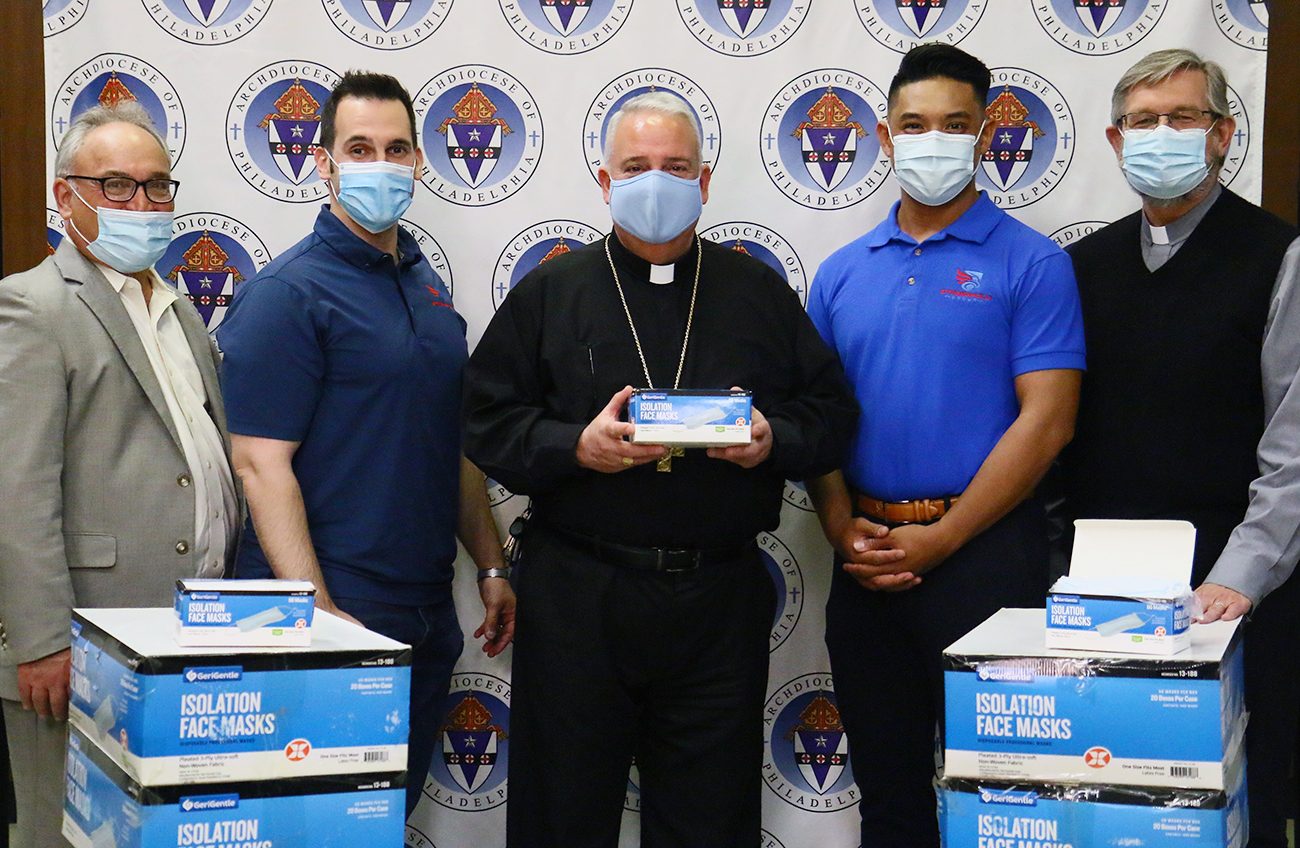 As an altar boy, RJ Lualhati never dreamed his pastor would one day become the Archbishop of Philadelphia – or that he himself would track down his childhood mentor to provide some much-needed help in the fight against COVID.

On April 21, Lualhati, a business development manager and senior engineering specialist, visited Archbishop Nelson Pérez bearing a timely gift: some 250,000 disposable three-ply face masks for use by archdiocesan Catholic Social Services (CSS) and those it serves throughout the five-county area.

The donation was part of an ongoing effort by the Philadelphia-based Stronghold Group. Since 2016, the firm’s team — comprised of Iraq and Afghanistan war veterans – has provided a comprehensive line of high-quality personal protective equipment (such as masks, face shields and gowns) to the U.S. government and military, as well as to private companies and non-government organizations.

Archbishop Pérez said he “was blessed to work” with the Stronghold Group on the donation, while archdiocesan Secretary for Catholic Human Services said the face masks met “a very compelling and important need” among CSS’s residential programs – particularly those focusing on intellectual disabilities (IDD), dependent teens and adults experiencing homelessness.

CSS chief financial officer and permanent deacon Franz Fruehwald added that for the agency’s clients with IDD, disposable (rather than reusable cloth) face masks were the only viable option due to health and regulatory requirements.

“These are a godsend,” he said. “They could go through thousands of these in a week.”

Last month, Stronghold made a similar donation of face masks to the School District of Philadelphia, and while searching for another nonprofit recipient, the group’s founder and chief executive officer Dave Henderson asked Lualhati if he had any contacts at the Philadelphia Archdiocese.

“And I said, ‘Well, the head guy was the priest I served under as a kid,’” recalled Lualhati with a laugh.

During his years at the former St. William Parish School in the city’s Lawncrest section, now 26-year-old Lualhati “got really close” with then-Msgr. Pérez while assisting at liturgies.

“Any time he entered the room, I felt like he was always there to have an open ear,” said Lualhati. “He knew every person’s name in our parish, first and last. He was the biggest teddy bear ever.”

“Every time I saw the news, I was like, ‘Oh, wow,’” said Lualhati, who also works full-time for Johnson & Johnson as a 3D-printing medical device designer.

Reconnecting with the archbishop was a moment to come “full circle,” he said, noting that his Catholic school education – which included an undergraduate degree from La Salle University, where Archbishop Pérez taught from 1994-2008 – “defines what (he lives) by now.”

“If you have that spirit, that goal, that fundamental principle to be dedicated to what you’re doing – it will always take you to places you would never think of going,” he said.

NEXT: Bambies rediscover God, and one another, during spring retreat