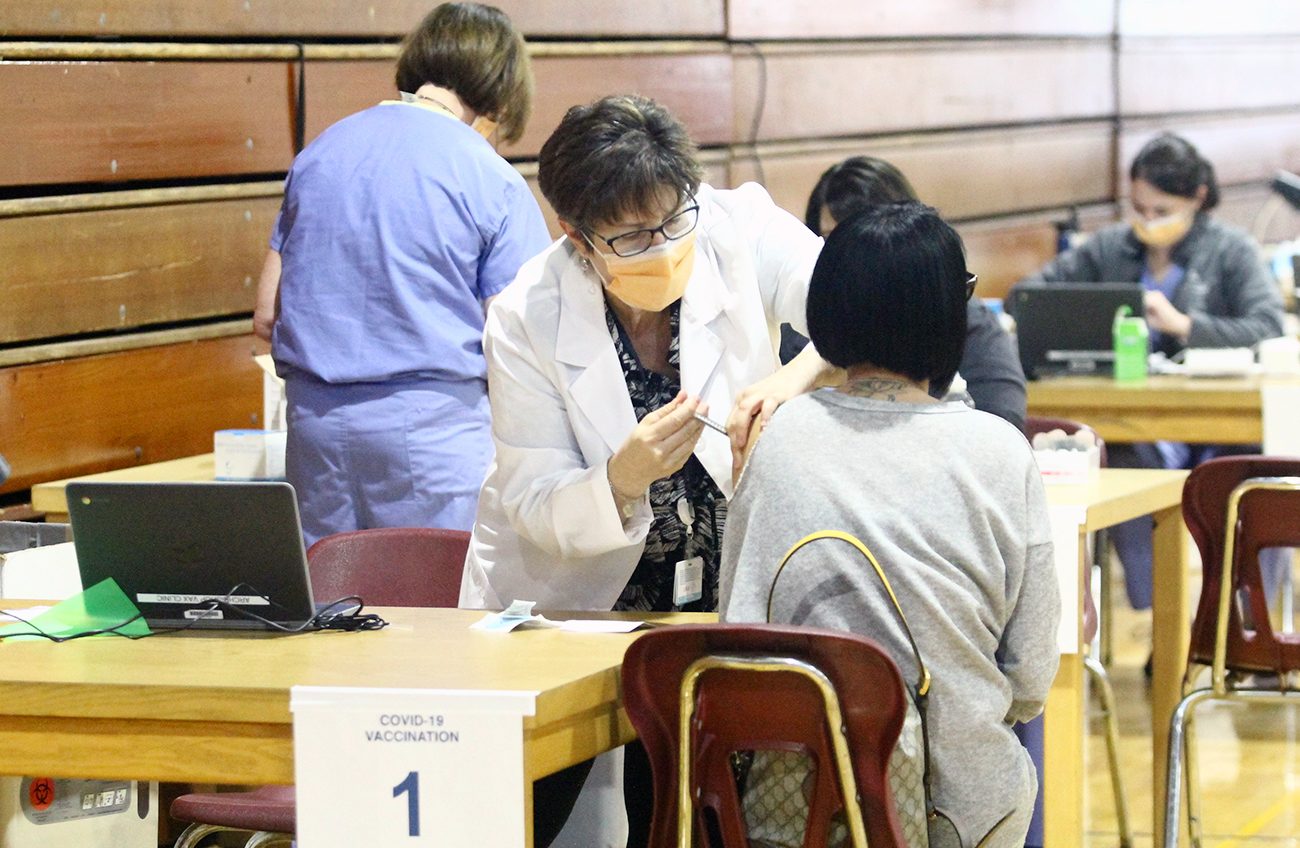 A Philadelphia educator receives the second dose of the Pfizer COVID-19 vaccination at a March 31 clinic hosted by Archbishop Ryan High School. The initiative was the result of a collaboration among Children's Hospital of Philadelphia, the archdiocesan Office for Catholic Education, Faith in the Future, the School District of Philadelphia and independent schools. (Sarah Webb)

Hundreds of local educators received their COVID vaccinations last week at an area Catholic high school, thanks to a collaboration among Children’s Hospital of Philadelphia (CHOP), the archdiocesan Office for Catholic Education (OCE), Faith in the Future, the School District of Philadelphia and independent schools.

On March 31, that partnership saw more than 500 second doses of the Pfizer jab administered by CHOP medical professionals at Archbishop Ryan High School in Northeast Philadelphia.

Greeting staff and clients at the clinic was Archbishop Nelson Pérez, who thanked CHOP team for its “always awesome” work, including a successful cardiac surgery performed on an infant to whom he had ministered some 20 years prior.

Based on detailed logistical protocols developed by CHOP, the Archbishop Ryan gymnasium was transformed into what Philadelphia teacher Joann Buckley described as a “very professional, very smooth” staging area for the vaccinations.

Archbishop Ryan principal Joseph McFadden agreed, saying the project “didn’t put any pressure on the school,” while board president Michael Barnett added that the coordinating organizations “focused on a common goal” of having “as efficient a site as possible.”

Both school officials pointed to the brisk yet thorough pacing of clinic activities, which kept traffic flowing while ensuring that “those coming in were kept separate from the population of the school,” said Barnett.

For CHOP, that number was more than manageable, since setting up the clinic was essentially a matter of taking a well-rehearsed show on the road, said the hospital’s chief safety and quality officer Dr. Daniel Hyman, a clinical professor of pediatrics at the University of Pennsylvania’s Perelman School of Medicine. 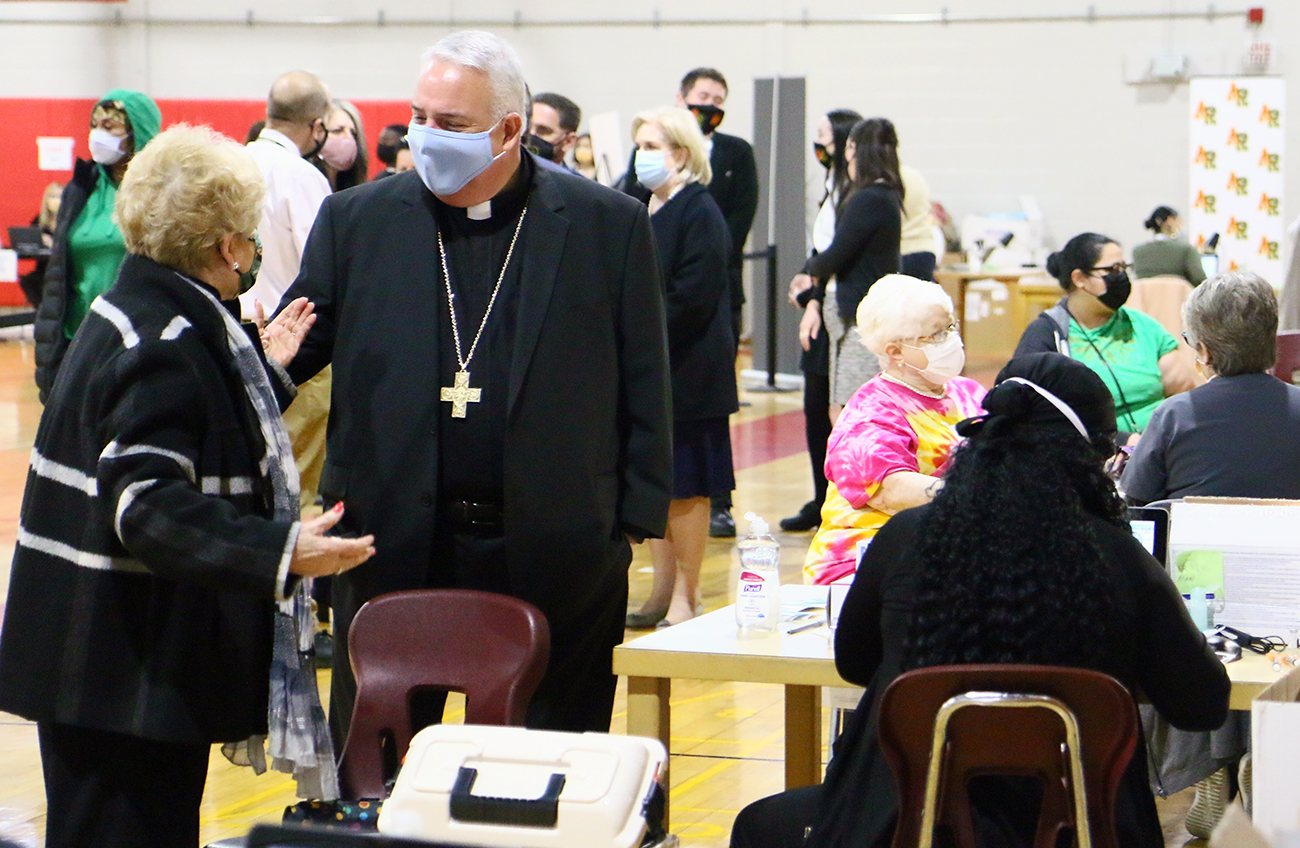 Archbishop Nelson Pérez speaks with a client at a March 31 COVID vaccination clinic for teachers hosted by Archbishop Ryan High School in partnership with Children’s Hospital of Philadelphia, the archdiocesan Office for Catholic Education, Faith in the Future and independent schools. (Sarah Webb)

Back in December, the pediatric hospital had to develop a vaccination program for its 20,000 employees, who were in the first cohort eligible for the jabs. Once the final shots had been given, the CHOP team looked for ways to share its mass inoculation strategy more broadly.

“We decided that one of our core missions as a hospital is to improve the health of children, and we know that having kids out of school has been really harmful to them in terms of their mental … and physical health,” said Hyman.

As a result, the hospital set its sights on vaccinating 20,000 Philadelphia teachers, with an eye to making the clinics “close to where people live” throughout the city, he said.

Also essential to the task were “issues of equity” and concerns that “teachers across all racial and ethnic groups had access to vaccines,” Hyman added.

“Well over two to three thousand” CHOP employees – among them, nurses, doctors and respiratory therapists – have participated in the clinics, which over the past six weeks have operated for 12 hours per day, six days per week, said Jean Anne Cieplinski, CHOP’s senior director of critical care nursing.

“You need good planning and good organization, of course, but you need the people to get it done,” said Irene Horstmann Hannan, CEO of Faith in the Future. “We counted on volunteers, and they did it.”

At present, some 89% of instructors at archdiocesan elementary school will be fully vaccinated by the mid-April, according to secretary for elementary education Dr. Andrew McLaughlin.

Speaking after her second dose at the clinic, Rita Schwartz, president of the National Association of Catholic School Teachers, said it was “very important” that teachers are vaccinated in order to “get back to some kind of normal.”

Barnett said hosting the clinic at Archbishop Ryan showed “the spirit of Catholic education” and the leadership it inspires.

“We’re not just miming our faith,” he said. “We’re putting it into action in a way that helps our community.”

PREVIOUS: Charity invites proposals for grants with May 3 deadline

NEXT: Gun violence calls for the Gospel message in action, say local pastors