Persons with disabilities lead us to do ‘our very best,’ says archbishop 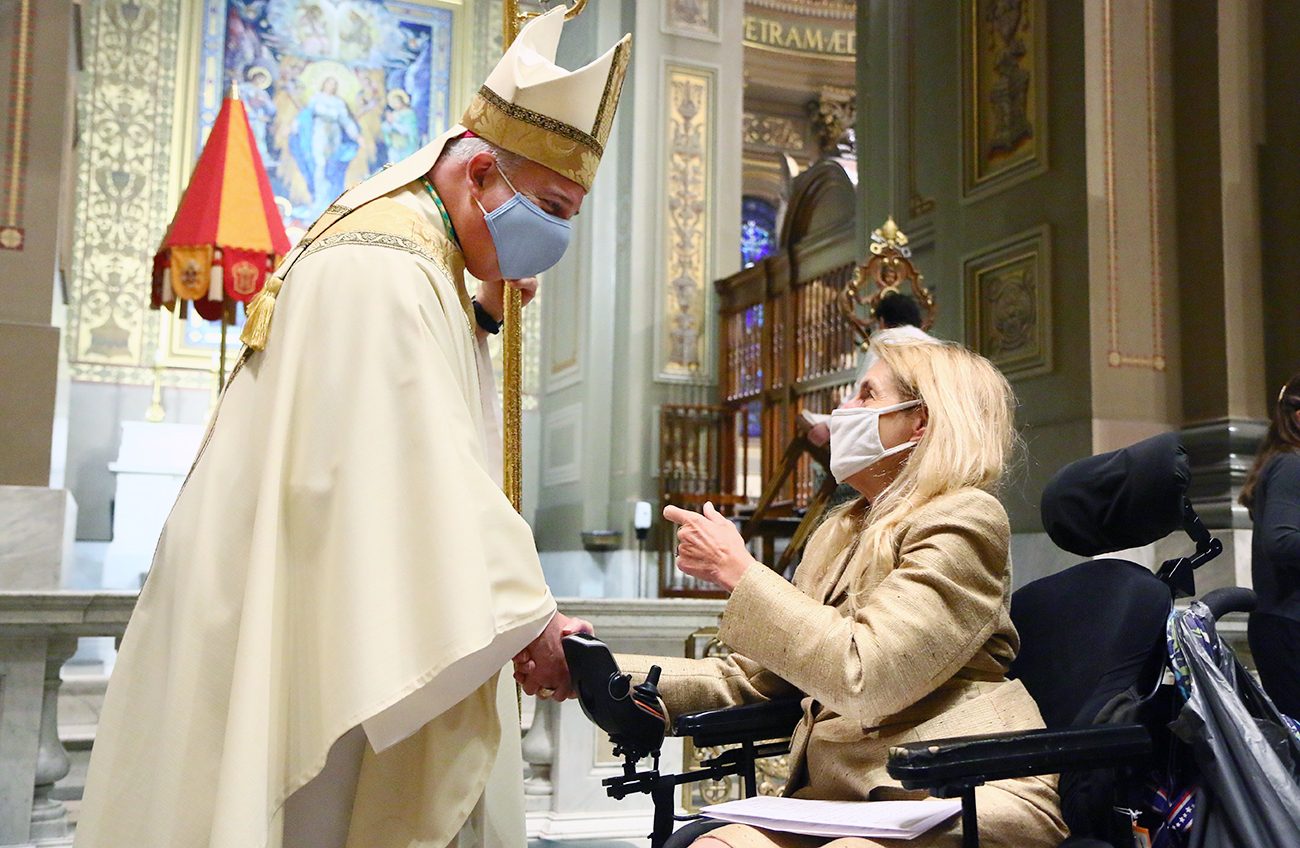 A participant greets Archbishop Nelson Pérez following an April 25 Mass for persons with disabilities at the Cathedral Basilica of SS. Peter and Paul. DUring his homily at the annual liturgy, which has been celebrated in the archdiocese for some three decades, the archbishop said those with disabilities have the power to be "shepherds" who lead us to a deeper relationship with Christ and others. (Sarah Webb)

Persons with disabilities share with Christ the “power to be shepherds,” leading others to do “their very best,” said Archbishop Nelson Pérez.

On April 25, the archbishop was the principal celebrant and homilist at the annual Mass for Persons with Disabilities, drawing some 275 faithful from throughout the area to the Cathedral Basilica of SS. Peter and Paul.

The liturgy has been a tradition for at least three decades, said Immaculate Heart of Mary Sister Kathleen Schipani, director of the archdiocesan Office for Persons with Disabilities and the Deaf Apostolate, which sponsor the Mass.

(Related: View a photo gallery from the annual Mass for Persons with Disabilities.)

Three American Sign Language (ASL) and two tactile interpreters (who relayed information directly to participants’ hands) assisted throughout the liturgy, at which a number of persons with disabilities served – among them, Deacon William Griffin of the Deaf Apostolate and himself a member of the Deaf community, and Mary Rose Baltes and John Doughty, who proclaimed the Word.

The schola of St. Christopher Parish in Philadelphia, under the direction of Don Holdren and Patricia Gallo-Terrenzio, accompanied Cathedral music director and cantor Charlene Angelini and organist Mark Lori.

Reflecting on the day’s Gospel, taken from Jn 10:11-18, Archbishop Pérez said Jesus’ revelation of himself as the Good Shepherd invites us to discern the Lord’s presence in those around us.

“In a very real way, the people that care for you are a manifestation of the Good Shepherd,” said the archbishop. “Through them … you experience God’s love and his care for you.”

At the same time, he said, those with disabilities are “persons with abilities” who “have this special power” to “in a very grace-filled way” inspire others to become more like Christ.

Admitting that he was “a city boy” who “never saw a sheep” until he came to Pennsylvania, the archbishop said he had the opportunity to watch a shepherd in action while visiting Israel a few years ago. 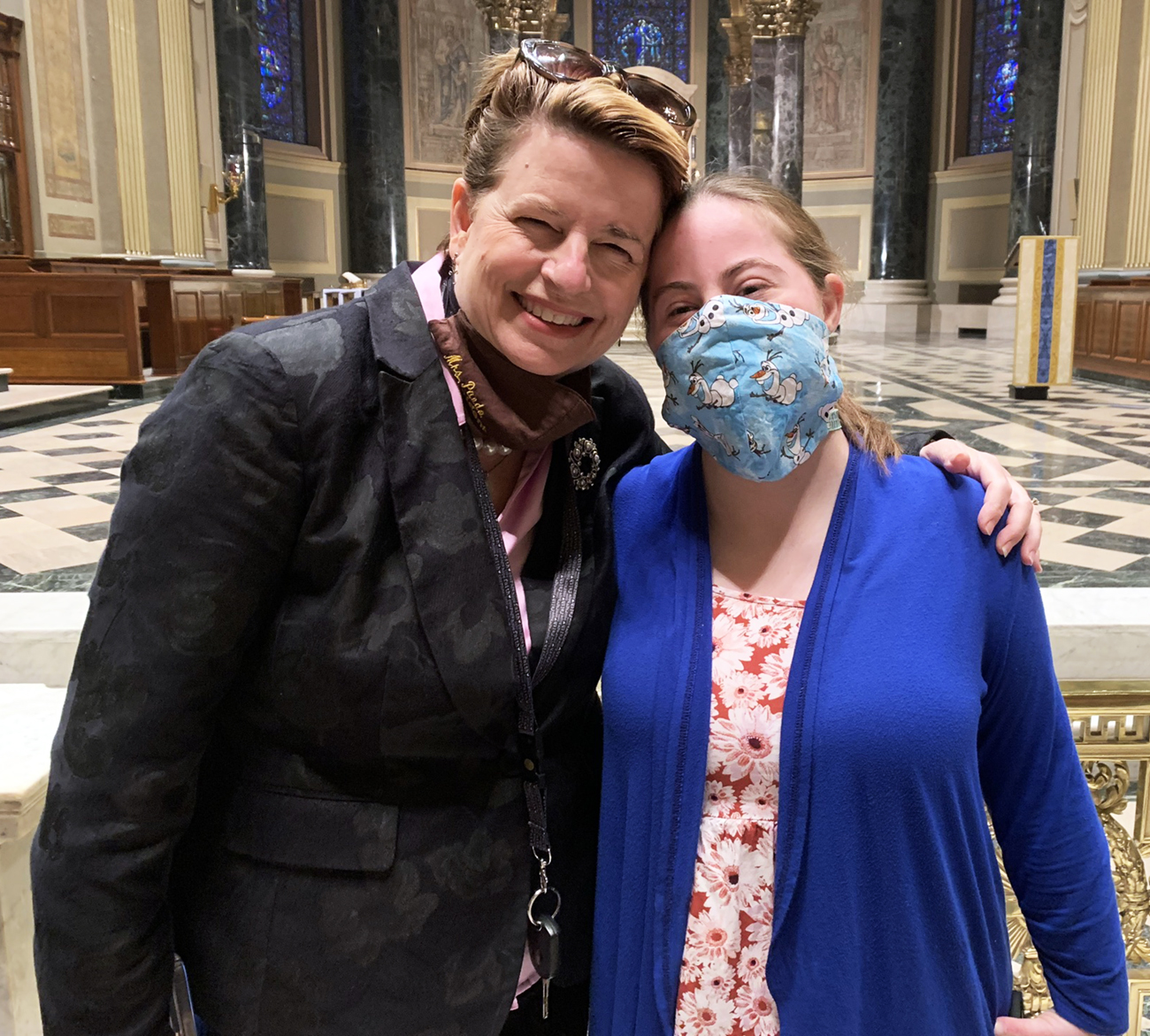 Lizanne Pando, principal of St. Hubert Catholic High School for Girls in Philadelphia, and daughter Jenna shared a smile following an April 25 Mass for Persons with Disabilities celebrated by Archbishop Nelson Pérez at the Cathedral Basilica of SS. Peter and Paul. (Gina Christian)

For the most part, the shepherd simply “walked in the midst of his sheep,” while at other times he strode ahead of the flock to direct it to a grazing site.

In the same way, said Archbishop Pérez, Jesus mostly “walks with” or “definitively leads” us, and occasionally – like the Israeli shepherd – “give us a little kick to get us back in play” when we stray.

Ultimately, the shepherd “wants his sheep to be the best sheep they can be,” he said.

“I would invite you persons with abilities to think of an example of how … you helped other people be the best person they could be – the best aide, the best nurse, the best (parent) or teacher,” said Archbishop Pérez.

Faithful gather as a community of persons with shared abilities and disabilities, he added.

That same spirit was evident in the inaugural One Body in Christ awards, which Sister Kathleen presented following Communion.

Inspired by Rom 12:5 – which describes faithful as “members of one another” united in the Lord – the honor recognized those who “show a passion and commitment for promoting the inclusion of persons with disabilities within the life of the church,” she said.

Jean Calvarese-Donovan, administrator of Catholic Social Services’ Divine Providence Village (DPV), accepted the award for the efforts she and the DPV team have made to make COVID-19 vaccines available to those with intellectual disabilities and autism.

“We gave out the vaccines as a way to honor the people we lost,” she said afterwards, describing the Mass as a “moving” and “beautiful” experience.

Frank Tosti, principal of St. Katharine of Siena School in Wayne, and members of the Schuller family were also presented with the honor for promoting inclusive Catholic school education.

Peg and Mike Keenan of St. Jude Parish in Chalfont said the annual Mass was “a shot in the arm” for them and their 28-year-old daughter Monica, a graduate of the archdiocesan Our Lady of Confidence School in Willow Grove.

“It just renews my love for the Lord,” said Peg Keenan. “It’s kind of like going to the March for Life in Washington. We get to go back and to keep being pro-life.”

In particular, “people with intellectual disabilities and autism” long to know they are welcome at parishes, said Sister Kathleen.

“Even though there might be some difficulty in behavior, or times when they might be louder than the other people in responding at Mass, families need to feel like they belong,” she said.

That desire prompted Melissa Monser of St. Anthony of Padua Parish in Ambler to attend the April 25 Mass.

“It’s always good to be here with everyone,” said Monser, who uses a wheelchair due to Friedrich’s ataxia (FA), a form of muscular dystrophy that affects some 50,000 worldwide. “When you’re surrounded by other people with disabilities, you feel more comfortable.”

At the same time, Monser’s faith makes her feel “really, really at home in church” anywhere.

PREVIOUS: Worlds of difference, but one faith, one family at annual gathering