Worlds of difference, but one faith, one family at annual gathering 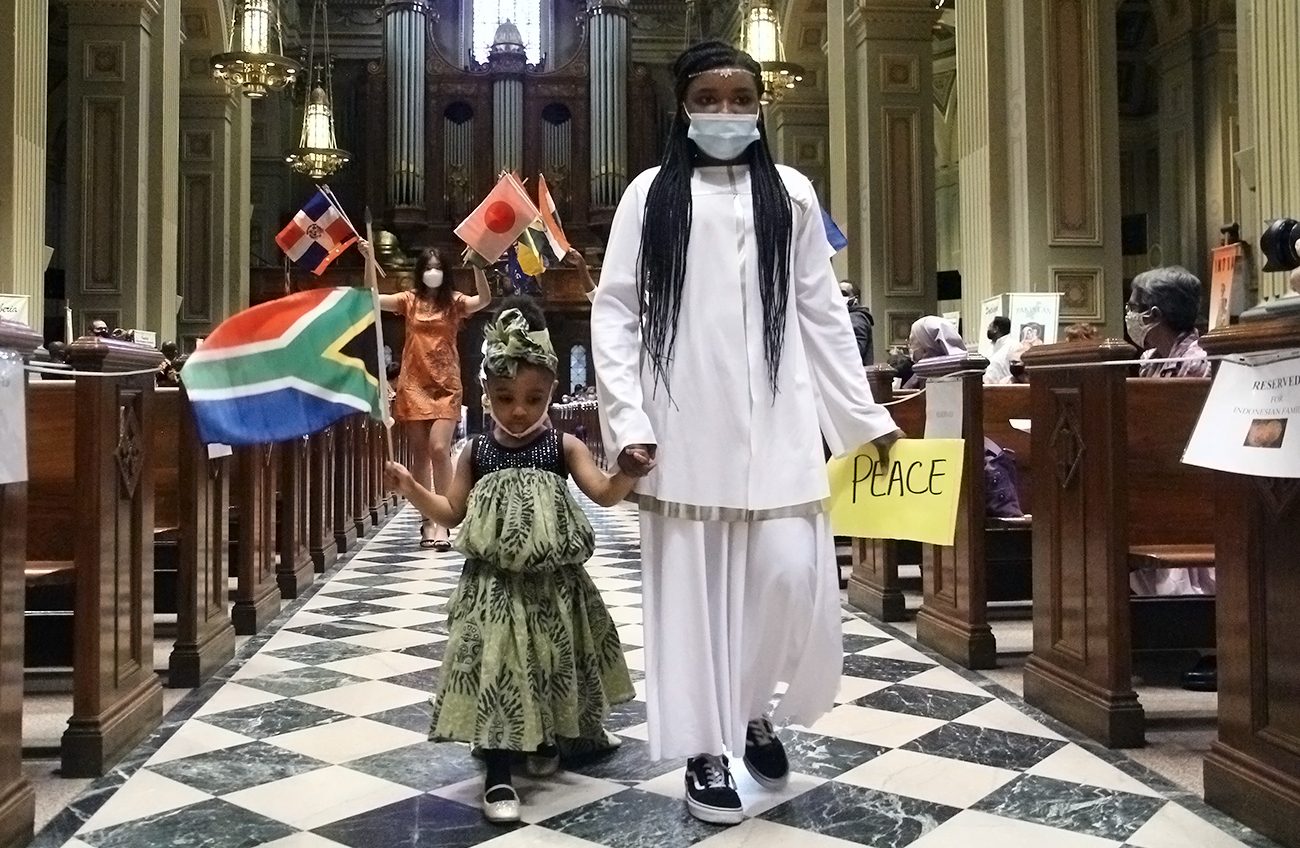 Young participants process down the aisle at an April 24 Cultural Heritage Mass celebrated by Archbishop Nelson Pérez at the Cathedral Basilica of SS. Peter and Paul. (Sarah Webb)

Some 300 faithful gathered this past Saturday to display their “cultural splendor” while affirming their unity in Christ.

Archbishop Nelson Pérez was the principal celebrant and homilist for an April 24 Cultural Heritage Mass at the Cathedral Basilica of SS. Peter and Paul. The annual liturgy, sponsored by the archdiocesan Office for the Pastoral Care of Migrants and Refugees (PCMR) and the Pontifical Mission Societies, drew participants representing dozens of traditions, including Native American, Asian, African, European, Hispanic, Caribbean and Brazilian.

(See a gallery of photos from the Mass here.)

Many in the pews wore traditional attire, while readings, prayers and hymns were offered in multiple languages, among them Filipino, Haitian Creole, Hindi, Igbo, Indonesian, Kenyan, Lithuanian, Malayalam, Polish, Tamil, Spanish and Vietnamese.

Prior to the Mass, members of the PCMR Young Adult and Youth Ministry performed a liturgical movement sequence to the dance sensation “Jerusalema,” whose lyrics – written in the South African language of isiZulu – are a plea to be guided home.

“As the first Americans, we would like to welcome all cultures,” said Chief Red Feather Brown in her statement, read by Noquisi. “Many cultures, one faith, one family in Christ.”

In his homily, Archbishop Pérez reminded listeners that “unless you are a Native American, you came (here) from someplace else.”

He admitted that as “a country of immigrants,” the U.S. has “had a long history, with ups and downs and bumps and bruises.” 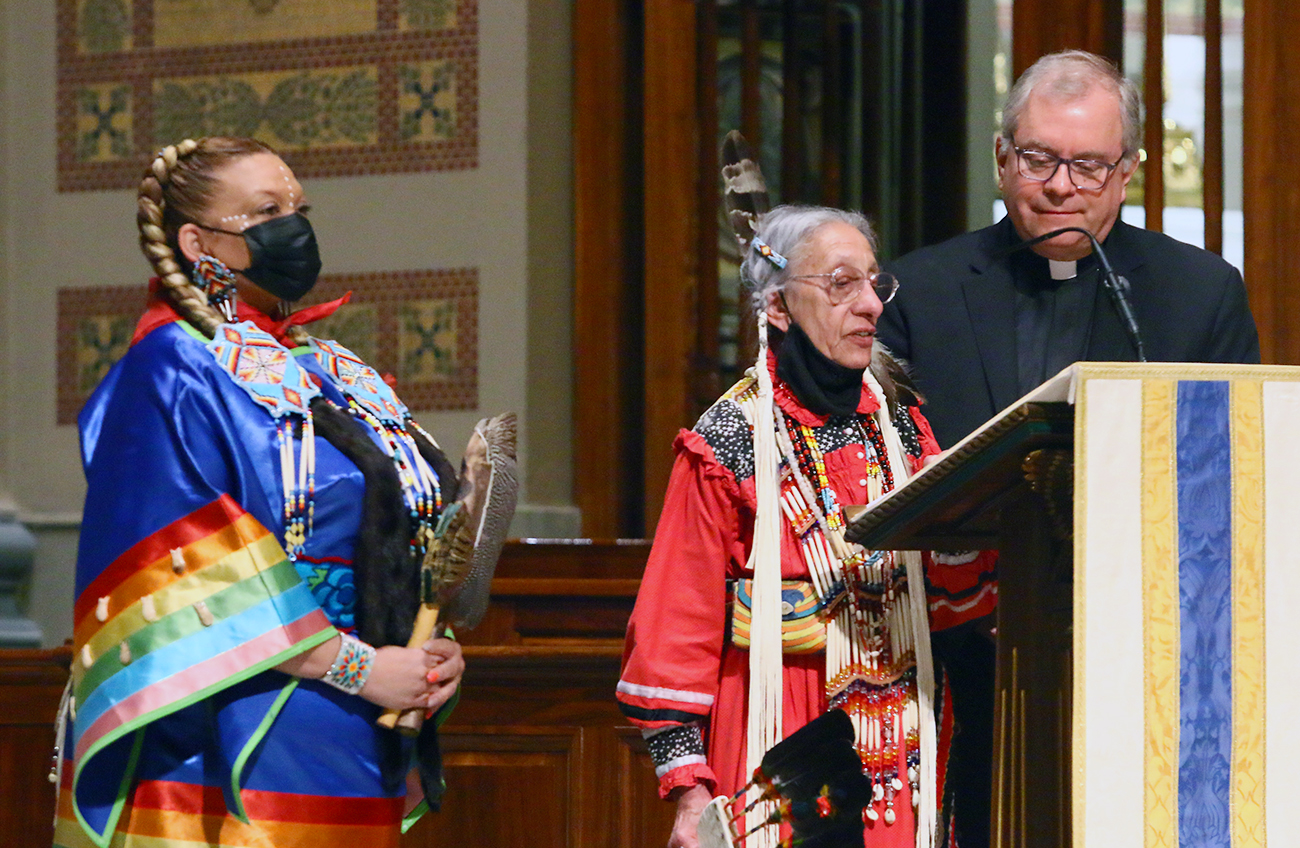 Church teaching has long emphasized the complementary relationship between the Catholic faith and culture. In 1939, Pope Pius XII called for a deeper “understanding of the civilizations and institutions of various peoples … to cultivate their best qualities and gifts.”

The Second Vatican Council broadened this effort in the document “Gaudium et Spes,” and in 1982 Pope John Paul II established the Pontifical Council for Culture.

Reflecting on his own experiences as the son of Cuban immigrants, Archbishop Pérez said building a new life in a different country can be “tough, challenging, difficult.”

“Sometimes the wider culture around us, the dominant culture, doesn’t welcome us all that much,” he said. “Even within the church, sadly.”

Yet amid such hardships, he said, “you knew that the church was your home, your spiritual home.”

The expansion of the Catholic faith across the globe is a marvel, given the small number of believers at the time of Christ’s ascension, said the archbishop.

“It all began because this group of 11 courageous men gathered on the Mount of Olives and were faithful to a mandate … to spread the Gospel of Jesus Christ to all the nations,” he said. “Somehow, some way, through the gift of the Spirit, (missionaries) managed … over time to visit each one of the countries in the world.”

In his post-Communion remarks, Father Esmilla noted that missionaries (who accompanied Portuguese explorer Ferdinand Magellan) arrived in the Philippines on March 17, 1521, with the first celebration of Mass there taking place just over a week later on Easter Sunday.

Today, Filipino immigrants throughout the world “live their faith in any Catholic church, believing and trusting in God’s love for strength and support in a strange country,” said Father Esmilla.

Gathering for Mass provides reassurance and solidarity, especially amid the isolation created by the pandemic, said Maria Nguyen, part of the Vietnamese community at St. Helena Parish in Philadelphia.

“It’s been over a year since COVID-19, and for all of us as Christians to be able to celebrate is just a blessing,” she said.

“We who are coming from different countries and cultures … have encountered Jesus, and in this encounter we have built up our PCMR community,” said Religious of the Assumption Sister Gertrude Borres, director of the PCMR office.

At the same time, there is more work to be done to redress cultural and ethnic inequities, said Noquisi, whose shawl was emblazoned with a red hand print — the symbol of the Murdered and Missing Indigenous Women’s advocacy movement, whose national day is May 5.

According to the Centers for Disease Control, Indigenous women — for whom homicide is the third leading cause of death — are murdered at a rate 10 times higher than that of other ethnic groups.

“It has to be brought to attention,” said Noquisi. “This is the new battle that we have to fight.”

The significant presence of young people at the liturgy marked a “hopeful” and “joyful” moment, and they are called to renew the world and heal its wounds, said Archbishop Pérez.

He quoted an address by Pope Francis at the 2016 World Youth Day in Krakow, in which the pope said Jesus invites youth “to leave a mark on history.”

“He, who is truth, is asking you to abandon the paths of rejection, division and emptiness,” the pope continued. “Are you up to this?”

“And the hope of the Holy Father and all of us is that you are,” said Archbishop Pérez. “In the world of the young heart, differences are not as powerful. You have something to teach us: do it with pride, do it with joy and do it with passion.”

NEXT: Persons with disabilities lead us to do ‘our very best,’ says archbishop