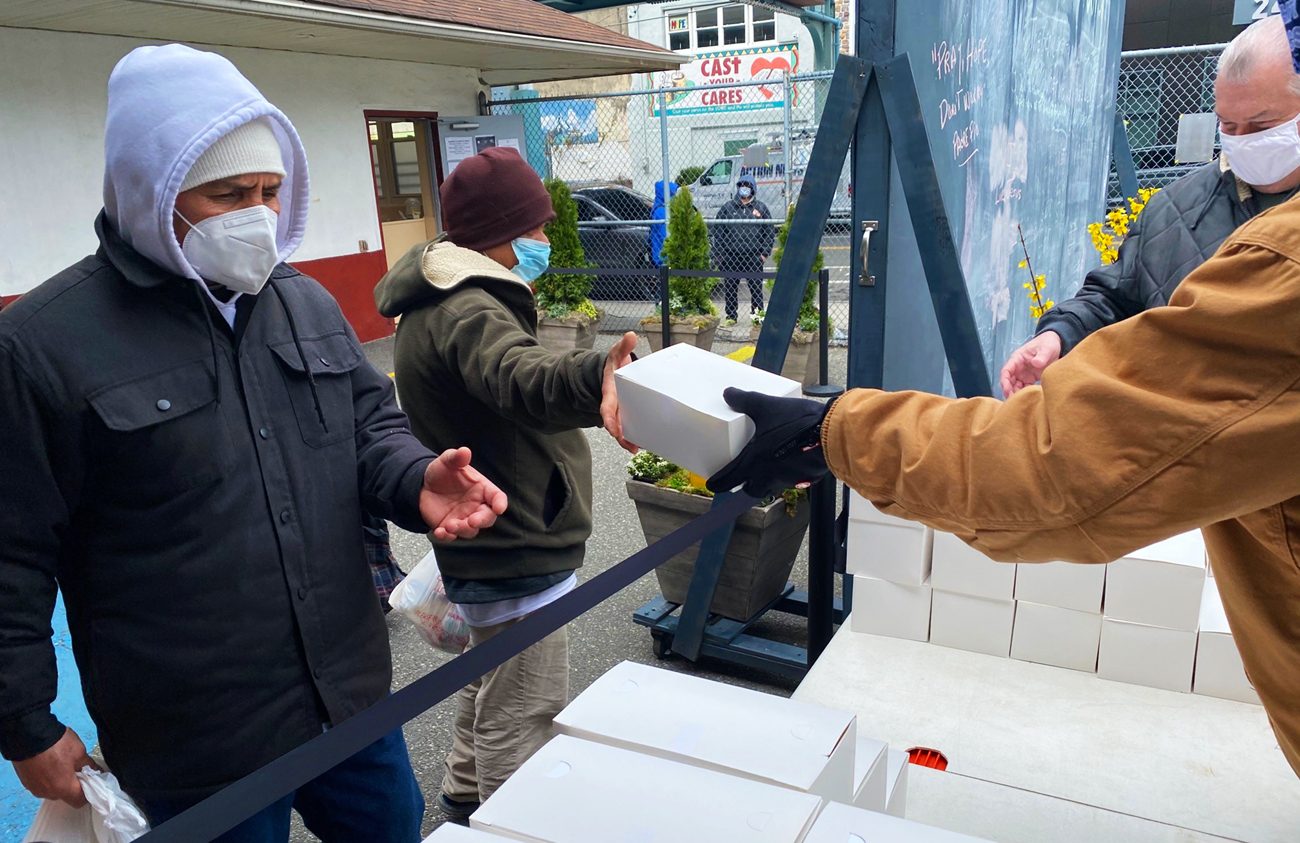 Philadelphia police officers and archdiocesan staff teamed up Good Friday to bring “hope and love” to one of the city’s most troubled neighborhoods.

Some 200 meal boxes containing sandwiches, juice, applesauce and grain bars were handed out by the group this morning at the Kensington-based St. Francis Inn. Founded and operated by the Franciscan Friars of the Holy Name Province, the center provides food, clothing and hospitality to hundreds of clients each day.

“We think it’s really important on this holy of holiest days that we are of service, because this is the day that Christ died for us,” said Lizanne Hagedorn, executive director of Nutritional Development Services (NDS).

For close to five decades, the agency has delivered millions of breakfasts and lunches to area children through federally funded school meal programs, while stocking a large network of community food cupboards.

NDS collaborated on today’s effort with the Michael the Archangel Ministry of the Philadelphia Lodge #5 Fraternal Order of Police. Named for the patron of police officers, the ministry — which chaplain Oblate Father Steven Wetzel describes as “multidenominational, rather than nondenominational” — provides pastoral care, crisis ministry and spiritual enrichment opportunities.

“This is the first time we were able to work with Father Wetzel on Good Friday,” said Hagedorn. “We’ve worked with him before on other food giveaways, and we’re just so honored and proud to be able to do this with the FOP and help them with the good work they’ve been doing.”

FOP President John McNesby and Philadelphia Police Captain John Moroney were among those handing out the meal boxes at the St. Francis Inn courtyard, which also featured a large chalkboard with inspirational messages – including a favorite maxim of St. Pio of Pietrelcina (Padre Pio), “pray, hope and don’t worry.”

That directive might seem daunting given the 47% poverty rate in Kensington, a once-thriving industrial hub whose factories began shuttering in the 1960s due to economic and population shifts.

In recent years, the neighborhood has become a “ground zero” for the opioid crisis. Open-air drug use, trafficking, prostitution, homelessness and violent crime have become commonplace, leading SEPTA to temporarily shutter an elevated train transit stop at Somerset Street for the past two weeks.

Hagedorn admitted that today’s giveaway was “a drop in the bucket (compared to) what the people on the streets are going through.”

At the same time, she said, Christ’s sufferings compel his followers to seek out and comfort those who are struggling.

“The cross is about hope and love, and we’re spreading a little love here today,” she said.

NDS driver Don Devlin added that the food distribution reminded clients “they are not forgotten.”

“This is what Jesus would want us to do,” said Hagedorn.

NEXT: Watch the Easter Vigil Mass tonight from cathedral