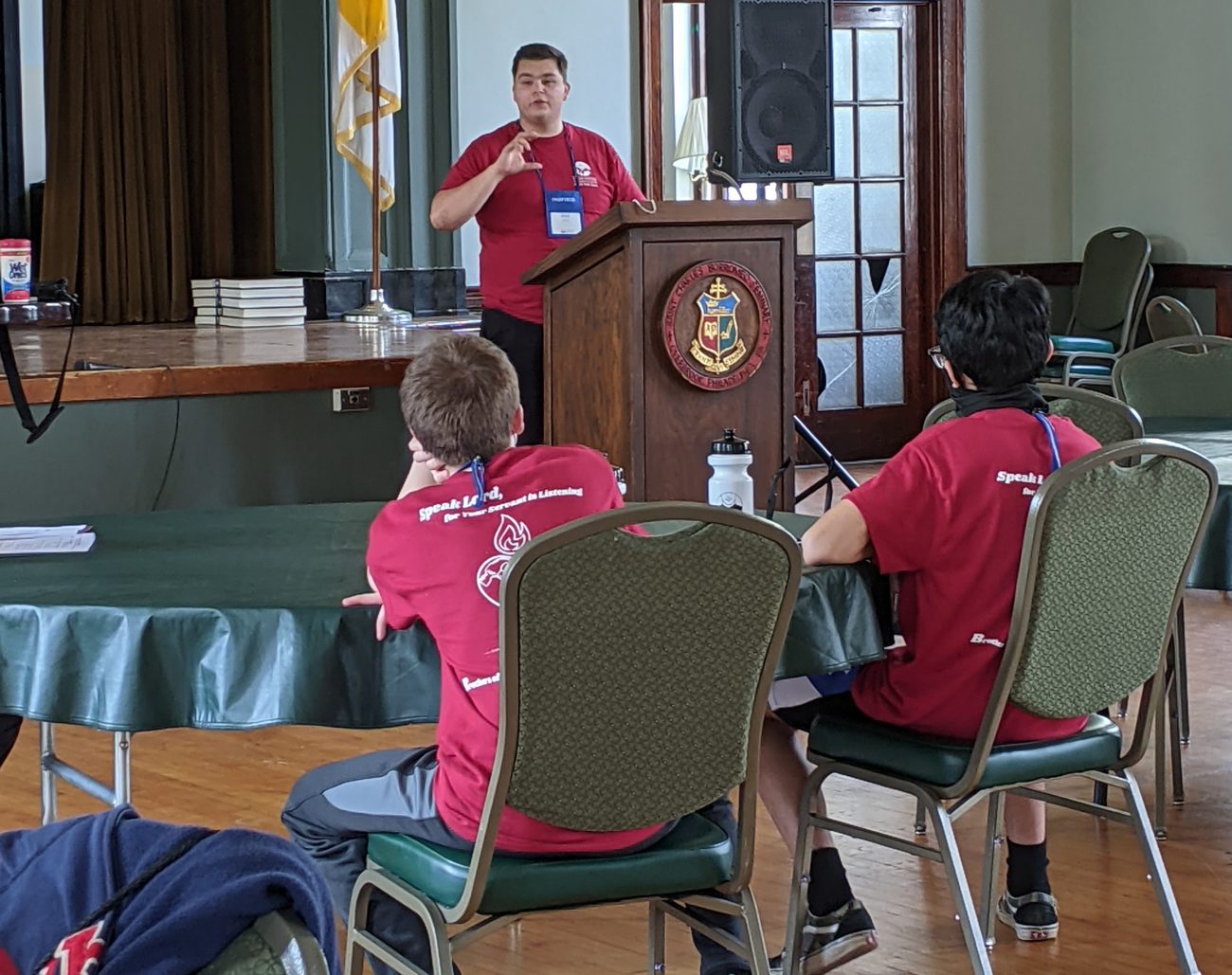 Seminarian Alex Cross talks to the boys about practical ways to discern God’s will in one’s own life.

Fifteen middle school young men joined the Vocation Office for the Diocesan Priesthood on April 9 for the Brothers of Borromeo Vocation Camp (BBVC).

In a day of socially distanced fun, the young men learned about vocations and enjoyed outdoor games, talks, prayer and fellowship on the campus of St. Charles Borromeo Seminary, Wynnewood.

BBVC has been a tradition for the Philadelphia Archdiocese’s vocation office for about 10 years, offering young men in grades six to eight a solid introduction to vocations. While last year’s camp was cancelled due to the coronavirus pandemic, the event returned this year with appropriate social distancing and safety measures.

“The camp focuses on vocation (as) something you discern and pray about,” said Father Stephen DeLacy, the vocation director.

Activities and talks centered around the camp’s twofold theme: “Speak Lord, for Your Servant is Listening;” and St. Joseph.

The scriptural phrase comes from 1 Samuel 3:8-10 in which a young Samuel is being called by God, and the priest Eli instructs him to respond to the Lord with those words. The verse is also the Vocation Office’s theme for the year.

St. Joseph, known for his humility and obedience to God’s will, was a natural addition to the theme, especially during this Year of St. Joseph. Pope Francis declared the special year in honor of the 150th anniversary of the saint being declared patron of the universal church.

The opening talk of the day introduced St. Joseph, his vocation and his life of virtue. Presenter Brett Illig highlighted how the saint became holy in the context of a family, and by staying close to Jesus and Mary.

A husband and father himself, Illig is also a parishioner of St. Ann Parish, Phoenixville and a former professional baseball player for the Los Angeles Dodgers and New York Mets.

According to Illig, in St. Joseph’s vocation as protector, the saint conveys the meaning of masculinity.

Referring to St. Joseph as an “average Joe,” Illig pointed out that he was unknown and simple. In a culture focused on social media influencers, it is important to remember that sainthood is about doing the will of God in your life, he pointed out.

“It is more heroic to do the small hidden things every day, than a one-time heroic act,” Illig said.

After a small group session led by seminarians of the Philadelphia Archdiocese, participants split into two groups for breakout activities. One group did a carpentry activity, in the spirit of St. Joseph’s career, creating a cross out of wood, nails and string.

They jumped through hula-hoops representing the rocky desert terrain, and built a tent in the field outside the College Building.

Seminarians posed as Herod’s soldiers and thieves on the pathway to the seminary’s Theology Building, representing the dangers St. Joseph encountered on his journey. Since St. Joseph would have prayed the psalms daily, participants also proclaimed a psalm from the choir loft of St. Martin’s Chapel.

At the heart of the day was a holy hour with exposition of the Blessed Sacrament, a meditative examination of conscience and the opportunity for the sacrament of reconciliation.

Since a vocation “is something you pray about … we introduce them to a holy hour,” said Minnich. Some participants told her this was their favorite part of BBVC.

Leading the holy hour was Father David Friel, who will assume the role of vocation director for the archdiocese this summer. Father DeLacy is entering a new role as the head of the newly formed Office for Faith Formation for Youth and Young Adults.

The day ended with the Divine Mercy chaplet, fitting as BBVC took place one day before Divine Mercy Sunday. Participants’ families were invited to join in praying the chaplet as well.

As the young men end an unprecedented school year and some prepare to enter high school, they left the camp implanted with the seeds of vocational discernment.