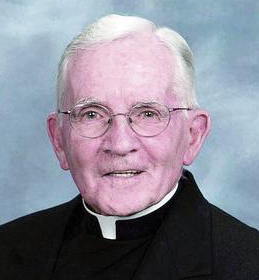 He was born on April 16, 1921, in Philadelphia, son of the late Francis J. Cornely and Anna Margaret Powers. He attended St. Laurence School in Upper Darby and West Catholic High School in Philadelphia, before entering St. Charles Borromeo Seminary.

Father Cornely was ordained on May 22, 1948 at the Cathedral of SS. Peter and Paul, Philadelphia by Bishop J. Carroll McCormick.

Reception of the Body will be held at St. Robert Bellarmine Church, Warrington on Friday, April 23 at 10 a.m. followed by a viewing.

Archbishop Nelson J. Pérez will celebrate the funeral Mass at 11 a.m. Concelebrating the Mass will be Father James F. Endres, Msgr. Daniel J. Sullivan and Msgr. James D. Beisel, who will also be the homilist.

Father Cornely is survived by many nephews and nieces, great- and grand-nieces and nephews.