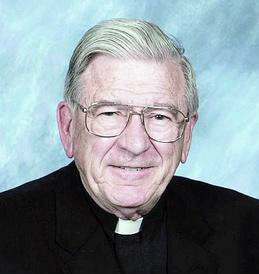 He and his classmates were ordained priests by Archbishop John F. O’Hara on May 11, 1957 at Immaculate Conception Church in the city’s Germantown section, at a time when the Cathedral of SS. Peter and Paul was closed for renovations.

Msgr. Curran served as parochial vicar, St. Ann Parish, Lansford. He was on the faculty of Cardinal Dougherty High School, and served as a student priest at the Catholic University of America in Washington, D.C.

In 1987 he was appointed pastor of St. Albert the Great Parish, Huntingdon Valley and named pastor emeritus in 2006.

Msgr. Curran is survived by his brothers, John (Rosemary), Vincent (MaryDenise), and sister Marie McHale, and many nephews and nieces.

Interment was at Calvary Cemetery in West Conshohocken.

NEXT: Father Francis Cornely, teacher and parish priest, dies at 100