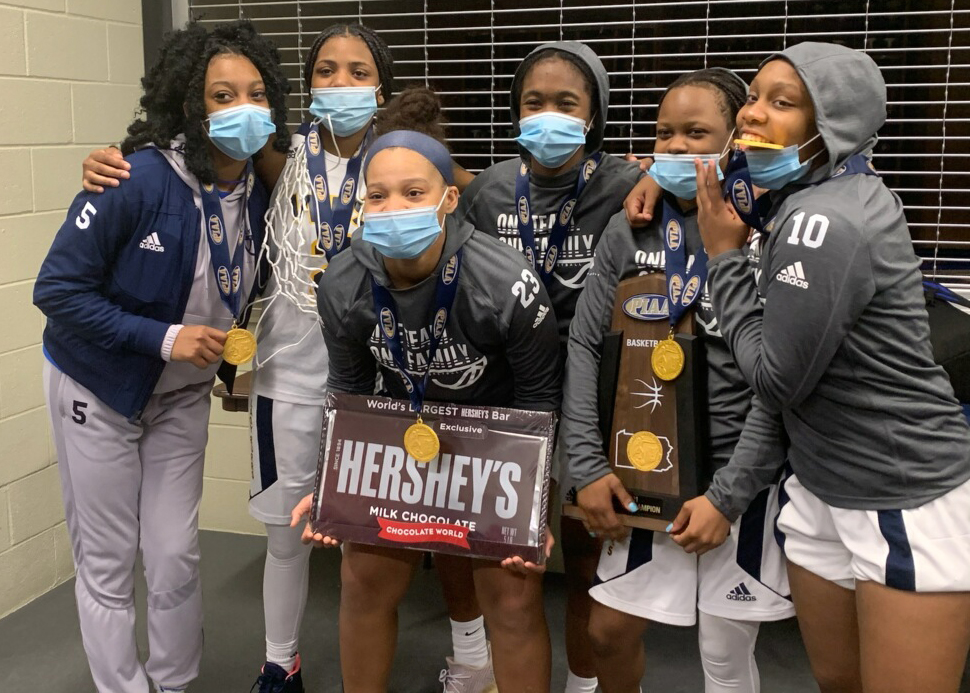 The post-game celebration is on for PIAA Class 3A state basketball champion West Catholic, which captured the title March 25 in Hershey, Pa. (Photo by John Knebels)

Two years ago, West Catholic’s girls’ basketball program was an afterthought. Two years later, it stands proudly among the elite.

The main protagonists behind last season’s 2019-20 Catholic League championship once again shared center stage March 25 in the PIAA Class 3A state final at the Giant Center in Hershey, Pa. Like they had done at the Palestra one year earlier, the Lady Burrs corralled a prestigious title, defeating District 7 champ Mohawk, 67-56, for the school’s first state hoops crown.

“Our league championship was a testament to what’s possible with stubborn belief in a vision and commitment to one another,” said West Catholic coach Beulah Osueke. “With the length of the regular season, we were able to withstand challenges that led to something undeniably special.

“Our state championship revealed that the leadership, resilience and discipline learned in previous years were and are absolutely necessary for sustained success. This season put it all to the test and was the perfect culmination of our previous experiences, the hardships as well as the triumphs.”

During West’s two-year emergence, Destiney McPhaul has been the Lady Burrs’ undisputed standout. A two-time, first-team All-Catholic who scored 30 points in last year’s PCL championship overtime victory over Archbishop Wood, the Virginia Tech-bound guard was chosen as this year’s Catholic League Most Valuable Player. This week, McPhaul was selected as Max Preps’ Pennsylvania Player of the Year.

In the state final, Mohawk double-teamed McPhaul at every opportunity. While she finished with a more-than-competent 16 points, 11 rebounds, three assists and two steals, the Lady Burrs needed someone to inherit the role of go-to shooter. 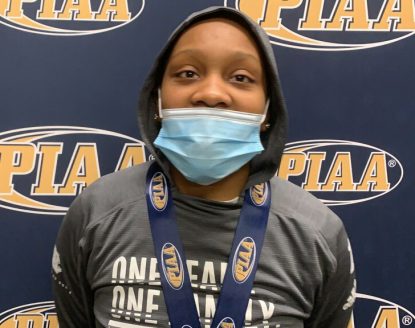 The senior guard stunned the audience by scoring 34 points on 14-for-18 shooting from the floor and a perfect four-for-four from the foul line. She added five rebounds, three steals and a block.

Exactly one week after leaving Hershey with a state championship trophy, Osueke gathered her troops one last time. After collecting uniforms, she informed the Lady Burrs that she would not be coaching next season.

Though an excruciating decision, Osueke feels this is the perfect time to move into a different phase of “giving back” to others through the game she loves. She plans to remain heavily involved in basketball and may return to coaching at a later time. Meanwhile, she is currently planning to orchestrate a special project that will be introduced this summer.

“I loved coaching West Catholic basketball,” said Osueke, 30. “I love and respect all of our players. I can’t thank them enough for trusting me and believing in me.

“The sky is the limit,” she said. “I’m very excited by the possibilities.” 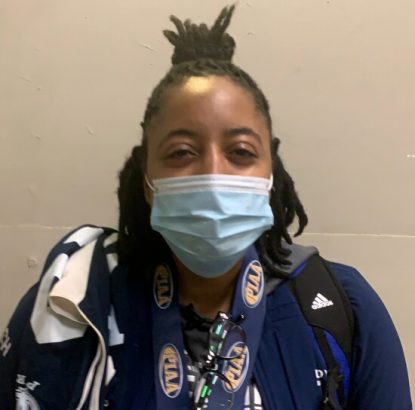 Osueke’s eight-year resume at West is highlighted by a winning record of 80-72, the school’s first PCL title in 22 years, the school’s first-ever state basketball championship, six District 12 titles, being named last season’s PIAA Class 3A coach of the year, becoming the first black coach of either gender to capture a PCL plaque, and becoming the first female coach to garner a PIAA state crown.

“I have the upmost respect for Coach Osueke,” said Conwell-Egan coach Chris Brennan. “I am going to miss her. We aspire to develop our program using her roadmap as a cheat sheet. I am happy for her and sorry to see her leave.”

Added Wood coach Mike McDonald, whose Lady Vikings lost the aforementioned 2019-20 PCL final to West Catholic: “She did an impressive job at West. I really look up to her.”

“This wasn’t one of our ideal games,” said Osueke. “Mohawk had a really good game plan against us. They neutralized Destiney, a nationally ranked player. Other people stepped up. I was encouraged by what I saw. I am really proud of my team. I definitely saw our growth in this game.

Osueke preached teamwork. The Lady Burr players bought in, and it paid off.

The hardware residing in West Catholic’s trophy case proves it.