In the case of Archbishop Wood senior Noelle Baxter, sometimes it doesn’t even tell half the tale.

There were games when Baxter scored a handful of points or fewer. Then you’d talk with someone after the game and they’d say, “That Number 11 is really good.”

“Number 11” might have reached her zenith when the Lady Vikings upended previously undefeated Villa Maria Academy of Erie, 44-34, in the PIAA Class 4A state championship March 27 at the Giant Center in Hershey, Pa.

Quite the accomplishment after scoring … zero points.

“Noelle is irreplaceable for many reasons that don’t show up in the stat sheet,” said Wood coach Mike McDonald, who in six years at Wood has won two Catholic League titles, lost in three PCL finals (two in overtime), and garnered three state crowns in four finals. “She pushed our very talented team into a championship team. She holds herself most accountable and has been willing to shoulder much of blame on the bad days rather than point out whose fault it actually was. This is likely the reason she played her best game in her last and biggest game.

“Mentally, she is at a new level of focus and toughness. She will be one of the most mentally tough people heading into college and the real world.”

While seizing its sixth state crown in nine appearances, the 2020-21 Philadelphia Catholic League champion Lady Vikings played their best basketball during crunch time – the second half.

Those final 16 minutes coincided with Baxter taking over the floor and, like a maestro conducting a prestigious orchestra, finding two high scoring teammates with six of her seven assists over a 10-minute, 3-second stretch that saw an 18-16 Wood lead swell to much more comfortable 34-27 with 3:12 remaining in regulation. 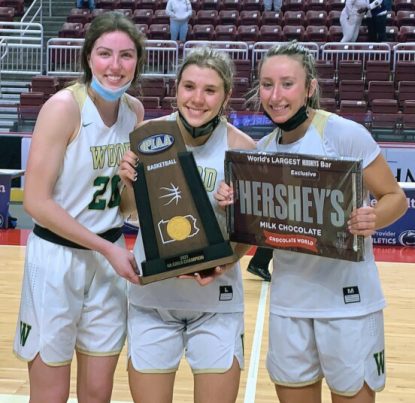 Baxter, a parishioner at Our Lady of Good Counsel in Southampton, finished with four rebounds, two steals, and here’s the most important stat – only two turnovers in 28 minutes.

“When I started playing basketball I had a really good coach in fourth grade – Kari Cairone,” said Baxter. “She was my first coach and she really focused on fundamentals. She taught me the basics. I was a soccer player and I wasn’t very good. So she helped build my game.”

When searching for a high school, Baxter chose Wood because of its traditional excellence in basketball.

She also was excited that Kaitlyn Orihel, her close friend and teammate since fourth grade, would become one of her Lady Viking teammates.

Though accomplished in all phases of the game, Orihel’s staple even in grade school was scoring.

Orihel ended up becoming Wood’s all-time leading scorer this year, her 1,462 points surpassing previous record holder and 2004 alum Pam Rosanio, who went on to star at the University of Massachusetts.

Orihel was also a four-time, first-team All-Catholic, a feat reportedly only done by one other player, Kristen Clement, a 1997 Cardinal O’Hara grad who then played under late legendary coach Pat Summitt at the University of Tennessee.

For the first time since they were 10 years old, the two won’t be teammates. Orihel will play at Villanova; Baxter will play at Kutztown.

Orihel, who scored 25 points in the state final while first-team All-Catholic Ryanne Allen added 17, credits Baxter with much of her success.

“I would not be the player or person I am today if it wasn’t for Noelle,” said Orihel. “She has pushed me to be my best from the beginning and has always brought out the best in me. She’s the type of person that will do whatever it takes to win.

“She has so much skill, but what sets her apart is that the stat sheet doesn’t matter to her. She does all of the dirty work and gets things done. She does the little things that not everyone else does. She’s one of the most unselfish players I have ever played with, and I admire that about her. The memories we have made through basketball I will cherish forever.”

“Any teammate that gets to play with her is so lucky,” said Orihel. “They are getting a team player that will do whatever she can to help her team win.”

Her coach since ninth grade, McDonald described Baxter as “the traditional ‘Wood’ kid. From a long line of Baxters to attend Wood, she is the hard-nosed, tough, scrappy, unselfish player who always puts the team first.

“Noelle is our leader of leaders — the captain of the captains — the one anyone on the team can feel comfortable to talk to about things, but also the one who puts the standards of the program above all. I hope her character has rubbed off on our underclassmen, because it will take them much further than any points or wins.”

Baxter lauded McDonald for “teaching us about commitment, teaching us things that have become life lessons.” She said that her penchant for unselfishness commenced with her mom, Carissa Bula.

“She always told me that you should treat others like you want to be treated,” said Baxter. “She helped me realize that if you work hard, everything is worth it, to focus on doing your job and doing your job well, and to embrace the moment.

“She’s the reason I am where I am today.”

McDonald said that Wood has been “lucky to have her the last four years.”

Noelle Baxter, the unselfish leader of leaders, says the feeling is quite mutual. 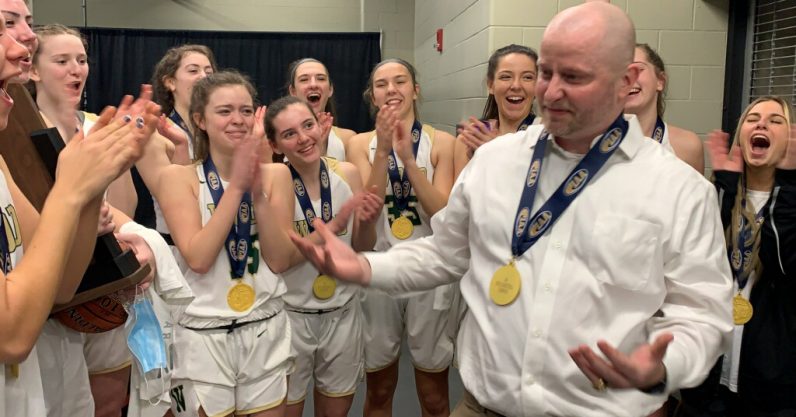