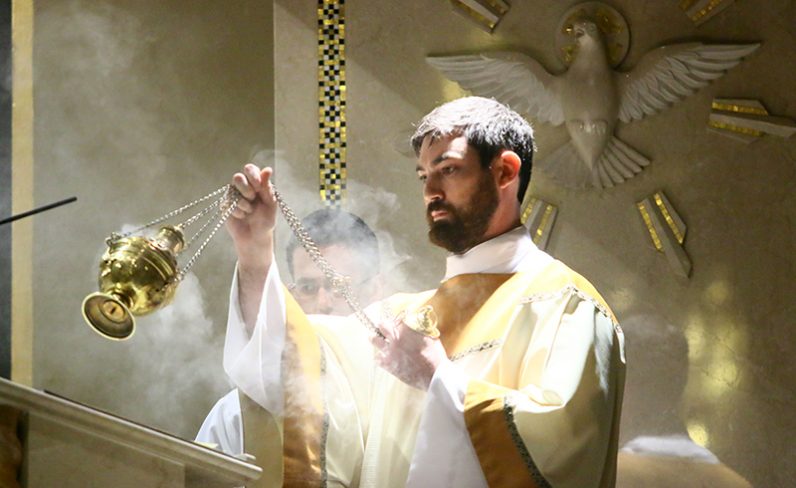 Deacon Mark Tobin, who will be ordained a priest of the Archdiocese of Philadelphia May 15, incenses the Book of Gospels before proclaiming the reading at the Cathedral Basilica of SS. Peter and Paul. (Photo by Sarah Webb)

All his life, Mark Tobin had a strong desire for a challenge. He sought adventure, which led to hardships and eventually, by grace, to an encounter with God and a calling to life as a Catholic priest.

Ahead of his ordination May 15 by Archbishop Nelson Perez as a priest for the Archdiocese of Philadelphia, Tobin, 34, reflected on perhaps the greatest challenge of a priest and any Catholic person today: taking up one’s cross every day and following Christ.

“In today’s world the faith is not a popular thing, at least not in the circles I’ve hung around in. It’s hard to be at once authentically living the faith and be missionary,” Tobin said in an interview with CatholicPhilly.com.

“To be oriented toward evangelizing others requires us in today’s world to be fools for Christ. That means suffering. I do think priests ought to be models of this but we’re all called by our Christian vocation to go out to the world. That means in every way, in new and creative ways, to help people see the always-relevant message of Jesus Christ.”

Indoors Tobin enjoyed playing drums in the school bands at Avon Grove High School, plus various rock groups among friends. It’s an avocation that he still enjoys today, along with a passion for doing difficult things like skiing, playing golf and brewing good beer.

The chase for thrills led him into trouble of the kind that many teenagers find themselves. But it also opened military service as an avenue for his adventurous spirit. While just 16, Tobin and his mother and older brother, who also was seeking military service, went to a Navy recruiting office, and Mark’s future course was set.

In the meantime, he continued going to Mass on Sundays but really only to appease his parents. He had begun to drift away from his Catholic faith.

“I definitely saw a good role model in my parents and they raised us with good values,” Tobin said. “But especially in my teenage years, I didn’t quite value (my faith).” 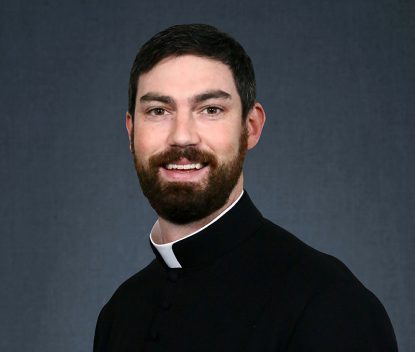 After high school graduation he entered basic training in the Navy, where superiors saw his promise and suggested he enroll in one of the special forces units such as the SEALs. When Tobin saw a photo of men rappelling out of a helicopter onto a gunboat, he was sold.

He trained as a SWCC (Special Warfare Combatant Crewman) in San Diego then reported with his unit in Mississippi serving on a 33-foot boat with five machine guns, intended for high-speed combat on rivers. That led to two six-month deployments in Iraq on the Tigris and Euphrates rivers, from 2006 to 2009, during that country’s most violent period.

“It definitely was a great adventure,” Tobin said. “I met great guys, with similar gung-ho personalities, from all over.”

During that time Tobin had completely stopped practicing the Catholic faith, and his was “not a deeply reflected life,” he said.

Faced with a choice to reenlist and make the Navy his career or accept the offer of college tuition money under the G.I. Bill, he chose the latter and entered West Chester University to begin studies toward a business marketing degree.

As he was transitioning to a classroom from a war zone in which he had not been reflective, the fire of faith began to spark in his heart. “I was beginning to search for the truth, for what I believe,” he said.

One year into college, he had “reached a low point,” Tobin said, realizing that “no one really knows me, deep down.”

It was then that he experienced what he called “a profound and graced moment where God made himself known to me in a way I was not even seeking.”

Even though Tobin considered himself an agnostic – not rejecting religion but more indifferent toward it as, he said, “probably a good chunk of guys do” – he understood that God is real.

“God had revealed himself to me in a way that made me thirsty for something more in my life (and) a quest in me to know God more,” he said. “That took its form in suffering and conversion and difficulties.”

Tobin had begun to know “not an indifferent God but a God who had known me in the midst of my brokenness,” he said. “I had a sense of mission with that. I had a sense that God was calling me to something.”

The encounter set Tobin on a course “back to the Catholic faith that I fell away from,” he said. “It made more sense to start there, the faith that my parents raised me with.”

He began participating in the university’s Catholic Newman Center activities, led a Bible study group and met new friends, including the chaplain at the time, Father John Nordeman. 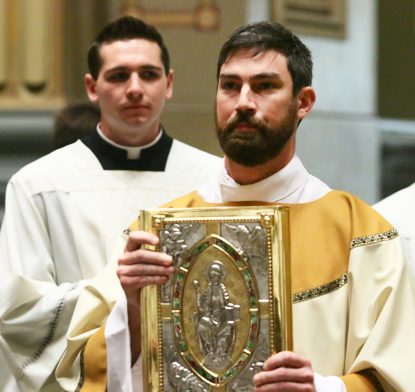 Eventually after graduation he entered the seminary in 2014.

Though he calls his seven years of seminary formation both a “challenge” and a “cross,” Tobin also met good priests and “good brother seminarians who have the same and different struggles. They’re all seeking the Lord’s will.”

Tobin hopes that as a priest he will be able to “draw people to the sacramental life as I’ve been drawn,” he said.

But he also strongly wants “to reach men and women who much like myself have strayed or become indifferent to the idea of God in their life, and to help them to see how life could be, the potential for their life, more than they could possibly grasp. Because God has a vision for all of us that far exceeds our own desires. That’s what stepping into the priesthood for me is like.”

For him, a priest is like Christ as “a man of suffering, knowing pain” (Isaiah 53:3). “It’s compelling to people when they see this type of suffering because every person suffers, it’s a matter of what we do with our suffering.

If in one’s sufferings “you look to the world to fulfill you, you are left even more empty. (In that case) your suffering doesn’t have value,” he said.

“It’s when you meet Christ in the midst of your suffering, that’s when you realize that God is not beyond anything. He’s not so quick to cast us off like we might do with other people.”

PREVIOUS: Family’s faith was bedrock on winding path to priesthood

NEXT: Two Neumann U grads commit to year of service