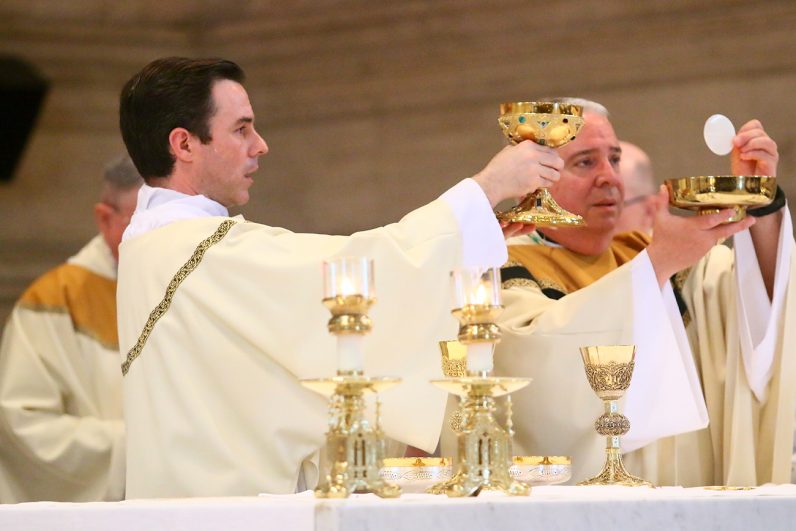 Deacon Kenneth L. Cavara, who will be ordained a priest for Philadelphia May 15, serves at the altar as Archbishop Nelson J. Perez consecrates the Eucharist at Mass. (Photo by Sarah Webb)

Rosary beads hanging from the gear shifter of his dad’s car remains a vivid memory for Ken Cavara, and a reminder of how prayer played a natural part in his large family in St. Agnes Parish, West Chester.

Even as young as 8 years old, he’d thought about someday being a Catholic priest. Though that early impulse was placed aside as Cavara grew, it never completely went away. Now at 40, he is just weeks away from being ordained a priest for the Archdiocese of Philadelphia May 15 at the Cathedral Basilica of SS. Peter and Paul.

He discussed in an interview with CatholicPhilly.com the many winding paths of his journey and its deep ties to prayer and family life – even after tragedy.

Growing up, he was a typical active young man who played sports including soccer and skiing, and participated in the Boy Scouts. With six siblings in the household, “there was always something going on,” he said.

Despite all their activities, “we prayed as a family. We would pray the rosary, we would attend Mass, made sure we got to confession.” It was, he added, “a domestic church.”

He was an altar server at St. Agnes, helped to cut the grass at the parish cemetery and after graduating from the parish school, he attended Salesianum School, the Catholic high school of the Oblates of St. Francis de Sales in Wilmington, Delaware.

His parents Kenneth and Noreen were models of strong faith and service – both were lectors at St. Agnes and served on the pre-Cana marriage preparation team – and their faith “came naturally, just to be a part of the parish. That was always understood,” he said.

When Ken was 16 and playing in an international soccer tournament in the Netherlands, he was called back home. That’s when he learned of the sudden death of his father. 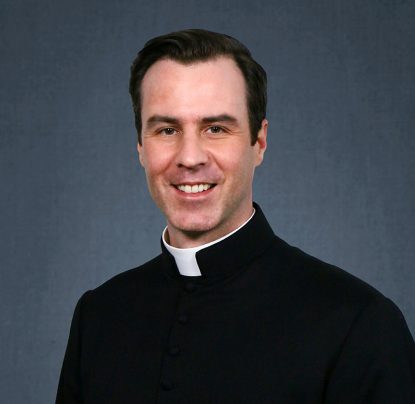 As his mother set about raising seven children, the youngest only age 6, he recalls her saying that “I knew the Lord would take care of us, as he always had.”

After high school Ken studied political science at nearby West Chester University, graduating in 2005, where he had “a typical college experience” that included the “struggles” that many young people experience in those years.

He was restless, and followed college with backpacking through Europe, teaching English as a Second Language in Taiwan and traveling through Southeast Asia from 2006 to 2008. But the faith that was instilled in him as a child “was something that always was there,” he said. “My vocation is definitely an example of the mercy of God, just his goodness in so many ways.”

In fact even though he had a girlfriend, many other friends and family members, Ken found himself completely alone on a beach in Thailand where he asked the crucial question of his life: “Lord, what do you want me to do?”

He then returned to the United States and got a job in medical sales based in Hattiesburg, Mississippi. It was there that he became involved in his Catholic parish, serving as a lector and catechist in the Parish Religious Education Program, and reading more about his Catholic faith through the works of G.K. Chesterton and several saints.

As a young man attending daily Mass and serving the parish, the natural question of his pastor was, “Have you ever thought of becoming a priest?”

“That was really significant,” Ken said. “You grow up around priests, but to actually know someone who is going to prepare for priesthood, it really brings it home.” 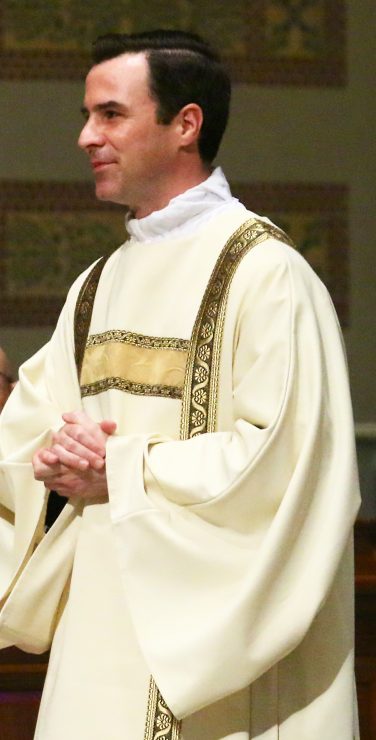 Deacon Kenneth Cavara at his ordination as a transitional deacon in 2020. (Sarah Webb)

Ken had started discerning a vocation with the Dominican order of priests, and now he faced a choice between becoming a religious or secular priest for the Philadelphia Archdiocese.

One summer with his family at the New Jersey shore, Mark invited a priest friend, Father Peter DiMaria, for dinner and he chatted with the family about life in general, and religious vocations in particular.

“He told Mark, ‘I think your brother has a vocation to the priesthood. Just tell him he can contact me,’” Ken said. “I was already thinking about it but didn’t know where to go (with it).”

Father DiMaria, ordained for the archdiocese in 1993, “was a great influence, a great example of goodness,” Ken said.

He also listed two former pastors at St. Agnes as major priestly models. One was then Father Edward Deliman, now an auxiliary bishop; and the other was Father Nelson Perez, the archbishop who will ordain him a priest.

Ken did eventually enter St. Charles Seminary in 2014, joining his brother until he was ordained in 2016.

Now just a week away from his departure from the seminary, Ken is glad to have its rigorous academic demands behind him after seven years in priestly formation.

Nevertheless he appreciates the opportunity he had “to take time to study theology and learn the liturgy of the church and hand that on to people when they need it — that’s what excites me,” he said.

After his weeklong retreat and the ordination May 15, followed by his first Mass at St. Agnes the next day, the new priest looks forward to “getting to know the life of a parish,” he said. “Being able to preach and celebrate the sacraments, that seems exciting to me. I enjoy interacting with people, getting involved in the sacred space of a wedding, a new birth, and when the family goes through difficulty, and being with them.”

Cavara knows that in today’s culture people face many distractions, and a priest in their community is a reminder of enduring faith.

“To be a witness, a reminder of the Lord who sustains us and who we’re going to behold face to face through his goodness and mercy and enjoy everlasting life; to be able to talk about that with people, sounds to me like a great life.” 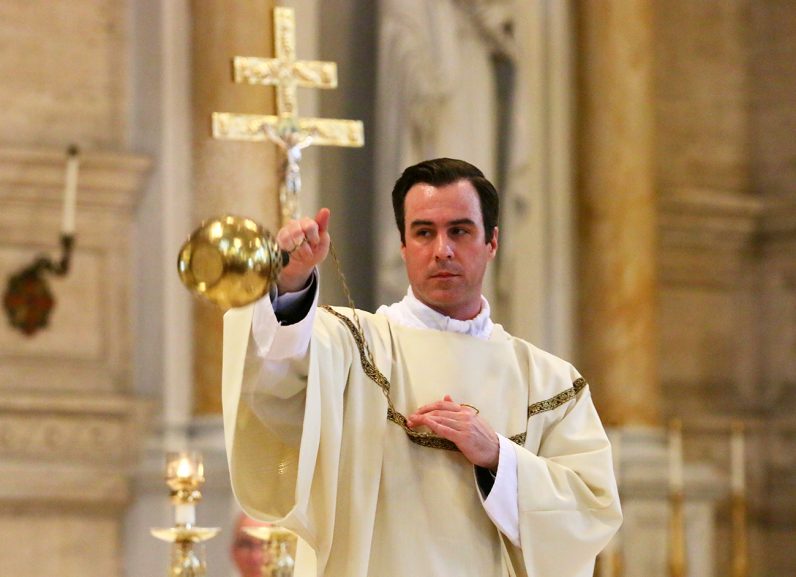 Deacon Kenneth L. Cavara incenses the altar in St. Martin’s Chapel at St. Charles Borromeo Seminary, from which he is graduating prior to his ordination as a priest for Philadelphia May 15. (Sarah Webb)

NEXT: New priest to bring spirit of adventure, model of suffering to ministry