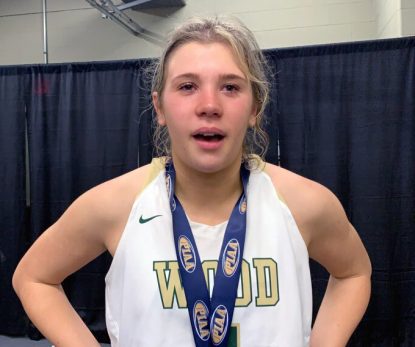 When it comes to high school basketball, no league dominates the state quite like the Philadelphia Catholic League.

That was never truer than this past season.

In the recently announced Pennsylvania Sports Writers’ All-State team, 23 PCL players – nine girls and 14 boys – adorned the prestigious list, with five of them named Player of the Year. In addition, three PLC mentors were recognized as Coach of the Year.

“It speaks volumes to the level of competition the PCL teams face every game, while the three all-state coaches speaks to the preparedness of those talented teams,” said Archbishop Wood coach Mike McDonald. “The top PCL teams are well-disciplined, unselfish, defend, and run really good offenses to support their players’ strengths. I am always impressed by our PCL opponents’ readiness.”

Joining McDonald as Coach of the Year were Cardinal O’Hara’s Chrissie Doogan and West Catholic’s Beulah Osueke. The trio guided their programs to state titles in Classes 4, 5 and 3, respectively.

Orihel is one of two PCL players in the league’s 77-year history to be named first-team All-Catholic four straight seasons.

“It really is a huge honor to be named player of the year,” said Orihel. “There are so many amazing players in the state, so to be recognized among them is really humbling. Even though this is an individual recognition, it wouldn’t have been possible without my team.

“I don’t know if there is another league in the state that matches the level of competition in the Philadelphia Catholic League, which is one of the reasons I chose to attend Archbishop Wood. I wanted to compete against the best girls and teams in the state every year. I feel so fortunate to have had the opportunity to play with and against so many amazing players and coaches. It’s great to see so many of the league’s players and coaches recognized.”

Joining Orihel on the Class 4A first team was Wood junior teammate Ryanne Allen. After scoring the winning points in the closing seconds of the PCL semifinal and then netted a game-high 22 points in the championship, Allen tallied a crucial 17 points in the state final.

In Class 5A, Cardinal O’Hara juniors Maggie Doogan and Sydni Scott were named to the first team. The 6-2 Doogan, a first-team PCL selectee, averaged 14.5 points, seven rebounds, and two blocks per game for the PCL runner-up champs. She starred in the 51-27 state championship victory blowout over Chartiers Valley, corralling 13 points, five blocks, and two steals.

“All of her hard work has been paying off,” said Doogan. “I’m very proud of her. She doesn’t care about points and statistics. She slept with the state trophy for like three days. Winning with her team was the only thing she cared about.”

Scott was named first-team PCL for a third straight year. Her 16 points helped carry the Lady Lions to a lopsided victory in the state championship win.

“The Catholic League is the best league there is,” said Scott, who was a Class 6A third-team selection last year. “That’s my personal opinion.” 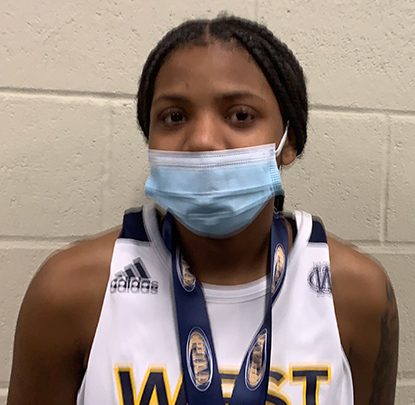 Also from West Catholic, senior Ciani Montgomery made third team, undoubtedly aided by her 34-point outburst in a 67-56 state final win over Mohawk. The 5-6 guard averaged 18 points and was a second-team All-Catholic.

“Destiney and Ciani both had tremendous growth on their paths,” said Osueke. “It’s been fun coaching them throughout the years because they’re both the total package. They have the leadership, personality, and talent that stars need, but above all, they’re selfless and they prioritized team success. They both have very bright futures ahead of them.”

Lansdale Catholic sophomore Gabby Casey was named to the Class 4A second team after notching averages of 19.8 points, 11.8 rebounds, 5.6 assists, 5.0 steals, and 1.7 blocks against a Red Division that was loaded top to bottom.

Neumann-Goretti guard Mihjae Hayes was named to the Class 3A third team after averaging 18 points, 5.7 rebounds, 3.4 assists, and 2.4 steals while being named to the PCL’s second team. 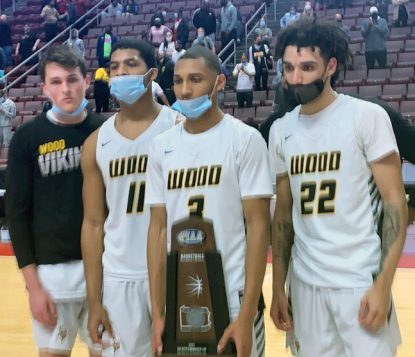 While leading Wood to the Class 6A state final, Diggins became his school’s all-time leading scorer with 1,513 points. After averaging 18.8 points and 8.3 rebounds for Class 5A Ryan, Lemon-Warren saw his season end in the state final. A combo guard, Miller averaged 18.4 points, 10 rebounds, 5.4 assists, and 2.9 steals.

“It was a special season,” said Diggins. “It’s definitely something that I’ll never forget.”

Not a chance. Diggins was one of four Wood players who were named first-team All-Catholic en route to a Catholic League championship. All four reached 1,000 career points and were named all-state, with senior Marcus Randolph making first team while senior Daeshon Shepherd and Jaylen Stinson both made second team.

“It’s just a blessing to play with talented people who want to achieve the same goals, and in the process of doing so, reaching the same individual goals,” said Stinson. “It’s great to know that after our years together, we left a mark that will be remembered for a ling time.”

In Class 5A, Bonner-Prendergast senior Malik Edwards was named first team and Archbishop Ryan senior Christian Tomasco was named to the second team.

In Class 4A, Archbishop Carroll senior Anquan Hill was named to the first team while freshman teammate Moses Hipps made second team. In Class 3A, Bishop McDevitt junior Justin Moore and Devon Prep junior IV Pettit both made second team.

PREVIOUS: Happy to be playing lacrosse at all, Devon Prep ecstatic with 18-3 win