The Devon Prep Tide avenged their 2019 District 12 loss to Cardinal O'Hara, the last time the two teams met, with a lopsided 18-3 win April 7 over the Lions. (Photo by Dan McCarty)

Philadelphia Catholic League (PCL) lacrosse is well underway for the 2021 spring season. The uncertainties of COVID-19 plus the health and safety protocols in place mean teams are taking life one day at a time and making the best of the situation both on and off of the field.

Teams are building confidence and positivity from simply being able to come out and play despite the differences from a typical season that must be dealt with. Players report they’re happy to have their season after the cancellation of all of last year’s schedule.

The Cardinal O’Hara Lions hosted the Devon Prep Tide Wednesday, April 7 on what turned out to be an impressive offensive outburst for the latter as it ultimately dominated O’Hara, 18-3.

O’Hara remains the defending District 12 champion as it achieved that title in 2019. The Tide dropped a tough decision to the Lions that year and so this was an opportunity for a belated payback.

“We knew that O’Hara had a very successful season two years ago,” said head coach Mark Consolo. “They beat us pretty good that year.”

Strong defense and goalkeeping by Devon Prep, plus some successful faceoffs, made the victory possible. More important than the outcome, however, was just being able to compete and having fun doing so.

“It feels great,” said Devon Prep senior Joseph Koroly. “We weren’t sure if we were going to have a season.”

Being back on the field is especially fortunate for the seniors as they did not know if they would have the chance to play during their final year of high school.

“For me to be a senior, personally, it feels like a blessing just to be out here with the boys doing what we do,” said O’Hara senior goalkeeper Christian Donato. 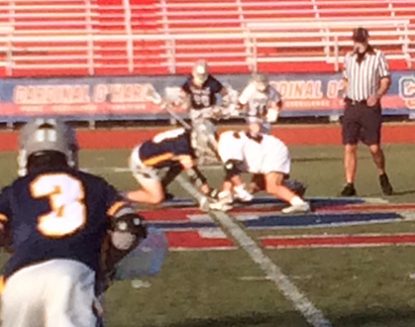 The game began with a scoring flurry as O’Hara senior Brett Shoman found the net 17 seconds into the action, while 49 seconds later Devon Prep junior Dan Brown tied the game.

Just 50 seconds after that, junior Tyler Kenneson gave the Tide a permanent advantage.

Brown — who would have a busy day ahead, tallying seven goals for the game — Kenneson and senior Nadir Bryant kept their guard up and Devon Prep held a 6-1 lead after the first quarter.

Freshman Nick D’Alessandro and Koroly contributed during the second quarter, paving the way for a halftime score of 12-2. Freshman Dillon Dibattista added a goal for O’Hara.

Sophomore Xavier Tran registered an O’Hara goal early in the new half but the Tide kept its composure to secure the win.

“Our coaching staff was very pleased with how the team played together all four quarters,” said Consolo. “I think our goalie, defense and faceoff play contributed to our offense having so many opportunities. They cashed in on them.”

Donato battled bravely for the Lions’ defense in this crucial match.

Moving on, O’Hara has a lot to look forward to such as enjoying the year together, winning as much as possible, growing as a team every day and getting better overall.

“Our goal is to get back to the District 12 championship and I think we’re going to reach it,” said Donato.

Devon’s main goals for this season are to do its best and have fun as a team.

“We look forward to finishing this season off strong and just being happy with everyone’s performance,” said Koroly.