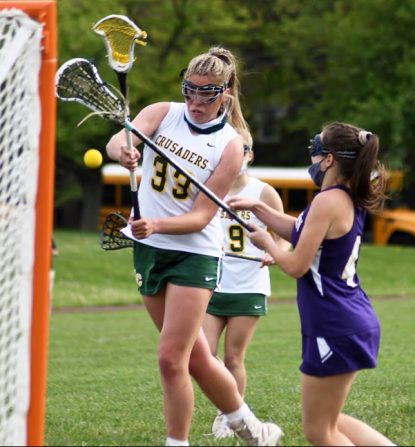 Lansdale Catholic junior Grace Picozzi, who scored her 100th career goal in lacrosse May 11, scores in a game earlier this season against Perkiomen School. (Photo by Dan McCarty)

Lansdale Catholic High School’s 100-point club has added another member. Junior Grace Picozzi of the Crusaders’ lacrosse team secured the 100th goal of her three-year career during a 21-8 rout of rival Archbishop Wood May 11.

Reaching triple digits in career scoring came as a shock to Picozzi. She was not thinking about it at all entering her junior year and simply didn’t see the milestone coming.

“Coming towards the end of the season, it was really exciting,” said Picozzi. “It made the year really special.”

The contest against Archbishop Wood turned out to be quite the day for Picozzi as she registered a game-high nine goals. Late in the first half, she thought the big moment was in the works but the ball did not make it into the net. Nevertheless, the Vikings turned the ball over and LC teammate Sam Beyerle assisted Picozzi who then saw her shining moment with 55 seconds to play in the half as the Crusaders took a 16-7 advantage.

“At the end of the quarter, it was important to keep the ball in our possession,” said Picozzi. “It was a little difficult cracking down on time.”

The game was far from over. Picozzi tallied two more goals before the clock expired.

“The team played amazing against a team like Wood,” said Picozzi. “Coming in with energy, made it better.”

Lansdale Catholic posted an 8-2 record in the Philadelphia Catholic League, good for a third-place finish in the league in the regular season. The Crusaders would advance to the playoffs and drop a semifinal decision to Cardinal O’Hara, 22-5, May 19.

In addition to helping her team, Picozzi keeps her family’s legacy going in Lansdale Catholic sports as the seventh of nine siblings. Her brothers, Vince and Nick, were among the school’s football stars. They went on to Temple University and will be moving on to Colorado State.

Her sister, Mary, was an asset to the Crusaders’ softball team and continues on in her sport at West Chester University.

“It feels good,” she said. “My family is always competitive.”

Lacrosse ended up as the sport where Grace found her skills. She took an interest in the game when she was in second grade with the help of her best friend’s mother who coached her at the time. She is the first member of her family to take up this particular sport.

Picozzi’s athletic ability is not limited to lacrosse. She plays volleyball and has been a member of the swim team in each of her years at Lansdale Catholic. When not on the field, she can be found on the court or in the pool.

Where will her future take her? Although uncommitted right now, she knows she wants to take her lacrosse career to the collegiate level. Academically, she would like to major in engineering or possibly another field in STEM (science, technology, engineering and math). 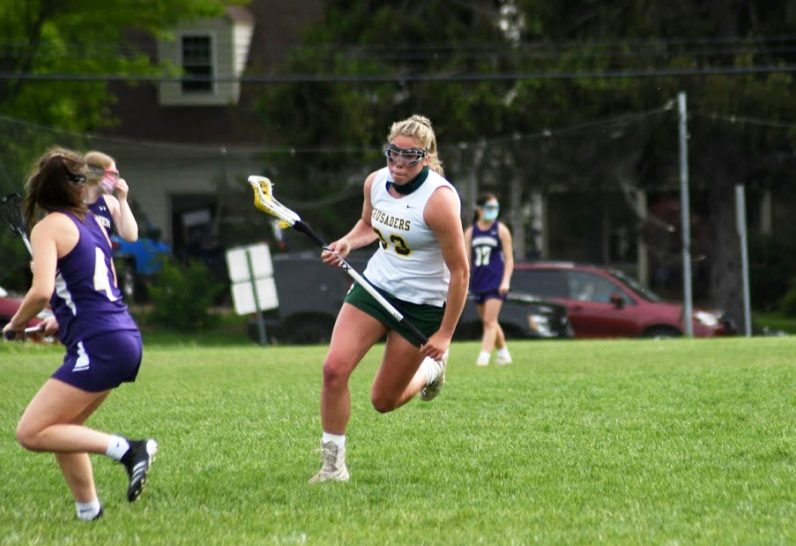 Lansdale Catholic junior Grace Picozzi, who scored her 1,000th career point in lacrosse May 11, scores in a game earlier this season against Perkiomen School. (Photo by Dan McCarty)