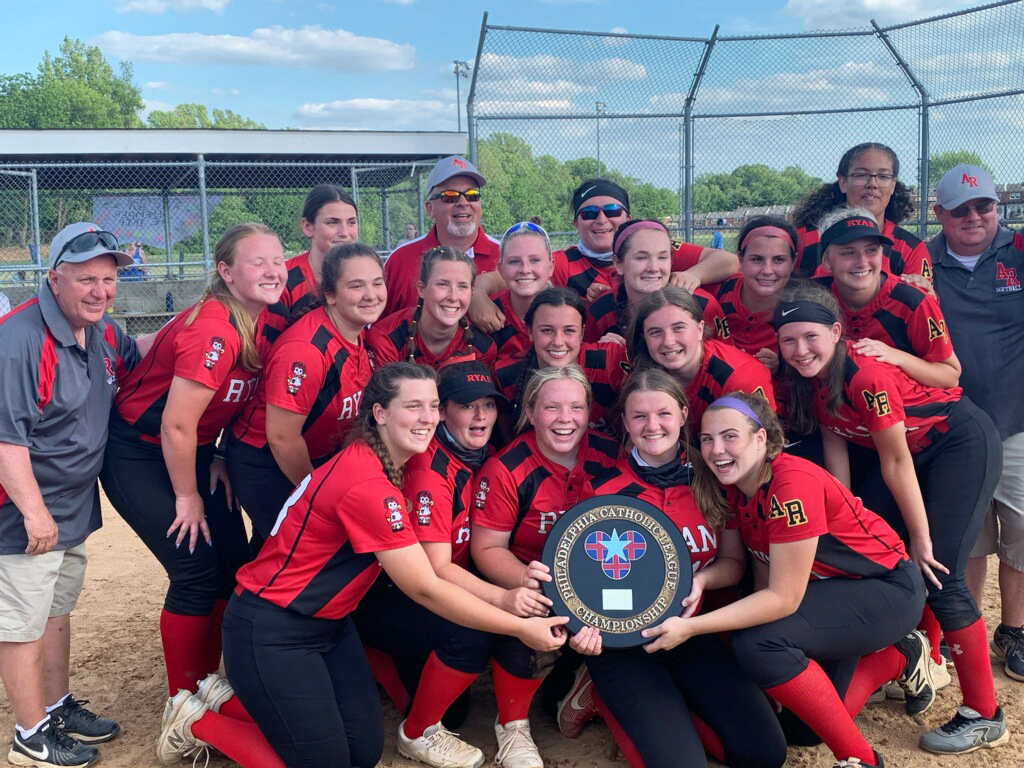 The Archbishop Ryan Ragdolls rally proudly around the Philadelphia Catholic League plaque, which they captured May 22 with a 10-6 win over Conwell Egan. (Photo by John Knebels)

About two hours later, that seemed like ancient history.

With nine different hitters collecting hits, six crossing the plate and seven knocking in runs as part of a 20-hit deluge, the Ragdolls defeated visiting Conwell-Egan, 10-6, in the Philadelphia Catholic League softball championship Saturday afternoon, May 22 in front of an animated crowd represented by both communities.

It was Ryan’s first title since 2018 and second in three seasons. Last spring was cancelled because of the global pandemic.

“We knew it was going to be a tough game,” said Ryan coach John Kidwell. “They jumped right on us, but we knew we had seven at bats, and I was confident in our hitters that they were going to do their job. They just attacked the ball. They had great at bats today.”

The top-seed Ragdolls finished a perfect 9-0 in the regular season. They defeated eight-seed Little Flower and five-seed Archbishop Wood in the semifinals.

Competing with Conwell-Egan would be their toughest challenge. After an 0-2 start, the Lady Eagles entered the game as the three-seed after winning six of their final seven games, then beating six-seed Bonner-Prendergast and two-seed Archbishop Carroll in the playoffs.

Sure enough, C-E seized an immediate 3-0 lead three batters into the game when sophomore standout Katey Brennan (2 for 2, two walks, two runs scored, three RBI) slammed a three-run homer over the left-center field fence. Ryan freshman pitcher Emma McDermott responded by striking out the side, but the Ragdolls were in a jam.

“It was early in the game,” said Ryan sophomore Janine Swift. “Emma settled in. She did her job. She did what she had to. Our defense always has her back, and we responded with the bats just like we do in every other game.”

Aided by a terrific play on a bunt by Swift at third, a great scoop and throw up the middle by senior shortstop Dana Bell, and one of the best catches ever witnessed when Ryan senior Dana Moser crashed through the fence in dead center field to steal a two-run homer from Conwell-Egan junior Angelina Bresnen, McDermott maintained her pitching momentum over the next five innings, allowing three hits and two walks, one of them intentional.

Meanwhile, the Ragdoll bats came alive … and them some.

In their half of the second inning, 11 Ragdolls came to the plate. The hit barrage included eight singles, and heading into the third inning, the Ragdolls led, 6-3. In the fourth, a two-run single by Swift (2 for 3, two RBI, run scored) plated senior Lauren Hagy (3-for-5, three runs scored) and freshman Kayla Gray (3 for 4, two runs scored, RBI), and an RBI single by senior Reilly Mehaffey (3-for-5, two RBI, run scored) extended Ryan’s lead to 9-3. Freshman pinch hitter Eliana Szatkowski followed suit with a run-scoring single in the fifth, and heading into the seventh, Ryan was cruising at 10-3.

Conwell-Egan had one more chance.

“When we’re down, we never give up, especially at the end of games,” said Brennan. “It’s the greatest thing ever because we stayed up for the whole entire game even though we were down most of the game, and it was just amazing. “

The Lady Eagles managed a three-spot in the seventh, with Bresnen (two runs scored), sophomore Ahlana Sesar (2 for 4, two runs scored, RBI), and Brennan scoring runs. Ryan freshman lefty Lauren Bretzel extinguished the rally with a one-inning, no hit, no run save, with the final out via a strikeout into the glove of senior catcher Deanna Moser.

After a spirited celebration, each of Ryan’s six seniors – McKenna Kerr, Hagy, Bell, Mehaffey, and Moser twin sisters Dana and Deanna – opined that they had what it took to win last year’s title if the season had not been cancelled, but bookending their scholastic career with championships was more than sufficient.

For Bell, the experience was one of contrast. In 2018, she was among the PCL’s best pitchers in leading the Ragdolls to the title. This year, Bell switched to shortstop and was among the league’s most feared hitters.

“It feels like just yesterday that I was holding up that plaque freshman year,” said Bell, who was named by league coaches as the PCL’s MVP. “It’s definitely a difference winning that game in the circle and then coming in at shortstop.

“As a pitcher, you kind of control the flow of the game. At shortstop, you’re at the mercy of the batters. It was great to experience it from two different points of view.”

When it comes to winning Catholic League championships, every angle is heavenly. 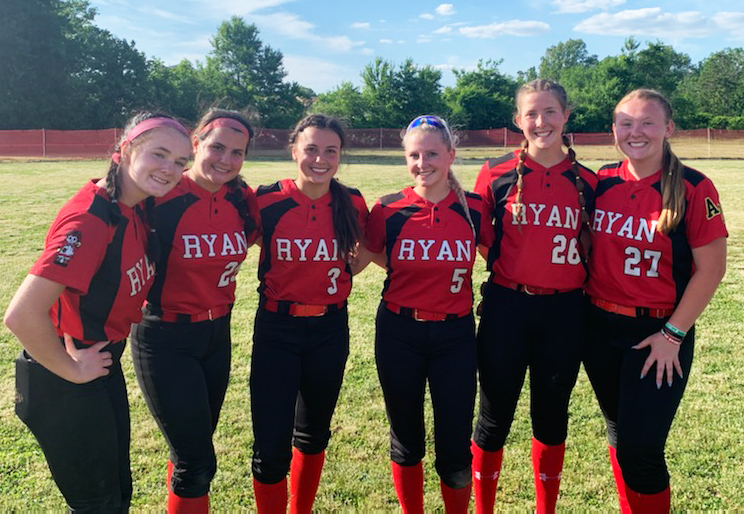 NEXT: La Salle ekes out win in extra innings for PCL championship