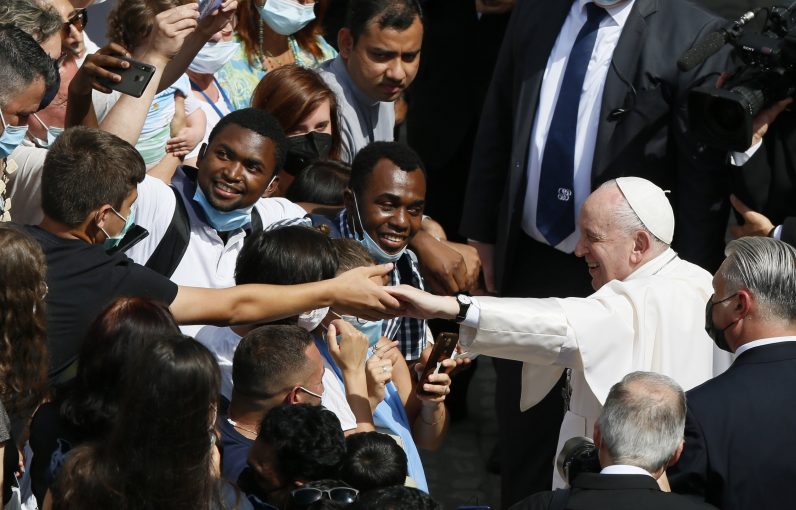 Pope Francis greets people during his general audience in the San Damaso Courtyard of the Apostolic Palace at the Vatican June 16, 2021. (CNS photo/Paul Haring)

VATICAN CITY (CNS) — Jesus is always praying for each and every person, desiring that his word would help people in their lives and that they never would feel alone, Pope Francis said.

“Jesus prays for me — each one of us can keep this in our heart. Do not forget it, even during those terrible moments,” the pope said June 16 during his weekly general audience.

With the grace of being able to pray to God and knowing we have been “prayed for,” the pope said, “we have only to have courage and hope” to be able to journey on in life and give glory to God.

The audience was held in the San Damaso Courtyard of the Apostolic Palace, where the pope first walked along the barricades, greeting people, shaking hands, signing books and giving his blessing. While attendees were obliged to wear masks, many had them down or pulled them down during their moment with the pope.

In his main audience talk, the pope concluded his series on prayer, which he began May 6, 2020, offering a total of 38 reflections on the theme.

“Prayer is one of the most evident features of the life of Jesus,” the pope said. “He prayed and prayed a lot,” immersing himself in it “because dialogue with the Father was the incandescent core of all his existence.”

At the Last Supper, Jesus intercedes for his disciples and for all those who will believe in him through their word and, even during the darkest hours of suffering on the cross, Jesus continues to pray, showing he is “the absolute intercessor: he prays for others, for everyone, even for those who have condemned him,” he said.

“Even in the most painful of our sufferings, we are never alone. Jesus’ prayer is with us,” he said.

On the cross he offers his love, “that is, he brings about our salvation,” Pope Francis said.

Jesus “was not a philanthropist who took care of human suffering and illness — he was that, but was more than that,” he said. In him there is not only goodness, there is “total salvation, messianic salvation, that gives hope in the definitive victory of life over death.” 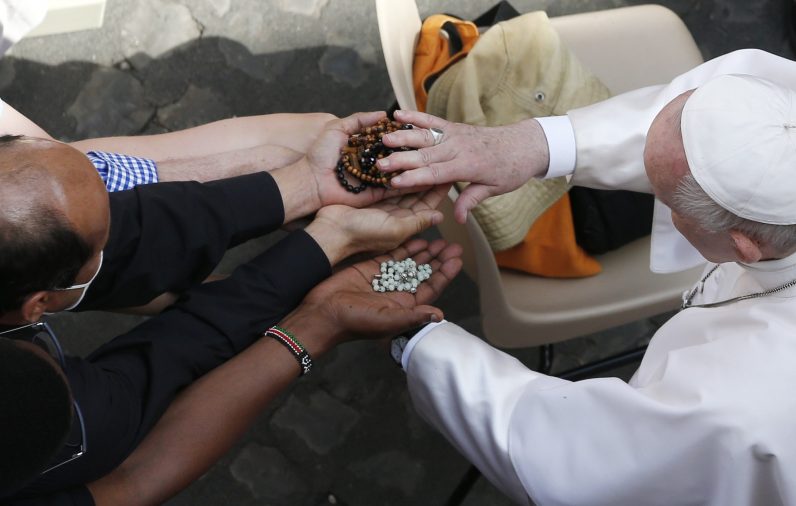 Pope Francis blesses rosaries during his general audience in the San Damaso Courtyard of the Apostolic Palace at the Vatican June 16, 2021. (CNS photo/Paul Haring)

NEXT: Loving our enemies: mission impossible, but not for God