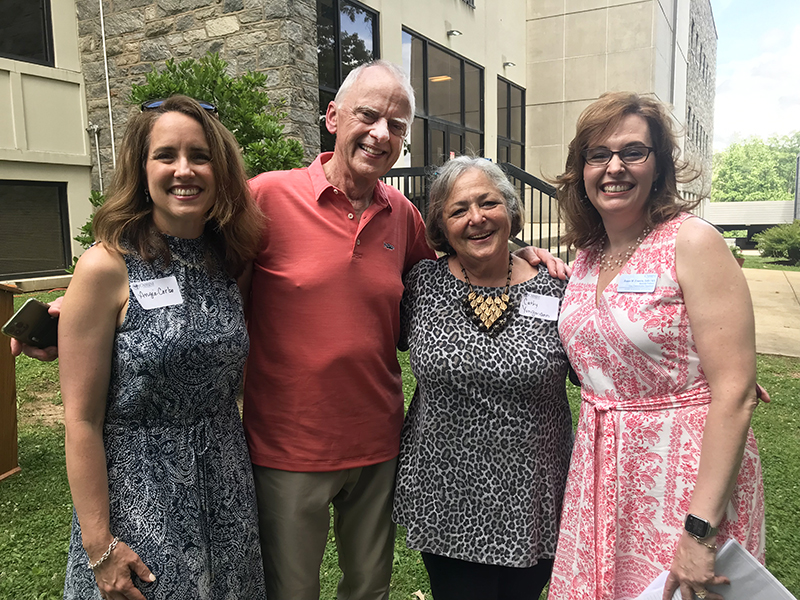 Jerry Zurek (second from left) encouraged his colleagues (from left) Angie Corbo, Cathy Yungmann and Dawn Francis during a gathering June 26 at Cabrini University to honor him upon his retirement as professor and chair of the English and Communication Department.

For the last 50 years Jerry Zurek, professor and chair of English and Communication at Cabrini University in Radnor, had looked forward to coming to work and inspiring decades of students.

So it was fitting that more than 120 of his former students, colleagues and friends attended a picnic on Saturday, June 26 on the front lawn of Cabrini’s Founder’s Hall to wish Zurek well in his retirement.

Francis told attendees of the gathering how Zurek mentored and encouraged her when she was a Cabrini undergraduate student beginning when she first arrived at Cabrini in fall 1989. “You taught me to use my voice to have an impact on the world,” Francis said to Zurek from the podium.

Ryan Chybinski is a current Cabrini student and sports editor for The Loquitur, the student-produced college newspaper founded in 1959 and winner of the Associated Collegiate Press Pacemaker award, considered the highest honor in collegiate journalism. (“Loquitur” is Latin for “he/she speaks.”)

Chybinski, whose mother and grandmother are alumnae of Cabrini, called Zurek “an amazing teacher. He brings great energy. He’s the main reason I came to Cabrini. He’s helped me to improve my writing. I can see a progression with his mentorship and help.”

Chybinski is also a student assistant at 6abc Action News WPVI-TV in Philadelphia, and plays on Cabrini’s men’s lacrosse team. 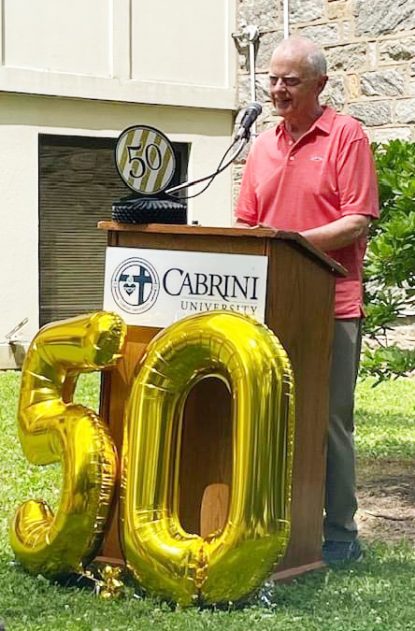 Jerry Zurek addresses an audience of his former students, colleagues and friends on the front lawn of Cabrini’s Founder’s Hall during a celebration of his 50-year career as a teacher at the university, from which he is retiring.

Mary “Detsy” McDevitt, who graduated from then-Cabrini College in 1981, had served as the Loquitur’s editor in chief. “He mentored me,” McDevitt said about Zurek. “He nurtured my growth and development; he helped me to be a better person.”

Concetta McMonagle, another 1981 Cabrini graduate, agreed. McMonagle is a former Loquitur reporter, and said Zurek provided her with valuable feedback when she was a student. “He said I’d be good in sales and marketing, and that’s where I worked for many years.”

Many former students spoke of Zurek’s passion for technology. In 1984, the Loquitur staff relinquished use of their typewriters and learned to use a couple of IBM personal computers to do the typesetting work previously done by a local printing company.

At the time, Zurek said in a 1984 Loquitur interview, “The changes were initiated so that journalism students could get experience writing and editing on the computer terminals. These methods are used by professional newspapers.”

By the early 1990’s, the Loquitur staff started using desktop publishing software to design the newspaper layout, replacing the manual “paste-up” style of page design and layout, and a few years later, Zurek’s journalism students learned to use PalmPilot devices.

The online version of the Loquitur launched in the early 2000s, and today the newspaper has more than 4,500 online readers and 1,500 print readers each week.

In recent years, Zurek scanned and digitized all issues of the Loquitur since its 1959 founding, and they are available for viewing on the Internet.

Former students attest to Zurek’s love of Apple technology products. Zurek has been said to stand in long lines outside Apple stores on the launch days of new devices.

Angie Corbo, who graduated from Cabrini in 1990 and is now chair of Communication Studies at Widener University, said Zurek had “a never-ending drive to make our education cutting edge.”

She spoke of how Zurek continually investigated new media technologies and introduced them into his classroom to give students an “industry standard education.”

As Zurek enters retirement, Corbo said she hopes he continues to share his “gifts with Cabrini and the world.”

“You knew within seconds of meeting him that this guy was different,” said Mike Kazanjian, who graduated from Cabrini in 2003. He has a career in financial marketing and is a member of Cabrini’s Board of Trustees.

Kazanjian described Zurek as “an innovator, a disruptor” in terms of integrating technology into the classroom, but also “a friend and a mentor.”

Zurek’s feedback could be “a blunt instrument, swung with grace,” but that these were “reminders of what you are capable of,” Kazanjian said. He added that Zurek “gave me the confidence I lacked” and that Zurek “has a gift for unlocking the potential of every student.”

Zurek and his colleagues built English and Communications into Cabrini’s most popular major.  Education had previously been the popular Cabrini major for many years. The Hamilton Family Foundation Communication Center in Founder’s Hall houses the Loquitur’s newsroom, video production and graphic design studios, and the 89.1 WYBF-FM radio station.

Zurek additionally started over 10 years ago Cabrini’s “Working for Justice in Guatemala” course, which features a mission trip for students to San Lucas Tolimán, Guatemala. Weeks after the students’ return, they travel to Washington, D.C. to lobby their congressional representatives on topics such as migration, poverty, hunger and climate change.

Jillian Smith, a 2009 Cabrini graduate and manager of student media operations at Cabrini, said her “most memorable moment with Jerry is going to Guatemala,” adding, “you know this man really cared for you and your education.”

Cathy Yungmann, associate professor of Communication, has worked alongside Zurek at Cabrini since 1986. Noting that Zurek “has worked to advance the careers of his students and colleagues,” Yungmann told the audience that “his favorite author is Shakespeare, and his favorite student is all of you.”

An emotional Zurek said to the audience, “Many of you were first generation college students, and I’m amazed to see all that you’ve done with your lives.”

Zurek’s wife, Suzanne Toton, a retired Villanova University professor, said they plan to do more travel during retirement. Greece and California are on the agenda.

Cabrini University has created a new scholarship in Zurek’s honor. The “Dr. Jerry Zurek ‘Communicator for the Common Good’ Scholarship” will be awarded to students enrolled in the Communication program who use their voices to facilitate active and engaged citizenship in service of the common good. 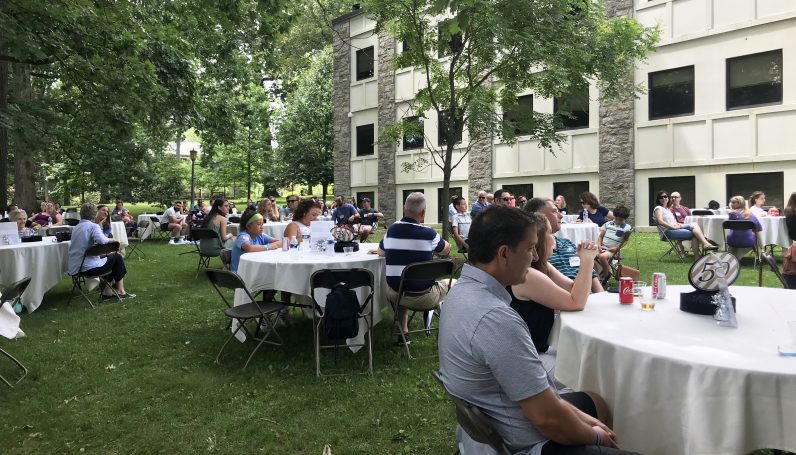 More than 120 former students, colleagues and friends gathered at Cabrini University June 26 to honor professor Jerry Zurek, chair of the university’s English and Communication Department, upon his retirement.