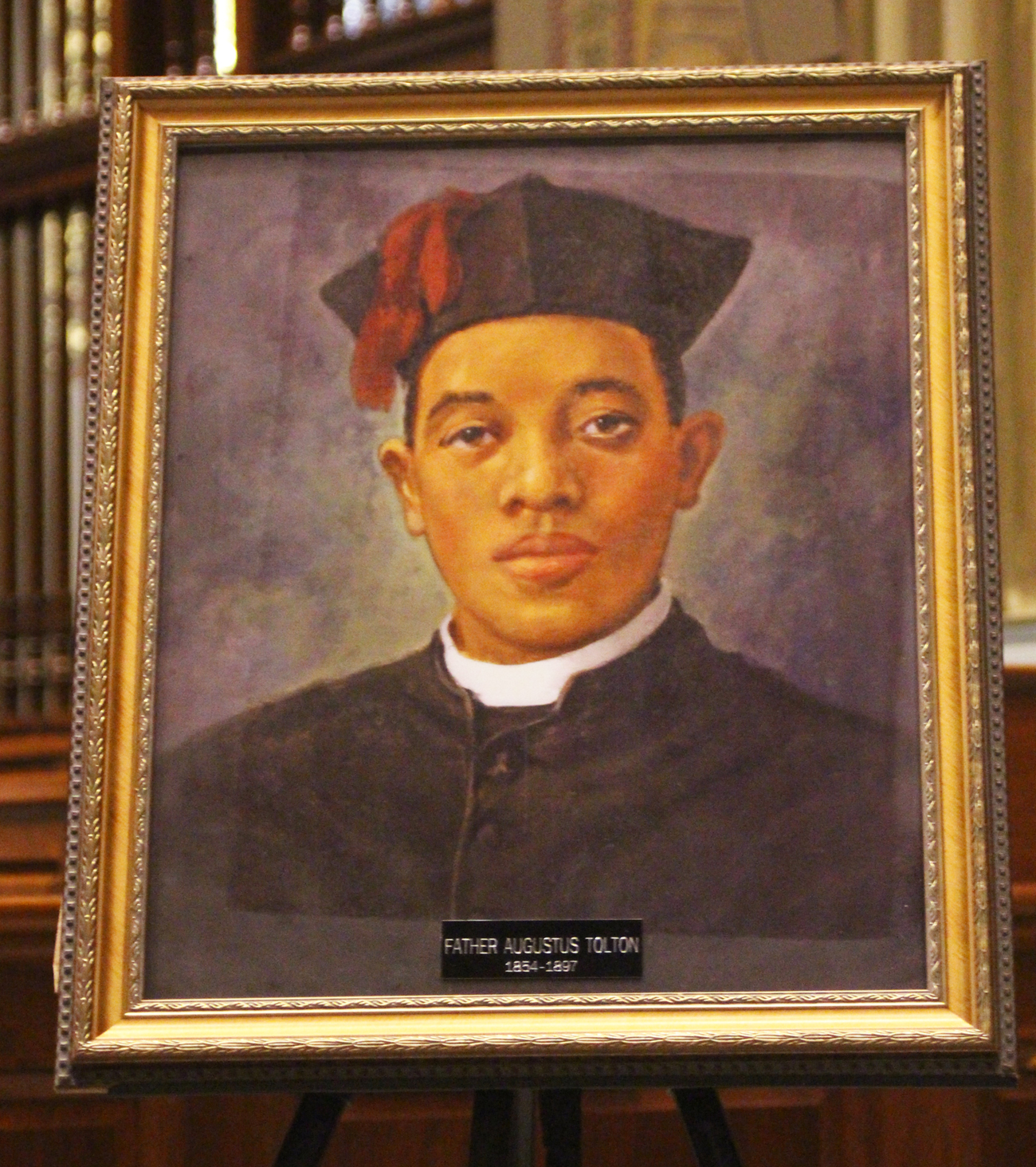 A portrait of Venerable Augustus Tolton, the first recognized African-American priest, is displayed during a June 26 Mass in his honor at the Cathedral Basilica of SS. Peter and Paul. In his homily, celebrant Archbishop Nelson Pérez said Tolton modeled a Christ-like response to racial injustice through his courage, perseverance and charity. (Gina Christian)

Some 175 faithful gathered last Saturday to honor a pioneering African-American priest now on the path to sainthood, whose heroic virtues are a model for modern times.

Archbishop Nelson Pérez was the principal celebrant and homilist at a June 26 Mass in honor of Venerable Augustus Tolton, the first widely recognized Black Roman Catholic priest in the United States. The liturgy, which took place at the Cathedral Basilica of SS. Peter and Paul, was sponsored by the archdiocesan Office for Black Catholics and the Philadelphia Tolton Ambassadors, part of a national network dedicated to advancing the priest’s canonization cause.

(View a photo gallery of scenes from the June 26 Mass in honor of Venerable Augustus Tolton.)

Music for the Mass was provided by the Philadelphia Catholic Gospel Mass Choir, a multi-parish ensemble under the direction of composer Tonya Taylor Dorsey. Knights and Ladies of Peter Claver, dressed in order attire, were also in attendance, with the knights providing an honor guard for the archbishop and his concelebrants.

Father Tolton’s extraordinary life – during which he countered relentless racism with Christ-like virtue – affirms that “God will do what God will do,” said the archbishop in his homily.

Born into slavery April 1, 1854, Augustus Tolton was raised as a Catholic, the faith held by the Missouri-based families who had purchased his parents. In 1862, his father escaped to serve the Union Army during the Civil War, but soon died of illness. Tolton’s mother thereafter fled with young Augustus and his two siblings, rowing them across the Mississippi River and eventually reaching Quincy, Illinois, where they settled.

After working in a factory and attending Catholic schools (often facing harassment in the process), Tolton moved to Rome in 1880 to enter the seminary, since “no seminary in the United States would accept him, probably including our own,” said Archbishop Pérez in his homily.

Upon his 1886 ordination, Tolton expected to be assigned to pastoral work in Africa, but was instead sent back to the United States, first to Quincy and then later Chicago. Despite repeated rejection, he “persevered because what was in his heart was love,” said the archbishop.

Such divinely inspired charity enabled Father Tolton to “love even when (he was) not loved,” exemplifying the forgiveness Christ extended even to those who crucified him, he said.

Father Tolton founded St. Monica Parish on Chicago’s South Side, and his reverence, humility, pastoral zeal and exceptional singing voice drew both Black and white Catholics from all economic classes.

Mother (now Saint) Katharine Drexel provided financial support for the establishment of St. Monica, and in his post-Communion remarks, concelebrant and Cathedral rector Father Dennis Gill announced a portrait of Father Tolton would be installed near Drexel’s tomb in the Cathedral nave.

Father Tolton’s poverty, combined with his strenuous schedule, likely hastened his untimely death from heat stroke and uremia in 1897. 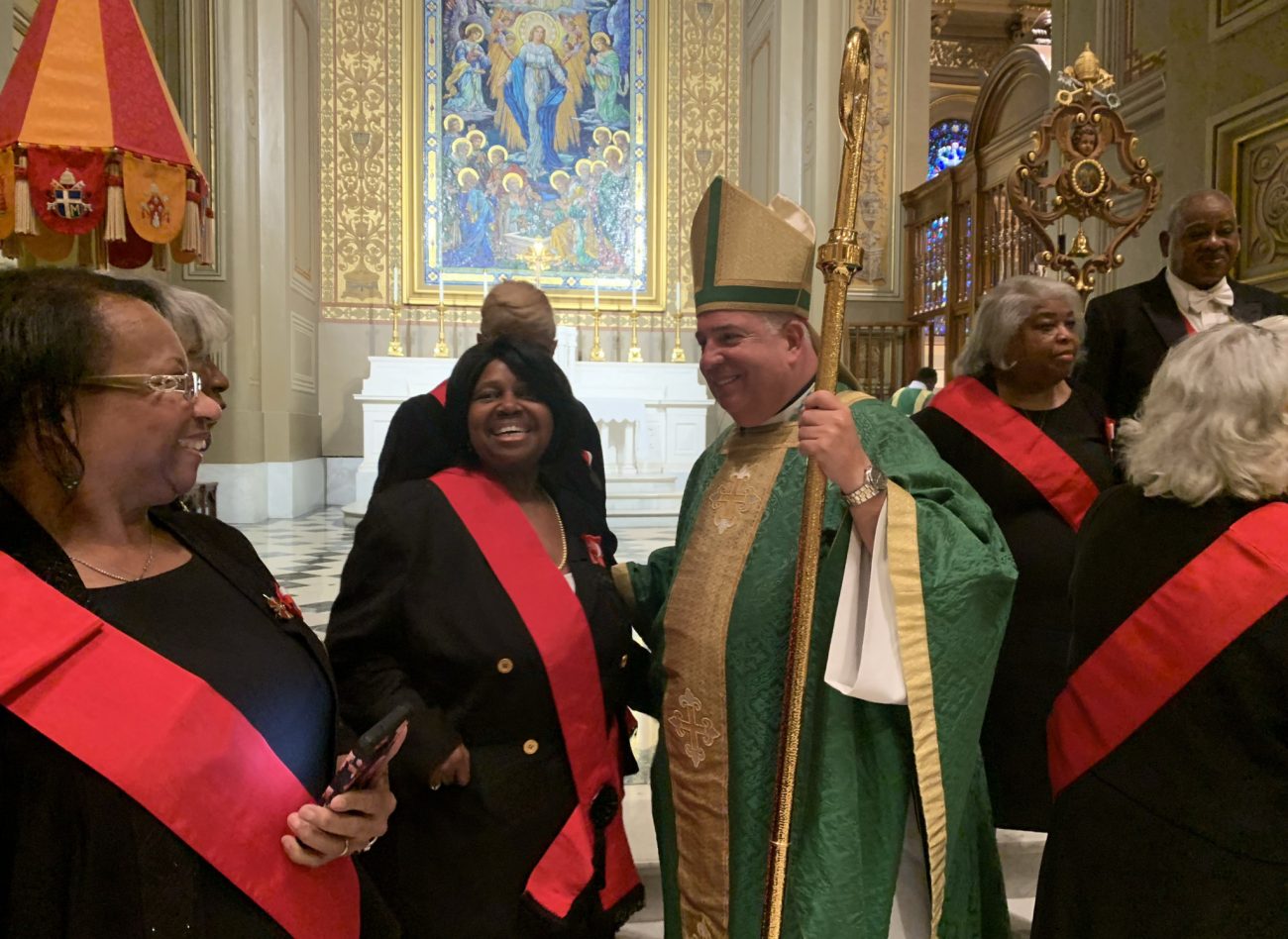 Archbishop Nelson Pérez speaks with several Tolton Ambassadors, who advocate for the canonization of Venerable Augustus Tolton, after a June 26 Mass at the Cathedral Basilica of SS. Peter and Paul celebrating the legacy of the priest, the first recognized African-American to be ordained. (Gina Christian)

“This man … literally died of exhaustion in giving himself to people, probably some of the very people that rejected him,” Archbishop Pérez said.

Under the leadership of Chicago Auxiliary Bishop Joseph Perry, the diocesan postulator for Tolton’s cause, Tolton Ambassadors are working diligently to raise awareness of their patron’s legacy. Currently, the Philadelphia Archdiocese’s ambassadors hail from a number of the city’s parishes, including St. Athanasius, St. Barbara, St. Ignatius of Loyola, Our Lady of Hope and St. Charles Borromeo.

The chapter’s presiding governor Eugene Frasier, a St. Athanasius parishioner, said in his remarks at the Mass that Tolton’s soul “was anchored in the Lord,” enabling him to “endure the systematic indignities and rejection that he faced as he began his journey to become a priest.”

Amid such suffering, Tolton committed himself to the Lord, said Father Gill, citing the priest’s own words: “As I look back on my life, I realize that every time I thought I was being rejected from something good, I was actually being redirected to something better.”

With his courage and confidence in God, Father Tolton “speaks to the church today,” said Tolton Ambassador Cynthia Brown.

“He tells us to persevere, to keep our eyes on the prize,” she said, adding that prayers to end racism and other forms of discrimination – which “have a long history in the Catholic and all other churches” – will be answered “in God’s time.”

Part of that answer was taking shape while the Mass in honor of Tolton was being celebrated, said Archbishop Pérez, noting members of the archdiocesan Commission on Racial Healing were participating that morning in a retreat at St. Charles Borromeo Seminary in Wynnewood. Immediately after the Mass, the archbishop delivered a talk to the group.

The work of dismantling racism must be founded in prayer, said Tolton Ambassador Madeline Tymes, who along with her husband (and Knight of St. Peter Claver) Ernest have been longtime supporters of the priest’s cause.

Tolton “serves as an inspirational model for all Christians on how to handle persecution and hardship on life’s path,” she said.

Yes, said Archbishop Pérez, especially since “the way Tolton internalized and processed hurt, rejection and injustice” shows “a way that we can do so ourselves.”

“Rather than shrink his heart,” such intolerance “made it bigger,” said the archbishop, who is confident that Tolton’s path to sainthood is a sure one.

“There will be a day … that this Cathedral will be filled, celebrating the canonization of Tolton,” he said. “Because God will do what God will do.” 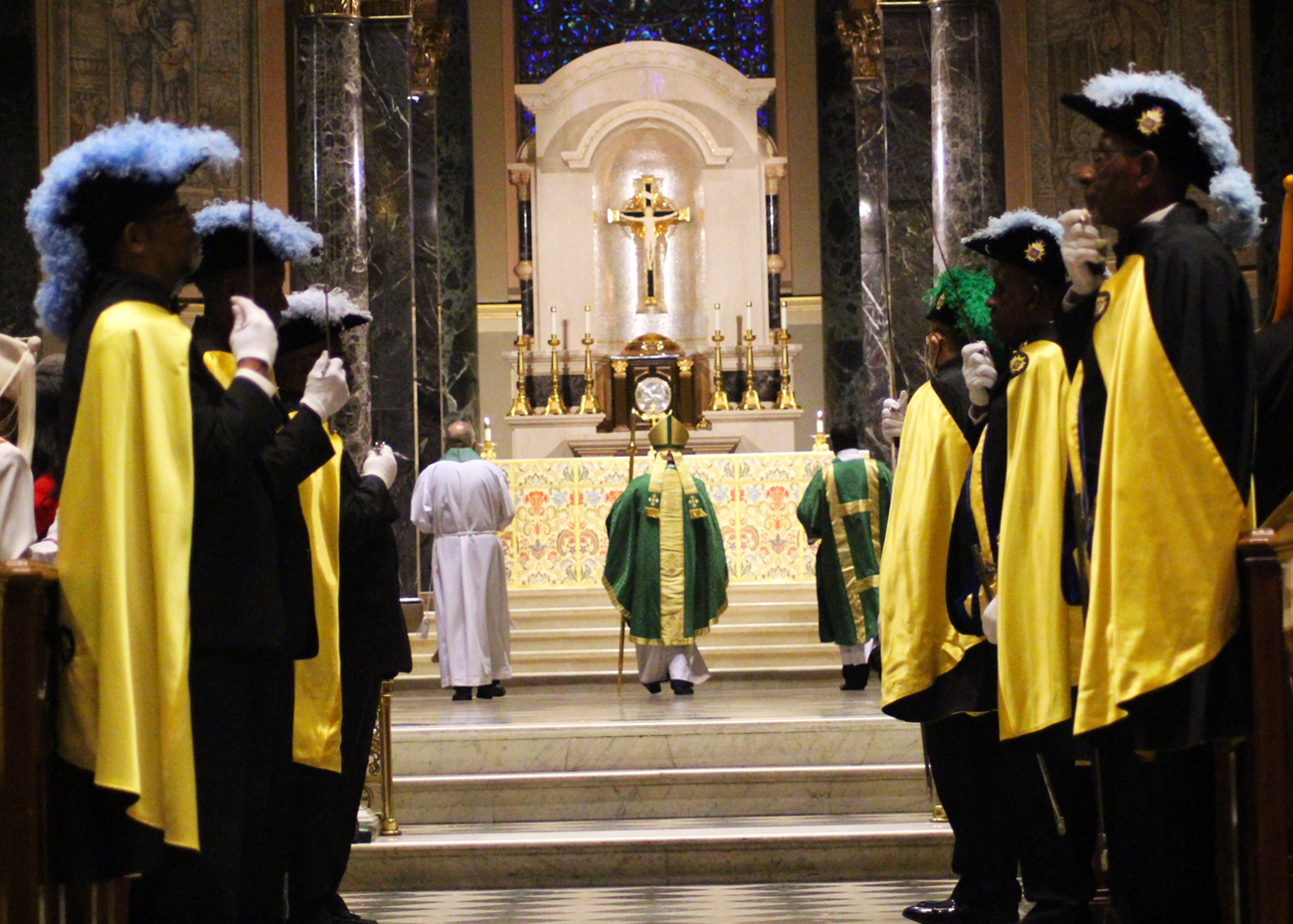 Knights of Peter Claver provide an honor guard for Archbishop Nelson Pérez and several concelebrants during a June 26 Mass in honor of Venerable Augustus Tolton at the Cathedral Basilica of SS. Peter and Paul. (Gina Christian)

NEXT: Seniors return to ‘second home’ at archdiocesan centers