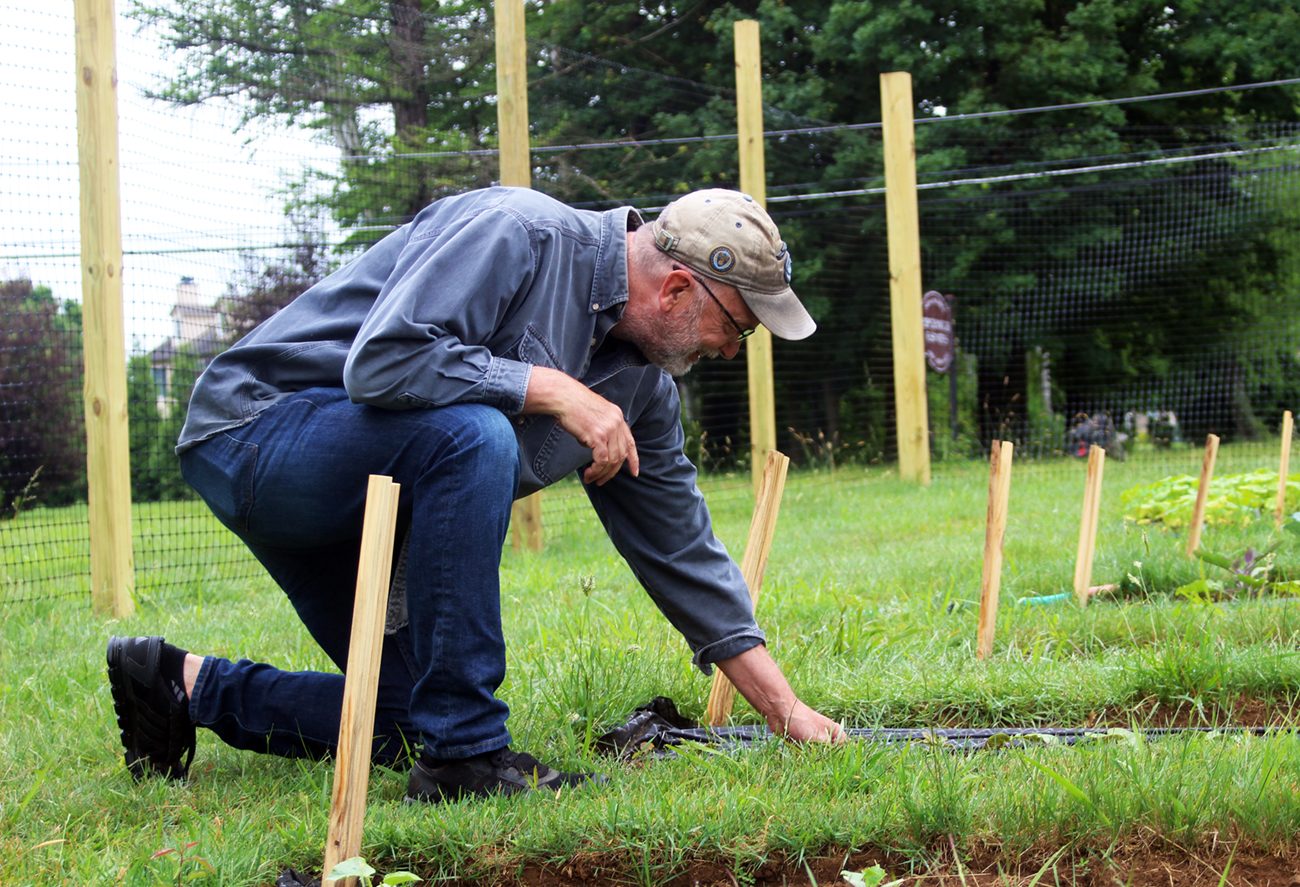 Steven Muntz of St. Cornelius Parish in Chadds Ford inspects a planting at the parish's new garden, the harvest of which will be donated to two Catholic outreaches serving the hungry in Chester and Montgomery Counties. (Gina Christian)

A Delaware County parish has created a garden whose roots – and fruits – are spreading far and wide throughout the Philadelphia Archdiocese.

This spring, St. Cornelius Parish in Chadds Ford parceled off a one-acre plot on its extensive campus to plant tomatoes, beans, eggplant, zucchini and other vegetables. When harvested, the produce will be donated to two area food banks: Martha’s Choice Marketplace, located at archdiocesan Catholic Social Services’ Montgomery County Family Service Center in Norristown, and the Dorothy Day Center, an outreach of St. Agnes Parish in West Chester.

“My aim is to give it all away,” said St. Cornelius pastor Msgr. David Diamond. “I figured since we have 60 acres of land here, let’s see what we can do.”

Parishioners of all ages have rolled up their sleeves to clear land, erect fencing, water, seed and weed, guided by expert advice from third-generation farmer H.G. Haskell III of nearby SIW Vegetables. Haskell also donated a number of plants while designing the irrigation system.

Although it’s early in the growing season, the results so far are promising, said Msgr. Diamond – even though a few folks haven’t quite caught on yet.

“A former parishioner who drove by said she was glad we were finally taking her advice about opening a cemetery,” he quipped.

On the contrary, he said, the garden is providing not only fresh food, but spiritual sustenance that is deepening faith, strengthening community ties and prompting social outreach. 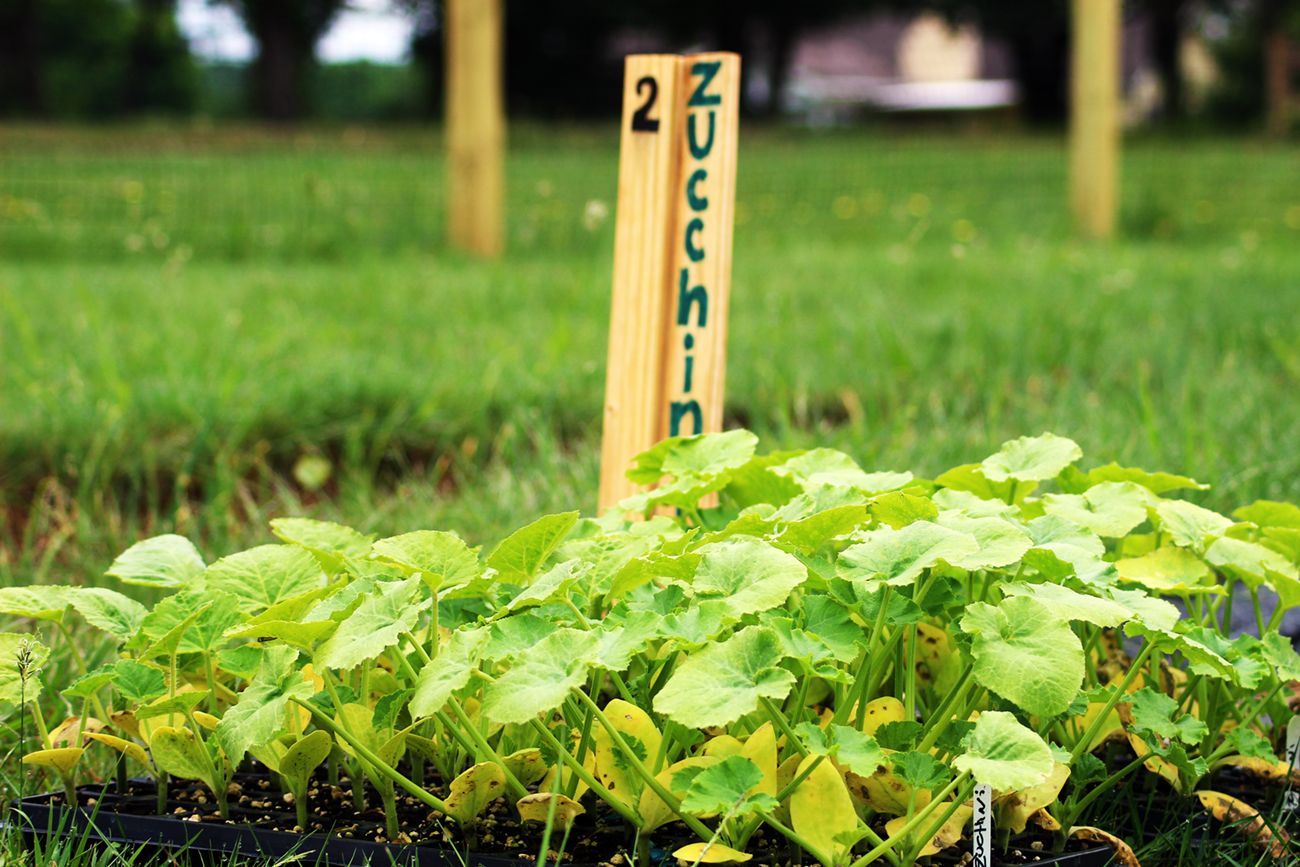 Zucchini plants are growing rapidly in a new garden at St. Cornelius Parish in Chadds Ford, with produce from the one-acre plot destined for two area Catholic outreaches that feed the hungry. (Gina Christian)

“People have jumped on board and they’re very excited about this,” said Msgr. Diamond. “And the best thing is that these are people I normally only see on Sunday. Now they’re getting involved in another way.”

Part of the project’s momentum is fueled by the parish’s newly created Catholic Relief Services (CRS) chapter, whose members have led the garden effort.

CRS members JoEllen and Steven Muntz were early supporters of the project, with Steven removing strips of grass to create planting rows and JoEllen drawing on her skills as a gardening hobbyist.

“This is our first year, so we’re taking baby steps,” she said, adding that as volunteers have pitched in, “someone always knows something or someone” to tackle various aspects of the project.

A parishioner connected the group to Haskell, while another was able to provide low-cost printing for the garden’s inspirational signage, which features quotes from St. Francis of Assisi and an image of St. Kateri Tekakwitha, patron of ecologists.

“Any age can get out here,” he said. “You can bring your seven-year-old child to pick tomatoes and put them in a basket, or Mom or Dad can take up shovels and hoes as needed. It’s that simple.”

St. Cornelius preschoolers have literally taken “field trips” to the garden, said Msgr. Diamond, and children from the parish religious education program will also assist with the project during the summer months.

The garden is a form of catechesis, said Steven Muntz.

“Msgr. Diamond has said that we’re Catholics and we like symbols, and this is really a symbol of what we’re about,” he said. “We’re taking the gift we have, planting and growing.”

And ultimately sharing the harvest of many hands, said Msgr. Diamond.

“It’s as St. Benedict said: ‘Ora et labora (prayer and work),” he said. “This is ora, this is labora. We’re not all Benedictines, but it helps others.” 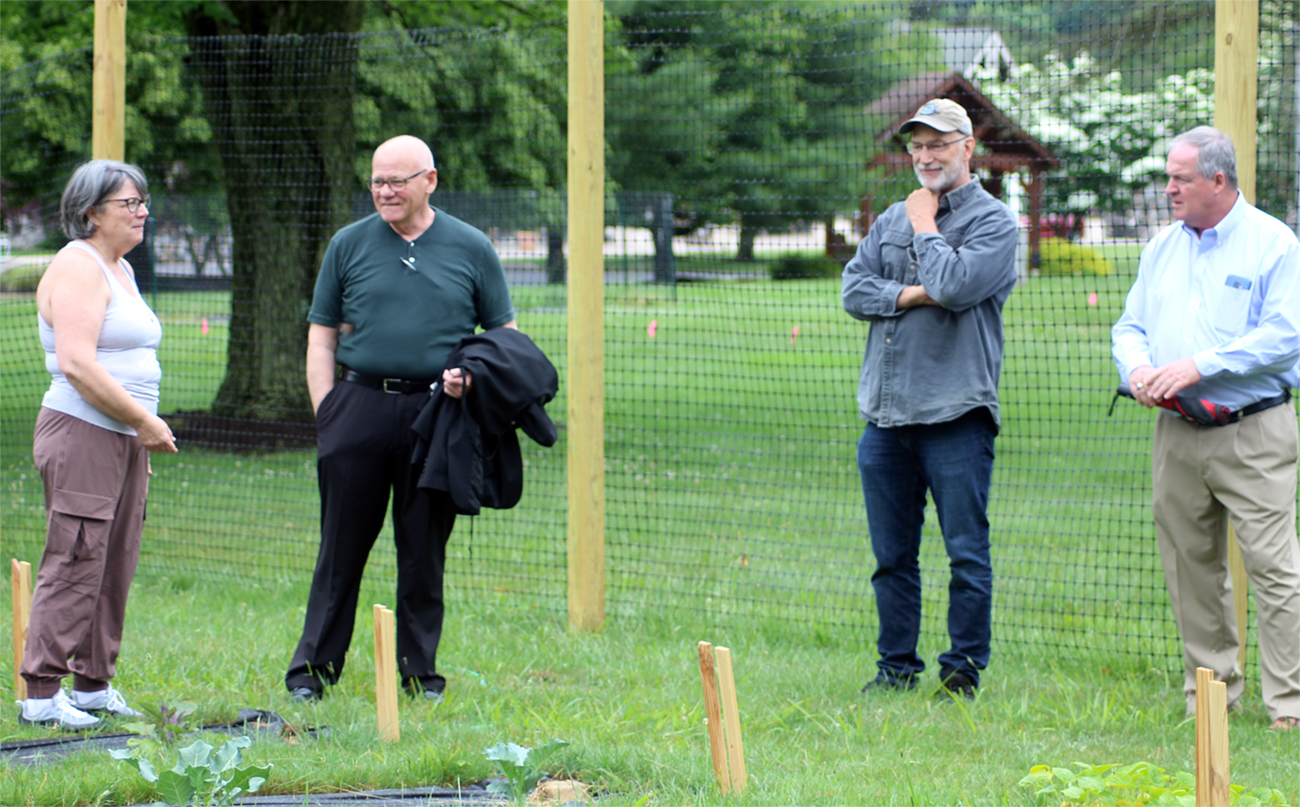