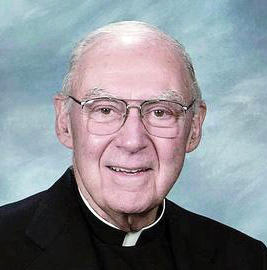 Msgr. James T. McDonough, a retired priest of the Archdiocese of Philadelphia and resident of Sunrise of Newtown Square, died Monday, June 14 at age 89.

He was born in Philadelphia, the son of the late Thomas J. McDonough and Louise M. Phillips. He attended Our Lady of the Rosary Parochial School in Philadelphia and West Philadelphia Catholic Boys’ High School before entering St. Charles Borromeo Seminary.

Msgr. McDonough was ordained May 11, 1957 at Immaculate Conception Church in the city’s Germantown section by Archbishop John F. O’Hara, C.S.C. In 1973 he was named an honorary prelate of Pope Paul VI, with the title of monsignor.

He served as parochial vicar at All Saints Chapel and Our Lady of Angels Parish, both in Philadelphia, and on the faculty at Roman Catholic High School for Boys, Philadelphia. He was a student priest at the Catholic University of America, Washington, D.C.

Msgr. McDonough served as assistant director of the Catholic Charities Appeal, a director in the Secretariat for Catholic Human Services and was pastor of St. Stanislaus Parish, Lansdale, from 1983 through 1989. He also served as the first regional vicar for Chester County from 1986 through 2006.

Most recently Msgr. McDonough served as director of the archdiocesan Society for the Propagation of the Faith from 2006 through 2014.

Reception of the Body will be held at St. Dorothy Church, Drexel Hill, on Thursday, June 24 at 9 a.m. followed by a viewing.

Archbishop Nelson J. Pérez, will celebrate the funeral Mass 10:30 a.m. Concelebrating will be Fathers Michael D. Murphy and Keith J. Chylinski, who will be the homilist.

Msgr. McDonough is survived by his cousins.

Interment will be at St. Denis Cemetery, Havertown.