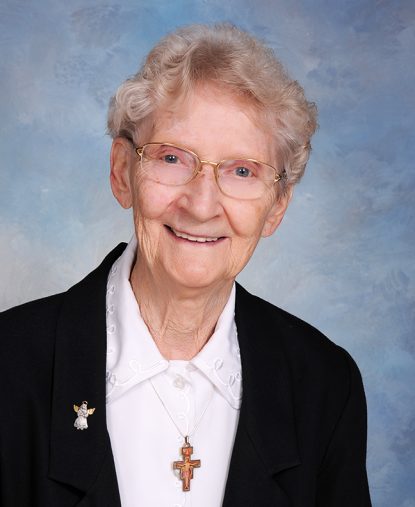 Sister Agnes Borkowski (formerly Sister Walter Josephine), O.S.F., died May 25 in St. Joseph Medical Center in Baltimore, Maryland. She was 93 and a Sister of St. Francis of Philadelphia for 72 years.

Sister Agnes was born in Baltimore where she was a member of Our Lady of Mt. Carmel Parish in Middle River. She entered the Sisters of St. Francis in 1946 and professed her first vows in 1949. She later earned a B.A. in political science from Neumann University.

Sister Agnes also ministered for 19 years in the Archdiocese of Philadelphia. She taught at St. Mary of the Assumption School in Philadelphia’s Manayunk section and All Saints School in Bridesburg, as well as at Nativity B.V.M. School in Media.

An additional four years were spent in the Diocese of Fall River, where Sister Agnes served as a staff member of St. Mary Home in New Bedford, Massachusetts.

In 1982 Sister Agnes moved back to her native Baltimore where she taught at Our Lady of Mt. Carmel School in Middle River and St. Elizabeth of Hungary School in Baltimore. In 1988 she began ministering at St. Joseph Medical Center in Towson, where she served in various support and volunteer roles for many years. She also volunteered at the Ambulatory Surgery Center.

The funeral Mass for Sister Agnes was celebrated June 2 at Immaculate Heart of Mary Church in Towson, Maryland. Internment of ashes followed at Holy Redeemer Cemetery in Baltimore.

Sister Agnes is survived by her sister Genevieve Gulczynski, her brothers John Borkowski and Robert Brandy, her nieces and nephews, and her Franciscan family.