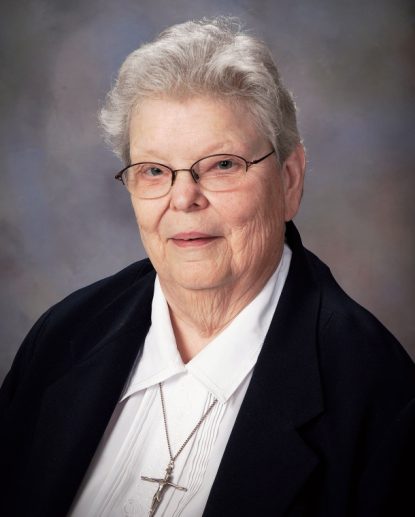 Sister Mary Elizabeth Schmidt, I.H.M., died June 26 in Camilla Hall, Immaculata in the 64th year of her religious life. She was 82.

Born in Harrisburg, Pa. to parents Raymond and Margaret (Daylor) Schmidt, she and her family later moved to Sacred Heart Parish in Lancaster. Her mother passed away in 1949 when Sister Mary Elizabeth was only 10 years old.

She attended Sacred Heart Elementary School and Lancaster Catholic High School, from which she graduated in 1957. That year she entered the Sisters, Servants of the Immaculate Heart of Mary. She received her religious habit and her religious name Sister Margaret Joann in 1958 and pronounced her first vows in 1960.

She taught primary grade children from 1960 to 1996 in many Catholic schools including Transfiguration, Gesu, St. Barnabas, SS. Clement/Irenaeus and St. Matthew, all in Philadelphia; Our Lady of Fatima, Bensalem; St. Thomas Aquinas, Croydon; St. Joseph, Downingtown, and St. Joseph/St. Robert, Warrington. From 1996 to 2000, she assisted at St. Anselm School, Philadelphia.

Later that year Sister Mary Elizabeth went to Sacred Heart Parish in Lancaster where she served as CCD coordinator until spring 2015.

She then served in the Apostolate of Prayer at Camilla Hall until her death.

Sister Mary Elizabeth is predeceased by her parents, her sister JoAnn (Reineberg) and her brother Raymond W. Schmidt. She is survived by her nieces, a nephew, grandnieces and grandnephews, in addition to her I.H.M. community.