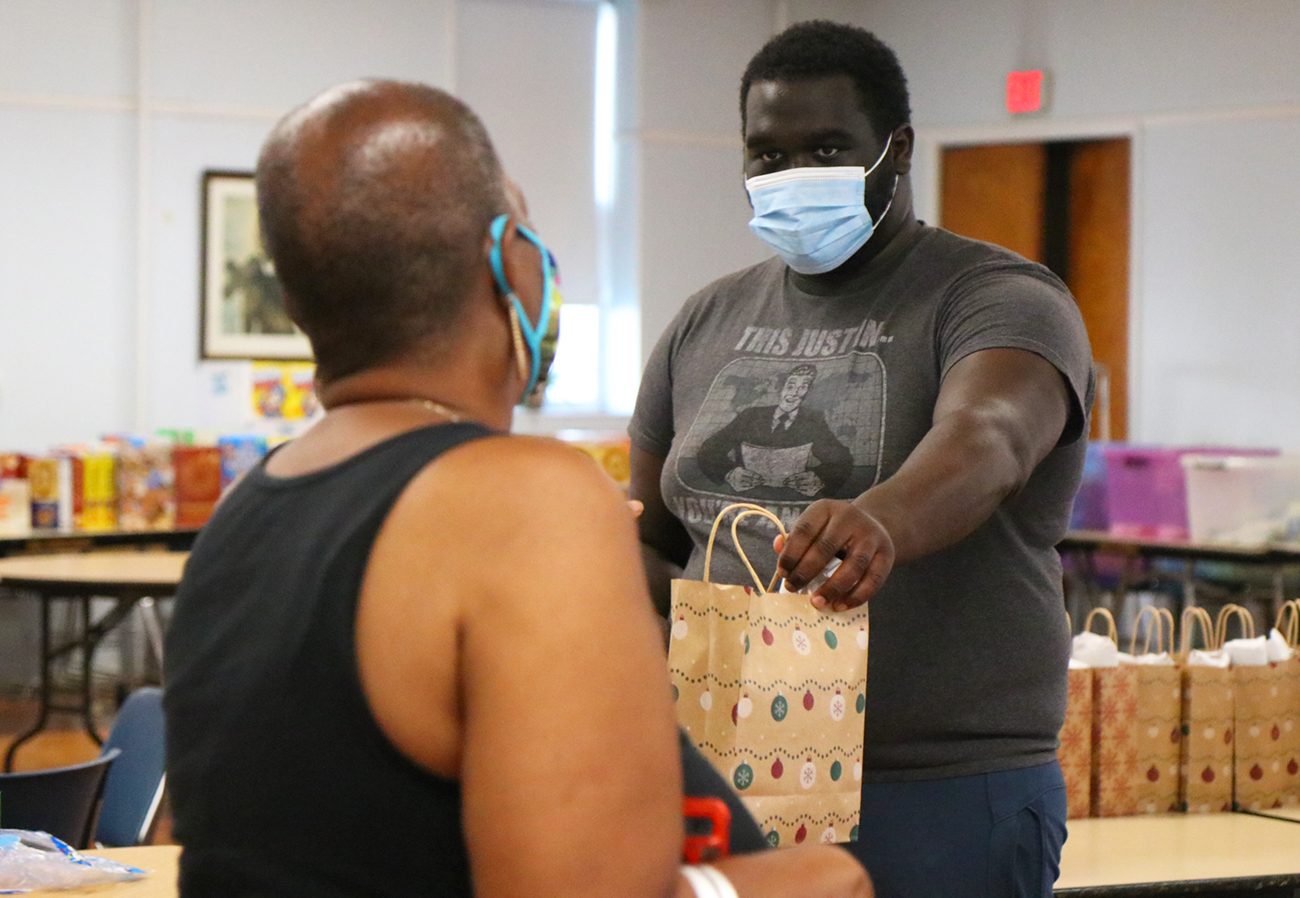 A volunteer hands out a "Christmas in July" hoagie lunch to a client of Anna's Place, a Franciscan hospitality center in Chester, during a July 22 visit by Archbishop Nelson Pérez. (Sarah Webb)

On July 22, the archbishop blessed staff and volunteers at the food pantry of St. Katharine Drexel Parish’s Evangelization Center and at Anna’s Place, an adjacent hospitality center operated by the Sisters of St. Francis of Philadelphia.

(See a photo gallery of the visit.)

Located at the former Immaculate Heart of Mary Parish, which merged with St. Katharine Drexel Parish in 1993, both outreaches provide critically needed support to an area where the poverty rate tops 31% and median household income falls well short of $33,000.

With just 34,000 residents, Chester also struggles with violent crime, and has consistently ranked as one of the state’s most dangerous municipalities.

But amid such challenges, hope and donations at the St. Katharine Drexel pantry “overflow,” said director Judy King.

“Our Lady of Guadalupe Parish in Buckingham donated about 3,000 pounds of food recently,” she said. “We still have barrels we have not yet emptied.”

Thanks to generous support from archdiocesan Nutritional Development Services (NDS), parishes, markets and individuals, the pantry provides an array of nonperishable items for clients, who visit St. Katharine on Tuesdays and Thursdays. Newly installed refrigerators, purchased with funding from a recent grant, keep fresh foods chilled; frozen selections are available as well.

In addition, said King, the pantry provides 35-pound “senior boxes” containing juice, powdered milk, cereal and pasta to supplement portions for older clients – although the number of recipients has dropped due to COVID.

“Clients were always asking for them, so we can give that to them now,” she said.

Next door, “at least 100 people come” to the Tuesday and Thursday food distributions at Anna’s Place, a Franciscan hospitality center, said co-director and Sister of St. Joseph Cathy McGowan.

Opened in 2009 and named for Anna Bachmann, foundress of the Sisters of St. Francis of Philadelphia, the center began distributing grocery and personal care items in March 2020, expanding its usual offerings of classes, bingo games and Thursday lunches.

During the archbishop’s visit, staff and volunteers handed out “Christmas in July” bags containing Wawa hoagies, funded by a benefactor.

As part of its mission statement, Anna’s Place fosters “an atmosphere where all feel safe and accepted” and affirms “the presence and giftedness” of individuals.

When a non-Catholic volunteer inquired about a Divine Mercy image upstairs in the former church, King took time to explain the devotion.

“He said, ‘Wow, that’s beautiful,’ and he actually went online and read about St. Faustina,” she recalled.

NDS executive director Lizanne Hagedorn, who accompanied the archbishop and several NDS board members on the July 22 site visit, said the outreaches “touch hearts and souls, and that’s what it’s about.”

“We’re living the Gospel,” he said. “In Chester, there are a lot of challenges, but we’re offering a beacon of hope to the people.”

NEXT: New program helps future priests ‘get the word of God out’ in perfect English