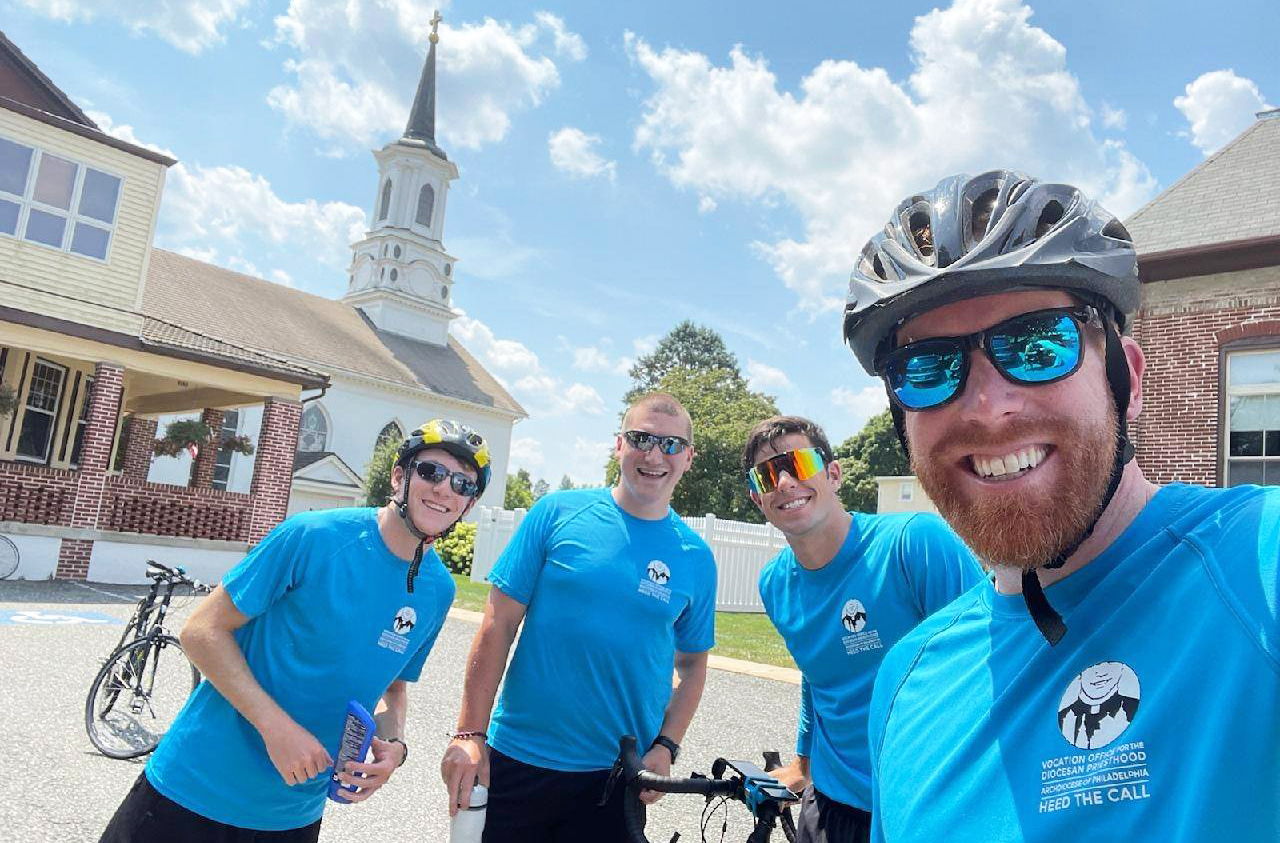 The seminarians look relaxed as they arrive at Most Blessed Sacrament Parish in Bally, in the Allentown Diocese, Aug. 6.

With tired legs but lively spirits, six seminarians from St. Charles Borromeo Seminary got to know about 40 parishioners and guests of Epiphany of Our Lord Parish in South Philadelphia, concluding the first day of Biking for Vocations on Wednesday, Aug. 4.

As part of the third annual tour of parishes and institutions in the archdiocese to promote vocations to priesthood, the cyclists had left the seminary that morning and stopped at St. Katharine Drexel Parish in Chester and St. George in Glenolden, Delaware County along the way before their visit to South Philadelphia.

They traced an interior route of 11 parish visits across the city and inner-ring suburbs. Meanwhile a second group of four cyclists – three seminarians and Father Christopher Cooke — rode the perimeter, a more grueling tour of 10 stops winding from the seminary to southern and western Chester County and on through Montgomery and Bucks counties, and even up to Allentown.

(See an extensive photo gallery from multiple stops of the event.)

Both legs of the tour ended Sunday afternoon, Aug. 8 at the Cathedral Basilica of SS. Peter and Paul, where the riders were met by a group of cheering well-wishers, among them Archbishop Nelson Pérez (also an experienced cyclist); cathedral rector Father Dennis Gill; Father David Friel, director of the vocations office; and Susan Matour, associate director of the archdiocesan Vocations Office for the Diocesan Priesthood which sponsored Biking for Vocations.

Father Friel, who accompanied the riders throughout the trip in a support vehicle, told the seminarians he was “grateful to watch and listen in on some of the conversations you have had and how many times you’ve been able to bring it back to Christ and a relationship with him. … A lot of good, priestly things have been happening during these days. I think a lot of people have been encouraged by meeting you.”

While he acknowledged that the days of riding were no “stroll in the park,” Archbishop Pérez noted the young men were fed well at the parishes they visited.

“That is an understatement, Archbishop,” said seminarian Thomas Cipolla. “We ate a whole pig at Resurrection (of Our Lord Parish).”

“As long as it didn’t eat you, that’s fine,” the archbishop replied.

(Read a related story covering the start of Biking for Vocations.)

Seminarian Robert Bollinger said he was touched by the encouragement he received while pedaling the tour’s interior route.

“A bunch of people throughout the Archdiocese of Philadelphia were praying for me and were trying to tell me how much they were supporting me and all of us biking, and even the guys at the seminary as well,” he said. “That was probably the biggest highlight I didn’t see coming.”

In a first for Biking for Vocations, the perimeter route cyclists ventured into the Diocese of Allentown, visiting Most Blessed Sacrament Parish in Bally and the Cathedral of St. Catherine of Siena in Allentown.

While every parish was “incredibly generous” and offered a “huge welcome,” the faithful at Allentown’s cathedral “were really great, and they had a lot of people out waiting for us when we arrived and cheering us on when we left the next morning,” said Matour, a key coordinator of the event. “They were very enthusiastic to have us there.”

Allentown Bishop Alfred Schlert “was so appreciative that we came into the diocese,” she said. “He was outside (his residence) waiting for us when we pulled in,” and offered ice cream, water and Gatorade to the riders.

Back in South Philadelphia, the seminarians visiting Epiphany Parish for prayer and discussion received encouragement not only for their cycling endeavors but also for their continuing studies.

The need for more young priests emerged as the dominant theme of the hour-long interaction, and the seminarians, joined by Auxiliary Bishop John McIntyre and Father David Friel, director of the vocations office, spoke happily of their acceptance of God’s will.

They explained their trek from the seminary earlier in the day to Epiphany in the broader context of their journey to a vocation in religious life.

“Please ask God to send us more priests and to bless these seminarians who have heeded their different calls to ministry,” said Father Friel, in his first year in helping men to discern their path. “May he help us all to understand how important it is to promote the joys of vocations.”

His comments, offered on the feast day of St. John Vianney, the patron of parish priests, drew ample praise from the flock including Josie Maurizi.

Dubbing the six 20-somethings “the hope of our church” during the panel discussion, she lauded the Biking for Vocations concept while also hoping to have more chances to learn about the seminarians.

“You really are so worthy of respect, especially when we think about all of the things that are out there that we all have to fight against as people of God,” Maurizi said. “I’m just so happy to be in your presence.”

Now entering his fourth collegiate year, Cipolla had, like his contemporaries, already spoken to Maurizi and the others about what drew him to respond to his vocational call. He said that while becoming a priest certainly involves sacrifices, God’s grace will prove the ultimate boost to anyone who feels called to the priesthood.

What is paramount to remember, as peer Mark Gomba explained, is that while they are listening to God’s voice, they are also feeding off the fire that each has for preaching the Gospel.

“When so many people in the world seem against our choice to become priests, it’s great to receive any bit of support that we can, and we’re delighted that you are here with us to receive ours,” he said.

Having covered 32 miles in just their first day of a tour that eventually totaled some 370 miles by Sunday, the seminarians on the interior route came to Epiphany on “a beautiful day for a ride,” according to cyclist Alex Cross.

After praying the Liturgy of the Hours together at Epiphany, he and his fellow discerners spent the night as parish guests before tackling more concrete and asphalt the next day, and adding more memories to their formation stories.

“Do you feel hopeful for these individuals?” Father Friel asked the parishioners, who responded with positive applause.

“Good, because God has placed them on a path that will heal so much that troubles us and give them a firmer will in the face of everything.”

Seminarian Dominic Mirenda got a glimpse of hope for the future in another sense as he rode the perimeter route and saw “so many beautiful moments on the bikes, off the bikes,” and especially as his group stopped at a parish in Wayne, Chester County.

“We had an absolutely amazing lunch with the youth group at St. Isaac Jogues Parish, and at the same time the student leadership from Bishop Shanahan High School was there,” Mirenda said. “We had a two-hour lunch with them and the kids were asking some amazing, really deep questions. And the Spirit was really moving … the kids were really engaged, (and) loved hearing our vocation stories.

“Overall the hospitality was absolutely beautiful, at all the parishes we went to,” he said.

The following are the cyclists of Biking for Vocations 2021, and their year in seminary (2021-2022) and home parish, or priestly assignment: