‘No words,’ only prayer, a year after deadly Beirut blast, says local priest 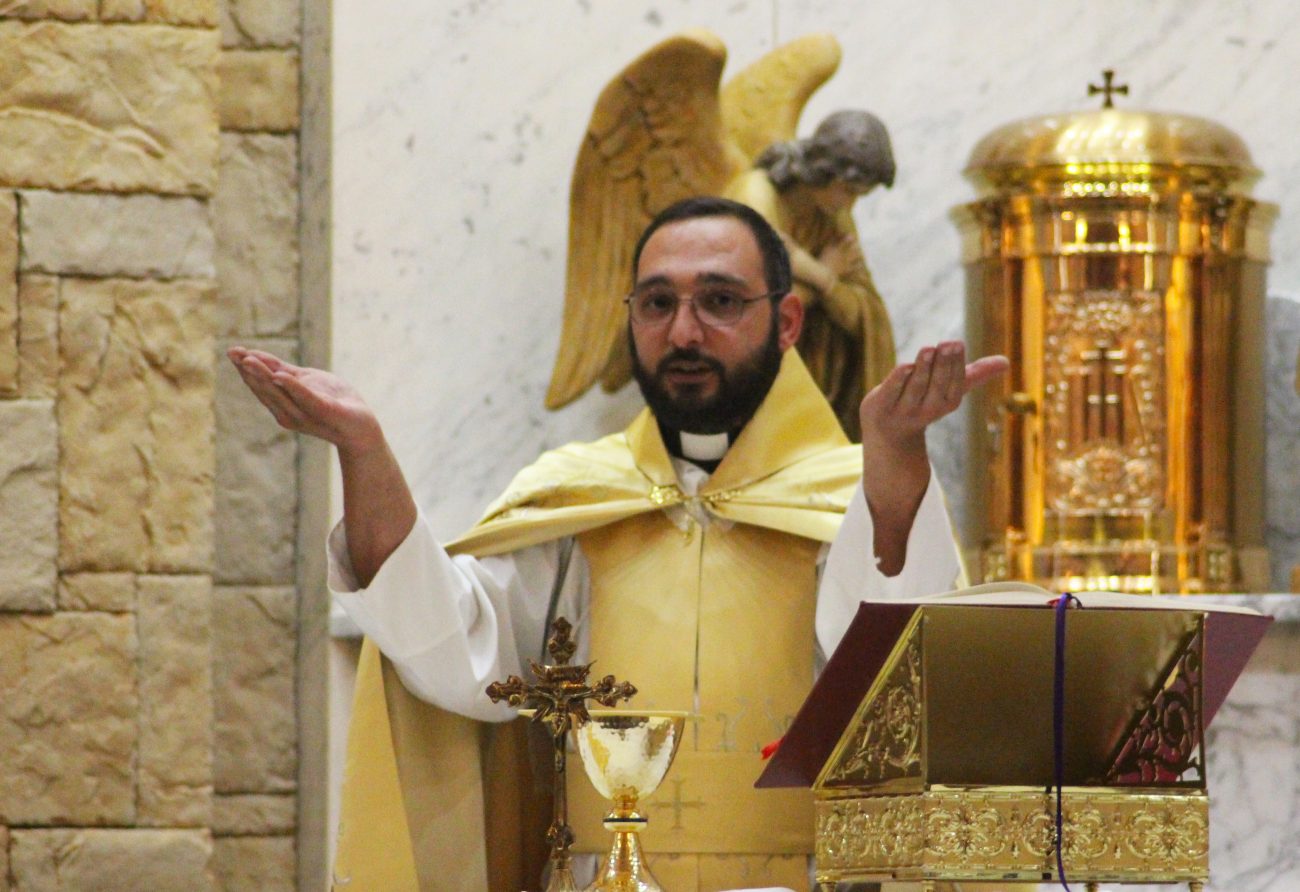 Months after a deadly blast rocked Beirut, a local Lebanese priest says he has “no words to explain” the entrenched suffering that continues to grip his native land.

Maronite Father Andrawos El-Tabchi, pastor of St. Maron Catholic Church in South Philadelphia, celebrated an Aug. 5 liturgy for victims of last year’s explosion at a Beirut port warehouse that killed more than 200 and left up to 300,000 homeless.

The blast, caused by an impounded shipment of ammonium nitrate, ranks as one of the largest non-nuclear explosions on record.

The Aug. 4, 2020 tragedy highlighted Lebanon’s longstanding political and economic dysfunction, which even before the COVID-19 pandemic had led to double-digit unemployment, widespread poverty and lack of access to safe drinking water, electricity and health care.

This July, caretaker Prime Minister Hassan Diab warned that Lebanon was just “a few days away from the social explosion,” with the currency’s value down over 90% and more than half the population impoverished. A month prior, the World Bank described Lebanon’s financial crisis as one of the world’s most severe since the mid-19th century.

More than 30% of Lebanon’s children are now going hungry, and 77% of the nation’s households are food insecure, according to a recent UNICEF report. Fuel, medicine and electricity are also in short supply.

The country has not had an active government since last year’s explosion, when Diab and his entire cabinet resigned amid protests over the tragedy. Nine months after being tasked with forming a new cabinet, prime minister-designate Saad Hariri stepped down July 15. Days later, billionaire and former prime minister Najib Mikati was tapped to lead Lebanon, although critics remain skeptical of his abilities to form an effective administration.

The 2020 port explosion (for which no one has yet been held accountable) and the pandemic have magnified Lebanon’s ongoing misery, said Father El-Tabchi, who arrived in the U.S. just two years ago. 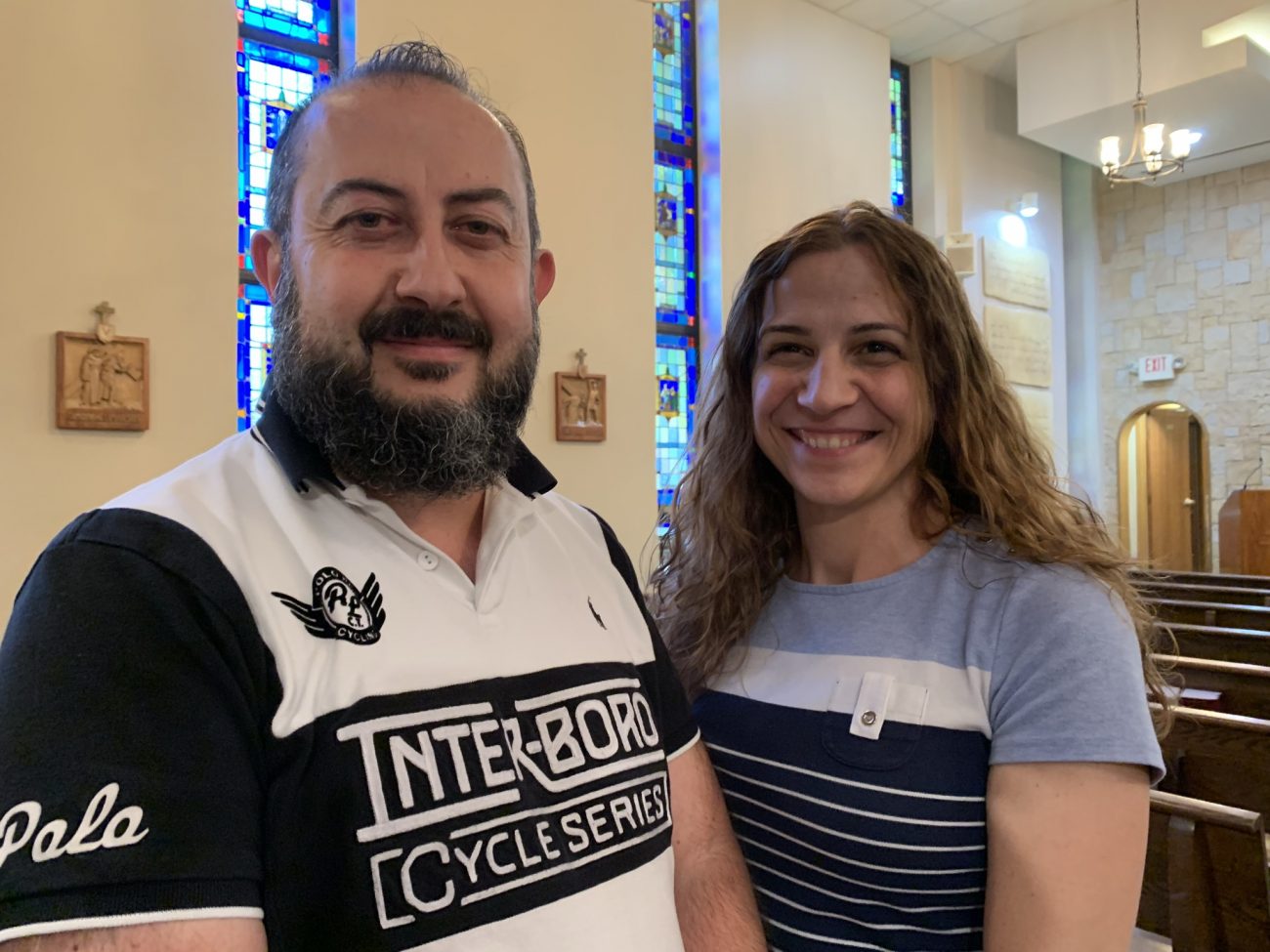 Manal and Claudette El-Hajal joined fellow parishioners at St. Maron Maronite Catholic Church in South Philadelphia for an Aug. 5 Mass in remembrance of those killed in last year’s deadly explosion at the port of Beirut. The liturgy was also offered for Lebanon’s struggles with multiple economic, political and humanitarian crises. (Gina Christian)

The country is “in total chaos,” he said, and “life for so many has turned into a living hell: no food, no water, no medical supplies.”

Father El-Tabchi’s own family — based in the northern coastal city of Batroun – struggles to obtain basic necessities.

“I called my sister and she told me, ‘We’re not finding the medicine for our father,’” he said. “She cannot find Tylenol for her kids, and my cousin cannot find diaper cream for her month-old son. … If my father cannot find his medicine, I don’t know if he’s going to have another day to live.”

Priests in Lebanon are also “in a very bad situation,” he said. “As Maronites, priests are allowed to marry, so if a priest has a wife and children, how will he be able to survive, to take care of his family?”

Maronite clergy in the U.S. are “trying as much as possible to send stipends” to their fellow priests in Lebanon “so they can live,” said Father El-Tabchi.

The anguish in Lebanon is shared by “Christians and Muslims and Druze,” he said. “It’s affecting all of Lebanon.”

His own mother has begged him to stay in the U.S., said Father El-Tabchi.

“She told me, ‘I miss you … I want to hug you, but please don’t ever think of coming back to Lebanon,’” he said. “If a mother has the heart to say this to her son, whom she hasn’t seen for two years, how would you think the situation is there?”

Amid such profound heartache, “Lebanon needs prayers and salvation,” said St. Maron parishioner Claudine El-Hajal, who joined her husband Manal and a dozen other parishioners at the Aug. 5 Mass, which was followed by eucharistic adoration and benediction.

Father El-Tabchi admitted during the liturgy that he had “tried to write a homily” for the occasion but gave up after four attempts.

“With all that is going on in Lebanon, I couldn’t think of anything to say other than what St. Paul said to the Corinthians in his second letter,” he said, quoting 2 Cor 1:3-4: “Blessed be God the Father of our Lord Jesus Christ, the Father of compassion and the God of all comfort. He encourages us in all our trials so that we may also encourage those in any trial with the same comfort that we receive from God.”

“We believe that he will not let Lebanon fall apart,” said Cardinal Rai in a July 18 homily marking the saint’s feast.

Divine assistance is what is most needed in Lebanon’s dark hour, said Father El-Tabchi.

“I want to pray,” he said. “And I urge you to pray with me for our beloved country Lebanon.”