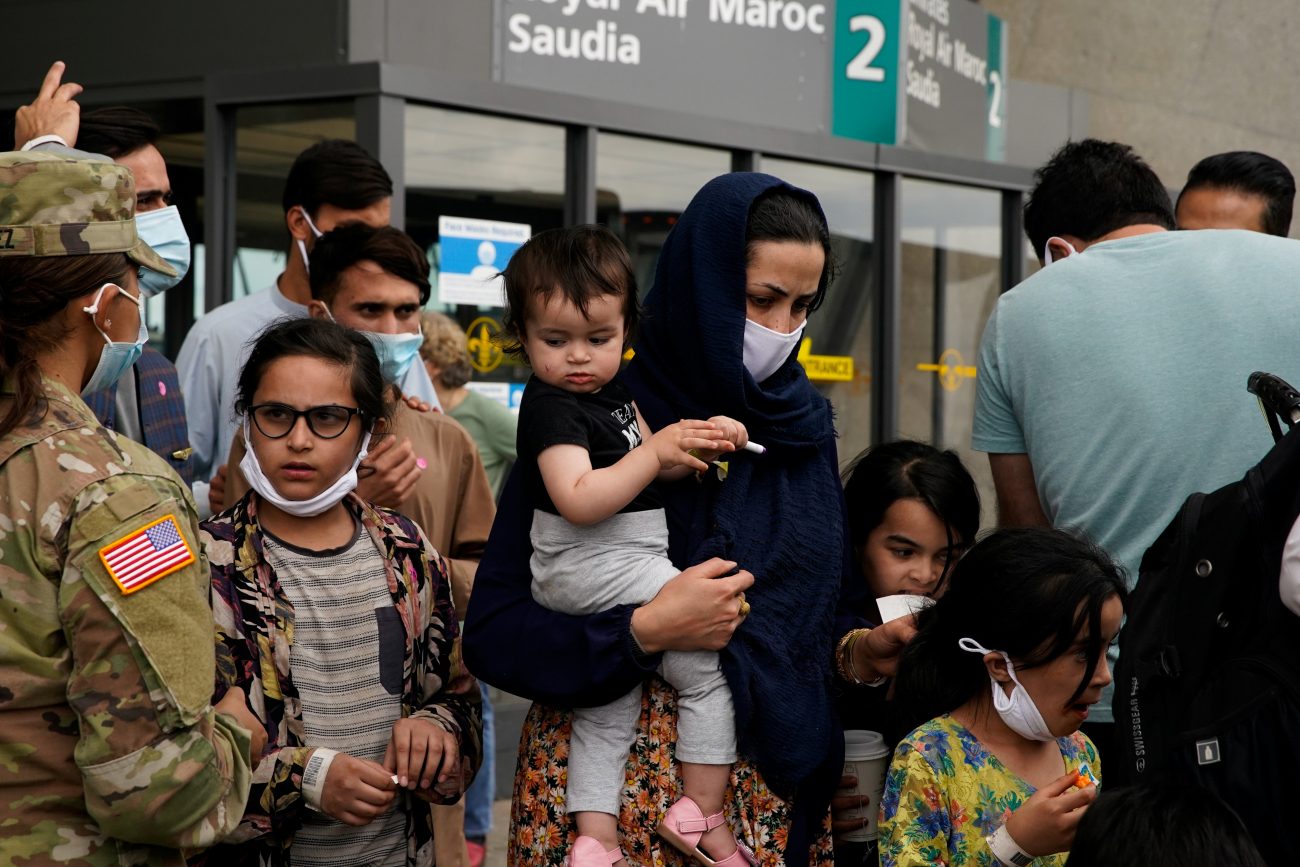 Afghan refugees in Dulles, Va., board a bus taking them to a processing center Aug. 29, 2021, upon arrival at Dulles International Airport. (CNS photo/Elizabeth Frantz, Reuters)

With population movements at record levels, “indifference” remains one of the greatest threats faced by migrants and refugees, said a Philadelphia bishop, adding that Catholics have a unique responsibility to overcome that obstacle.

“Jesus continues to be crucified on the Calvaries of the 21st century,” said Philadelphia Auxiliary Bishop Edward M. Deliman. “Indifference continues to condemn the man on the cross, and him in whom Jesus lives. As followers of Jesus Christ, we are called to see (his) face in all of our brothers and sisters.”

Bishop Deliman shared his insights during a homily for a Sept. 20 Mass he celebrated at the Miraculous Medal Shrine in Philadelphia. Sponsored by the archdiocesan Office for Cultural Ministries (OCM), the liturgy anticipated the 107th World Day of Migrants and Refugees, annually marked by the Catholic Church on the last Sunday of September.

For last week’s Mass, which drew some 100 participants, Bishop Deliman was joined by numerous concelebrants from the shrine and the various archdiocesan cultural communities, as well as representatives from the archdiocesan Office for Pastoral Care of Migrants and Refugees (PCMR), the Office for Black Catholics (OBC) and the Office for Hispanic Catholics (OHC), which comprise the OCM. The Philadelphia Catholic Gospel Mass Choir, under the direction of composer Tonya Taylor-Dorsey, provided liturgical accompaniment.

As part of this year’s migrants and refugees observance, Pope Francis titled his message “Towards an Ever Wider ‘We,’” a unity he said is currently under threat from the pandemic, “myopic and aggressive forms of nationalism … and radical individualism.” 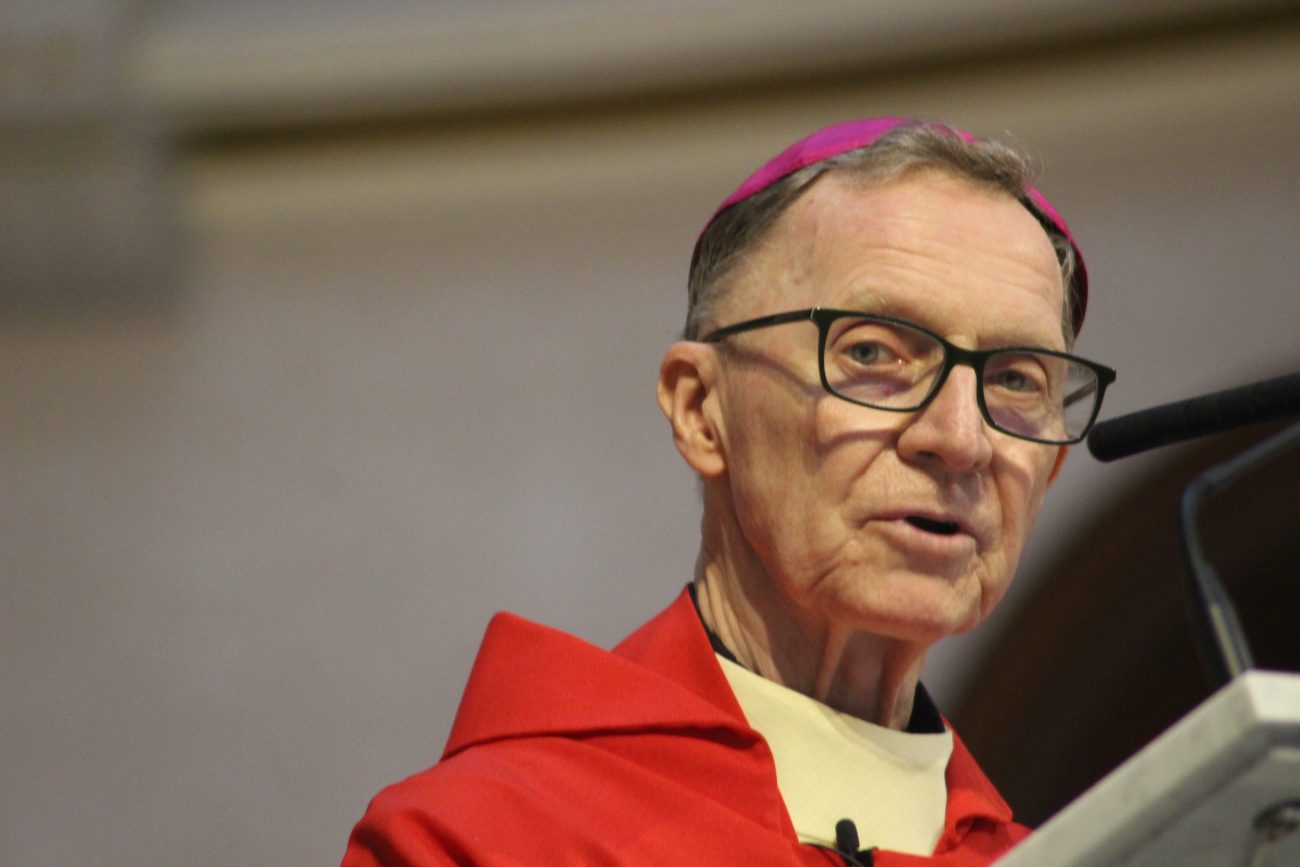 During a Sept, 20 Mass at the Miraculous Medal Shrine,
Philadelphia Auxiliary Bishop Edward Deliman said indifference is one of the greatest threats currently faced by migrants and refugees. (Gina Christian)

The pope said such conditions exact “the highest price” from “foreigners, migrants, the marginalized (and) those living on the existential peripheries.”

According to the United Nations (UN), last year saw some 82.4 million forcibly displaced people worldwide due to persecution, conflict, violence, human rights violations and other factors.

Last week’s Mass featured “special attention to the people of Haiti and Afghanistan, our brothers and sisters who are suffering from … an earthquake and political upheaval respectively,” said Religious Sister of the Assumption Gertrude Borres, director of the PCMR office.

“Many from Afghanistan and Haiti and from too many other places find themselves in impossible situations,” said Bishop Deliman, citing news images of “cargo planes packed to the gills, faces clouded by fear” and “folks running away from tyrannical governments pursuing their own people.”

While the pandemic has curtailed migration, overall displacement has risen in the past decade, from 1 in 159 in 2010 to current levels of 1 in 95, or more than one percent of the world’s population.

Pope Francis said the global issue of migration is a reminder that “we are all in the same boat and called to work together” to forge “a single ‘we,’ encompassing all of humanity.” 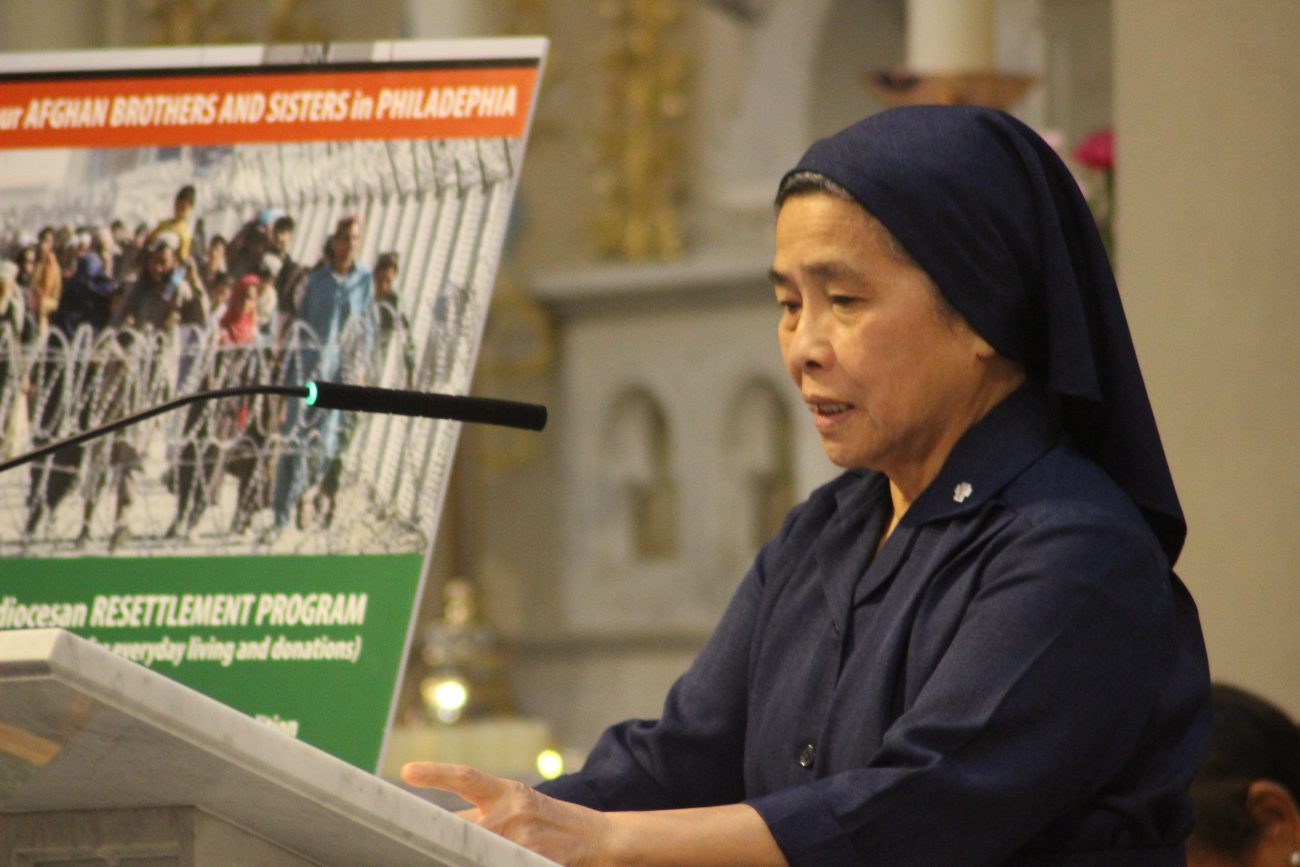 During a Sept. 20 archdiocesan Mass for migrants and refugees, Daughter of Charity Sister Michelle Nguyen recounted her harrowing escape from Vietnam after its fall to communism. (Gina Christian)

The pope’s analogy is an all too real one for Vietnamese-born Sister Michelle Nguyen, a Daughter of Charity who fled her homeland after South Vietnam fell to communist forces in April 1975.

Along with thousands of other Vietnamese, Sister Michelle made multiple efforts to escape via small fishing boats. During one attempt, she was arrested and imprisoned for six months. Following a novena to St. Vincent de Paul, she received word of her release, and immediately sought passage on another vessel, from which she and close to 80 others (including more than 20 children and two pregnant women) were rescued, after almost a month at sea with no provisions and only rainwater to drink.

While at a refugee camp in Thailand, Sister Michelle met with UN refugee contacts who enabled her to seek asylum in Canada, where her sister lived. She moved to her congregation’s convent in Montreal, ministering in that city for 17 years before moving to the order’s Philadelphia community.

The Catholic Church plays a crucial role in aiding those whose homelands are hostile, said Romulo Alvarado Martinez, who along with his wife and children came to Philadelphia 19 months ago from Honduras.

Martinez’s statement, read at last week’s liturgy by Religious Sister of the Assumption Mary Ann Azanza, recounted how Honduran maras (gangs) had rendered the family “prisoners in (their) own home for three years” prior to their emigration.

As with most migrants, the Martinez family had exhausted all of its options before embarking on the dangerous journey to the U.S.

“We reported our situation to the appropriate authorities, but nothing ever got better,” he wrote. “In fact, it only got worse.”

Relying on their faith, the family contacted the Sisters of St. Joseph upon their arrival in the city.

“From that moment, we were received as if they had known us all of our lives,” Martinez wrote. “They welcomed us in the convent, and we received support at all levels.”

Such practical support stands in stark contrast to the lack of concern migrants too often face, said Bishop Deliman, quoting Anglican clergyman Geoffrey Studdert Kennedy, whose 1929 poem “Indifference” contrasts Christ’s historical crucifixion with a modern Passion in which a distressed Jesus is simply ignored: “When Jesus came to Birmingham they simply passed Him by/They never hurt a hair of Him, they only let Him die.”

“Open your eyes from the blindness of indifference and be reminded of the Lazarus that’s under your table, or your doorstep – or the Lazarus we refuse to make eye contact with when we’re walking about,” said Bishop Deliman.

Replacing barriers with bridges is exactly what the OMC ministries are working to do, said OBC director James Andrews.

Even before Pope Francis called for “a wider we,” the three OMC offices decided “we would partner on all of our upcoming events to support each other,” said Andrews. “We will always be us; it will no longer be them and us.”