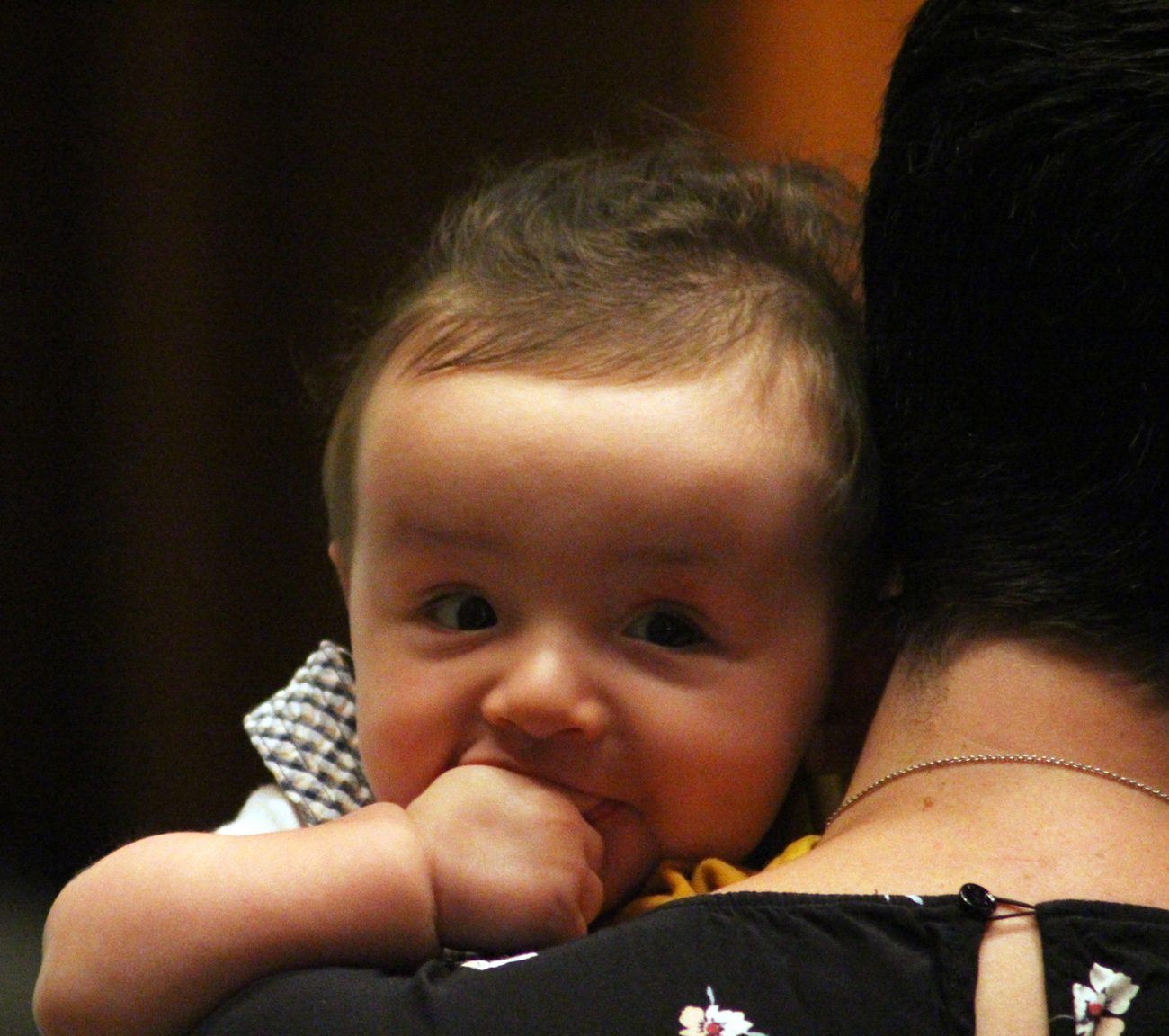 Five-month-old Jude Jozefowski rests on the shoulder of his mother Molly during a July 17 Mass at the Cathedral Basilica of SS. Peter and Paul. The liturgy preceded a prayer walk and rally sponsored by the Pro-Life Union of Greater Philadelphia at a downtown abortion clinic. (Gina Christian)

With Respect Life Month just days away, the pro-life movement is at a “very energized” moment, say local advocates – even and especially as legislative efforts accelerate to make abortion on demand a constitutional right.

“We’ve got some pretty pumped people out there,” said Steven Bozza, director of the archdiocesan Office for Life and Family.

On Sept. 26 at 11 a.m., Archbishop Nelson Pérez will celebrate an opening Mass at the Cathedral Basilica of SS. Peter and Paul for the annual Respect Life Month observance. The liturgy, sponsored by Bozza’s office, will be followed by a brunch reception with the Sisters of Life.

An initiative of the U.S. bishops, Respect Life Month traces its origins to 1972, just prior to the U.S. Supreme Court rulings on Roe v. Wade and Doe v. Bolton, the two 1973 decisions that to date have resulted in over 61 million abortions in the U.S., an average of 2,000 per day.

The Roe v. Wade ruling defined the fetus as not a person but a “potential life” without constitutional rights of its own, while limiting state regulation of abortions according to each trimester. Through Doe v. Bolton, state regulation of abortion was prohibited during all trimesters if the procedure was sought for reasons of maternal health, including “physical, emotional, psychological, familial” factors or the woman’s age.

Despite the Biden-Harris Administration’s efforts to pass the Women’s Health Protection Act of 2021 (H.R. 3755) — which frames abortion at any stage of pregnancy as a “human right” and part of “women’s health care” – the tide is turning against abortion, said Bozza.

“Young people are increasingly pro-life,” he said. “At the March for Life in Washington D.C., you’ll see that three quarters of the participants are young adults and teens. We are winning the next generation.” 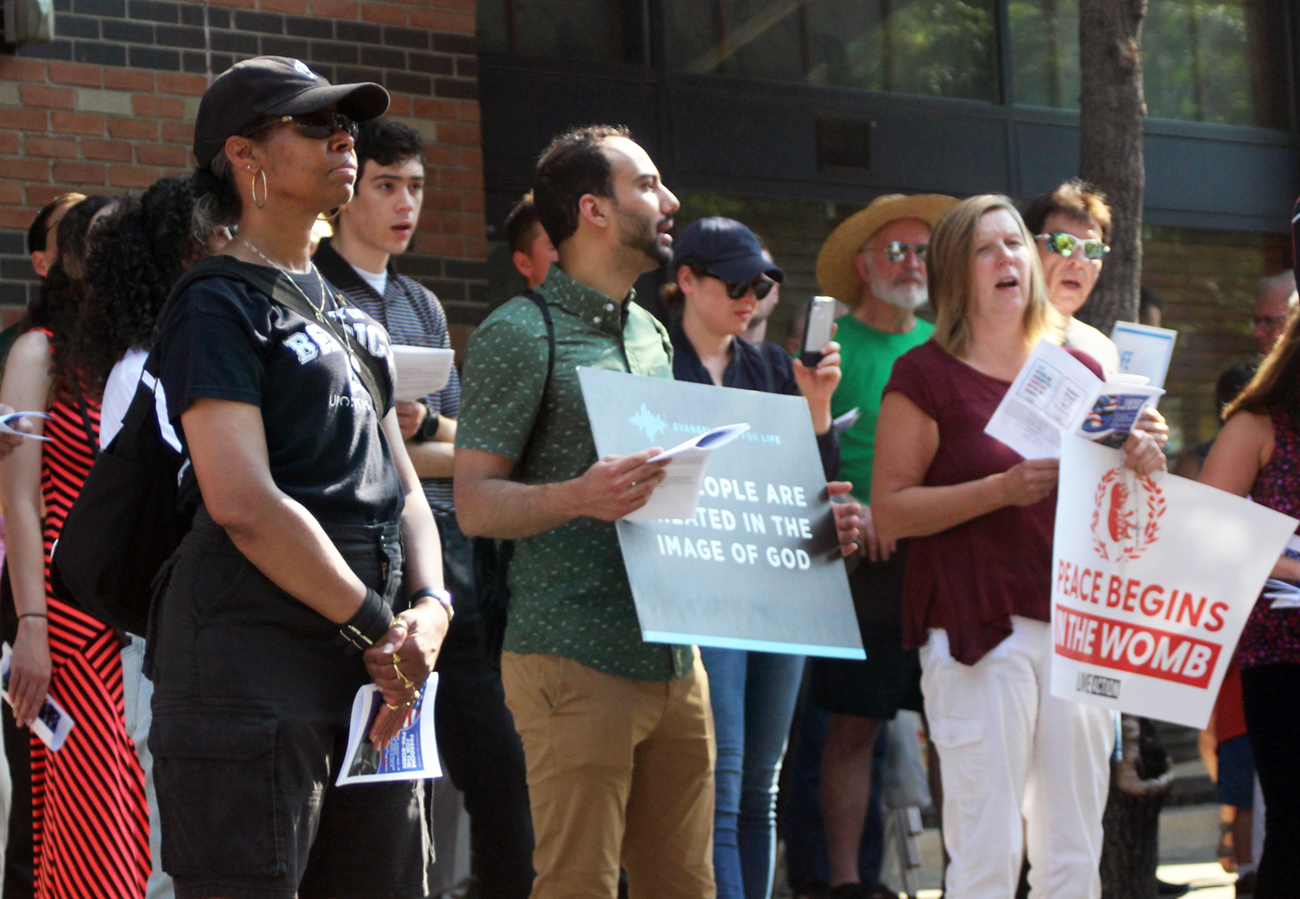 Participants stand before a downtown Philadelphia Planned Parenthood clinic during a July 17 rally and prayer vigil sponsored by the Pro-Life Union of Greater Philadelphia. (Gina Christian)

In addition to educational outreaches by his office and organizations such as the Culture Project, Bozza cited the organic growth of once seasonal efforts — such as the 40 Days for Life pro-life witness during Lent — into “year-round prayer vigils at abortion clinics.”

“People see that once those 40 days are over, there’s nothing stopping anybody from continuing,” he said. “And that’s really the intent.”

The Pro-Life Union of Greater Philadelphia hosts “a number of marches” throughout the year, Bozza said, with events attracting attendees in both bitter cold and summer heat.

The first Pennsylvania March for Life will take place in Harrisburg Sept. 27, coinciding with the state House of Representatives’ return to session. Co-sponsored by the March for Life and the Pennsylvania Family Institute, the rally is expected to draw participants from throughout the archdiocesan area – including Rob Hasek of St. Cornelius Parish in Chadds Ford, who is coordinating a bus trip to the capitol for the gathering.

“I think because of the pro-life movement over the years, you’re seeing a reevaluation of this issue,” said Hasek, who predicts “a real ideological battle” in the coming months over “it’s a human life versus it’s not.” 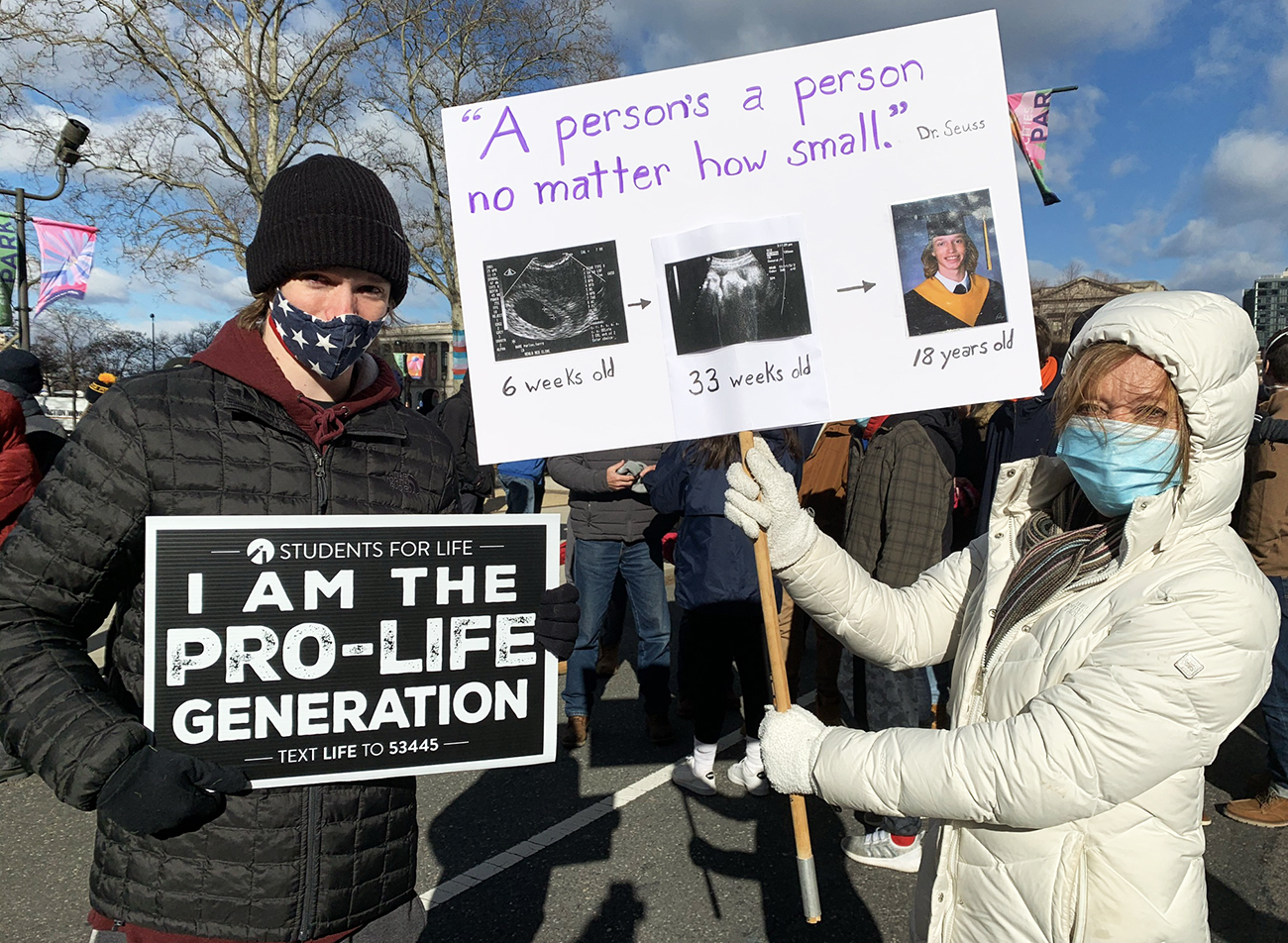 At the Jan. 23 Philadelphia March for Life, Luke Parlee and his mother Terry of Our Lady of Guadalupe Parish in Buckingham displayed ultrasound images of his development at 6 and 33 weeks alongside his high school senior portrait. (Gina Christian)

Both Hasek and Bozza stressed that ultrasound machines have increased awareness of fetal development. The Knights of Columbus, of which Hasek is a member, has funded the purchase of such devices for crisis pregnancy centers across the nation.

Even without medical imaging, unborn children make their personhood known, said Montgomery County Detective James Wood, one of the lead investigators in the case against notorious abortionist Kermit Gosnell.

“Put your hands on the stomach of a woman who’s four or five months pregnant, and feel that child doing loop-the-loops in the womb,” said Wood, an archdiocesan parishioner, lifelong law enforcement professional, father and grandparent. “You can’t tell me that putting a needle or taking a medicine to kill a human being, just because it’s under a thin layer of skin, is normal. Let’s not sugar coat it: the baby feels pain.”

A 2011 grand jury report, written by members with a wide range of views on abortion, labeled Gosnell’s West Philadelphia clinic a “baby charnel house,” and Wood himself vividly recalls the filth and stench of the facility, in which discarded remains of infants (including those of a 19-week-old baby) were stored in cabinets, bags, plastic jugs, cat food containers and the office freezer.

Gosnell – now serving 30 years for illegal drug charges, plus multiple life sentences for the deaths of three babies and one woman — didn’t in practice distinguish between abortion and infanticide, said Wood, who initially pursued the former doctor for operating a pill mill.

“His thought process was, ‘I don’t really know how to do an operation on the inside of the woman, so what’s the difference between killing the baby outside or inside the womb?’” said Wood. “I think he believed that since it was already OK for him to (perform abortions), he wasn’t adding anything different to what was going on (in other abortion clinics) anyway.”

Throughout his career, Wood has seen a number of women exploited by the abortion industry under the guise of self-empowerment and liberation.

“The women are being urged on to have an abortion, but it’s not in their best interests,” he said, noting in particular the long-term physical and psychological damage he has seen in women who have had multiple abortions.

Like Bozza and Hasek, Wood said he’s “optimistic” that pro-life efforts will succeed in changing attitudes toward, and legislation regarding, abortion.

Hasek believes the legal process will entail a “piece by piece” dismantling of the Roe and Doe decisions, while attitudes toward the unborn will shift as pre- and neonatal technologies enable even “very early babies to survive.”

Regardless of available health care options, said Wood, “it should be inherent in everyone that human life is important.”

PREVIOUS: Festival brings Padre Pio to the people, and the people to God

NEXT: Indifference towards migrants, refugees shows ‘Jesus continues to be crucified,’ says bishop