Pro-life advocates ‘light in the midst’ of darkness, says archbishop 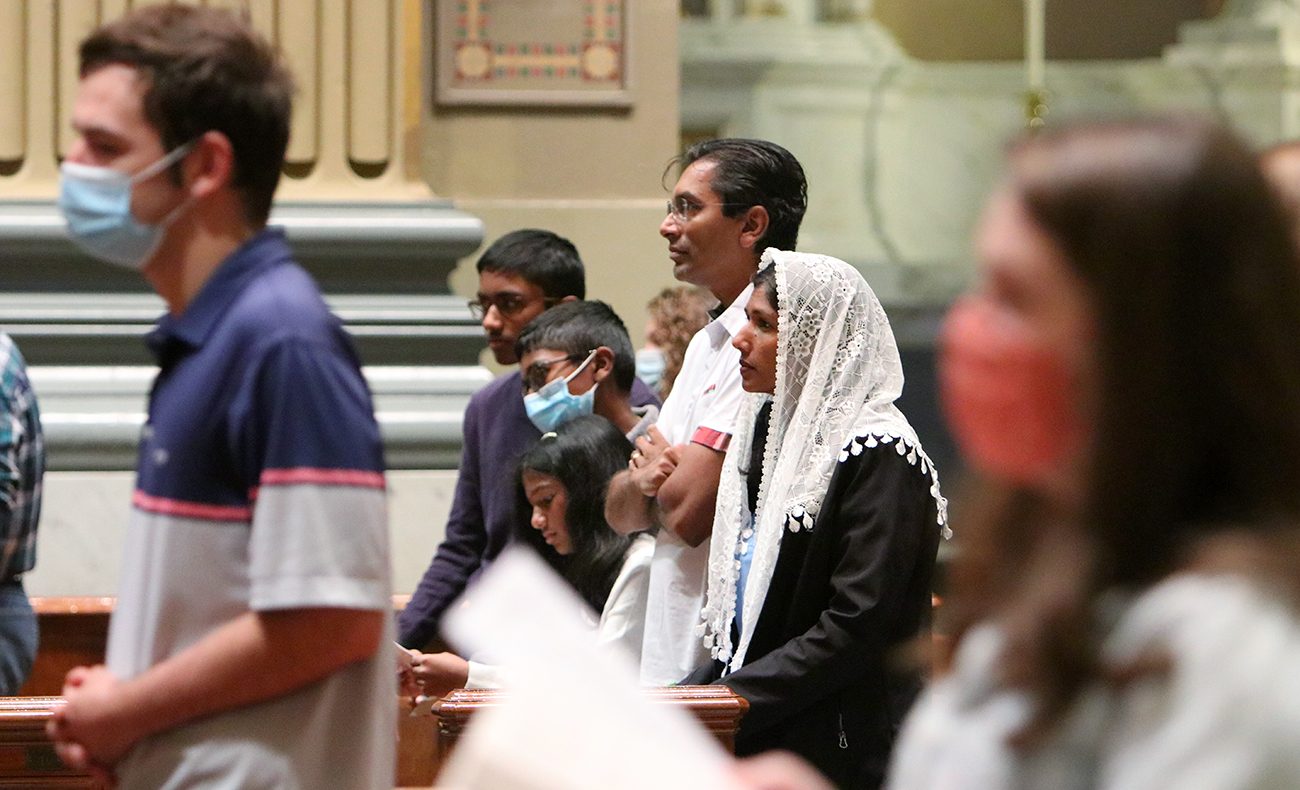 Pro-life advocate Dr. Monique Ruberu and her family stand in prayer during a Sept. 26 archdiocesan opening Mass for Respect Life Month at the Cathedral Basilica of SS. Peter and Paul. (Sarah Webb)

Those who advocate for the defense of human life are “lights in the midst” of a shadowed human history, said Archbishop Nelson Pérez.

On Sept. 26, the archbishop was the celebrant and principal homilist for the 2021 archdiocesan Respect Life Mass at the Cathedral Basilica of SS. Peter and Paul. Sponsored by the archdiocesan Office for Life and Family, the liturgy – which drew some 300 participants — anticipated Respect Life Month, an annual initiative of the U.S. bishops observed each October to promote human dignity from conception to natural death.

The effort traces its origins to 1972, just prior to the U.S. Supreme Court rulings on Roe v. Wade and Doe v. Bolton, the two 1973 decisions that to date have resulted in over 61 million abortions in the U.S., an average of 2,000 per day.

Those figures, which average “close to one million abortions a year” in the U.S., show that “life became cheap” following the legalization of abortion, said Archbishop Pérez in his homily.

Despite tremendous technological advances, he said, future generations will “look upon our moment in history and they will say, ‘They really lost respect for life.’”

At the same time, “people of good will and people with their hearts in the right place … many of them people of faith” have upheld “the sacredness of life, from conception to natural death,” he said. “And that will be a light in the midst of the shadows of our history.”

Several pro-life advocates were on hand for the liturgy, including Steven Bozza, director of the archdiocesan Office for Life and Family; the Sisters of Life, who sponsored a brunch reception afterward; Judith Secoda, development manager of the Legacy of Life Foundation, a nonprofit that provides comprehensive abortion alternatives for women in crisis pregnancies; Pat Stanton, a board member of the Pro-Life Union of Greater Philadelphia; and Dr. Monique Ruberu, a Philadelphia-area obstetrician and gynecologist who founded Sidewalk Servants and serves on the national board of the international 40 Days for Life campaign.

In her remarks prior to the Mass, Secoda said “an average of 900 women walk through (the foundation’s) doors every year, seeking an abortion because they feel abandoned and helpless.”

The pandemic has left women in crisis pregnancies “feeling more alone and more desperate than ever,” she said.

In response, the foundation is looking to raise $10,000 to provide 100 women with free supportive services, which include counseling, ultrasound imaging and life skills training for three years.

Outreach, coupled with prayer, can profoundly reduce the number of abortions, said Dr. Ruberu, who recounted a recent sidewalk vigil at which a lone volunteer, quietly praying, witnessed four women turn away from entering the Philadelphia Women’s Center, which annually performs more than 6,400 abortions.

While the center’s slogan brags “abortions are all we do,” said Dr. Ruberu, its clients are largely unaware that “this innocent, beautiful life … within a mother’s womb … is so precious, so blessed, so worthy to be fought for” – or that they themselves have other options.

“Oftentimes, these poor women are entering into these places purely out of fear,” she said. “Fear they don’t have the resources, the community; fear their education will be ended, fear the father is going to leave them. That’s where we come in.”

“You’ve got to put on the armor of God to be there at the clinics,” he said.

Faithful “need to increase (their) efforts of prayer, fasting and good words to bring about restored protections of the unborn,” said Father Dennis Gill, Cathedral rector and director of the archdiocesan Office for Divine Worship.

Quoting Pope Francis, the archbishop said “the defense of life is not an ideology for the church,” but rather “always manifests in a person in flesh and blood.”