At St. Mary’s Franciscan Shelter for Homeless Families in Phoenixville, a former Catholic school (foreground) has been transformed into four apartments for women and their children transitioning to permanent housing. At rear is the shelter for up to five women and their families, operating in a former convent since 1987. (Photo by Matthew Gambino)

St. Mary’s Franciscan Shelter for Homeless Families took an important step in helping to break the cycle of poverty for women and their children in Phoenixville on Thursday, Sept. 23 when supporters cut the ribbon on a new transitional housing unit.

It was the culmination of a project six years in the making, which repurposed a 160-year-old convent and school building to help homeless residents achieve independence.

(See a photo gallery of the blessing ceremony with more views of the facility here.)

The shelter began in 1987 when the Sisters of St. Francis of Philadelphia converted the former convent of the Immaculate Heart of Mary Sisters, who served in the school of St. Mary of the Assumption Parish for a century.

During that time a parish school dating to 1860, along with a second school building and gymnasium built in the 1960s, hosted generations of Catholic students.

Some of them, a bit grayer now, were present for the ribbon cutting of the new facility, which was blessed by Deacon Mark Nowakowski of St. Basil the Great Parish in Kimberton.

Although the second building and gym were newer, they were not structurally sound to serve as housing, and were razed.

That resulted in a green lawn at the foot of the building rehabbed for about $1 million that today is home for the first of four families in the transitional home.

They will remain there for up to 18 months and rely on a support team including a case manager, social worker and others. 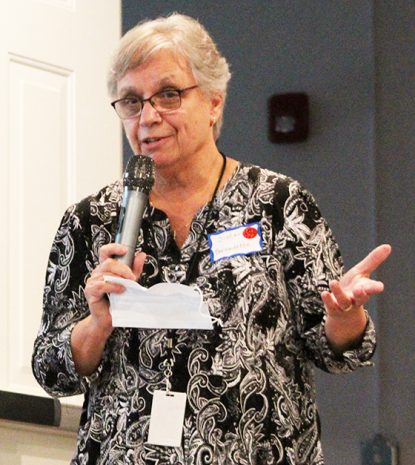 “We will give them all the support they need to get them back on their feet,” said Sister Bernadette Dougherty, S.S.J., executive director of St. Mary’s. “We hope to help them break the cycle of poverty.”

Key to that process is education, so during their year and a half in the home, the women are expected to pursue education “in a field where they can sustain themselves,” said Sister Bernadette.

Whether they are studying health care, technology or cosmetology, the women pursuing a degree or certification will become higher income earners.

“Then they can get an apartment with the money they have saved here,” she added.

Meanwhile five families continue to utilize the emergency shelter for up to eight weeks in the former convent – the chapel repurposed as office space for staff.

The shelter offers each family one bedroom, and the residents share a communal bathroom, living space and dining room.

“It’s absolutely beautiful,” said Sister Bernadette, who said that when she arrived at St. Mary’s in 2015 she envisioned transitional housing not only as “a beautiful apartment, but beauty for North Phoenixville, with gardens and grass so that (residents) could enjoy the quiet.”

Homelessness is among the challenges facing the gritty neighborhood located on a hill on the north side of French Creek opposite the thriving commercial heart of the borough of Phoenixville, Chester County.

On that north side, St. Mary of the Assumption Catholic Church sits as stately as it has since 1840, alongside humble residences and Good Samaritan Shelter for men, as well as St. Mary’s Shelter for women.

While the Franciscan Sisters who founded it in 1987 have left St. Mary’s, a board of directors and Sister Bernadette and her staff have continued it as an independent ministry with help from faithful neighbors.

From its beginning, St. Mary’s Shelter reached out to the region’s council of churches for support, Sister Bernadette explained. “They said, ‘If you house them, we will feed them,’” she said. 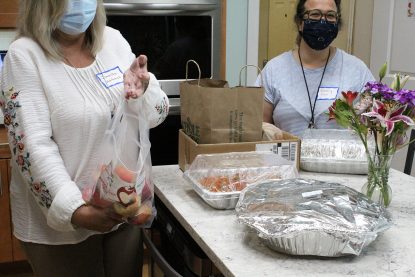 A hot, healthy dinner with all the fixings arrives for the five families residing at St. Mary’s Shelter for up to eight weeks, courtesy of the outreach of religious communities in Chester County — on Sept. 23, from WellSpring Congregation of Chester Springs.

And without fail, every night for three decades St. Mary’s has received food for dinner – more than 345,000 meals — from the hands of parishioners from some 25 faith communities across Phoenixville and Chester County, with a different congregation committing to serving their sisters at the shelter each week.

Last week it was WellSprings Congregation of Chester Springs sending a family-style hot meal, with salad and fresh fruit for the five families of the shelter.

In the transitional housing apartments, residents build self-esteem as they utilize their own kitchen, enjoy their own dining space and at night, retire to private bedrooms and sleep in their own beds – donated by the Franciscan sisters after they had closed a retreat center.

The apartments are the latest expansion of a ministry “to serve people in need” in the Phoenixville area, according to Sister Bernadette, to help them raise families in safety and dignity.

NEXT: Pro-life advocates ‘light in the midst’ of darkness, says archbishop