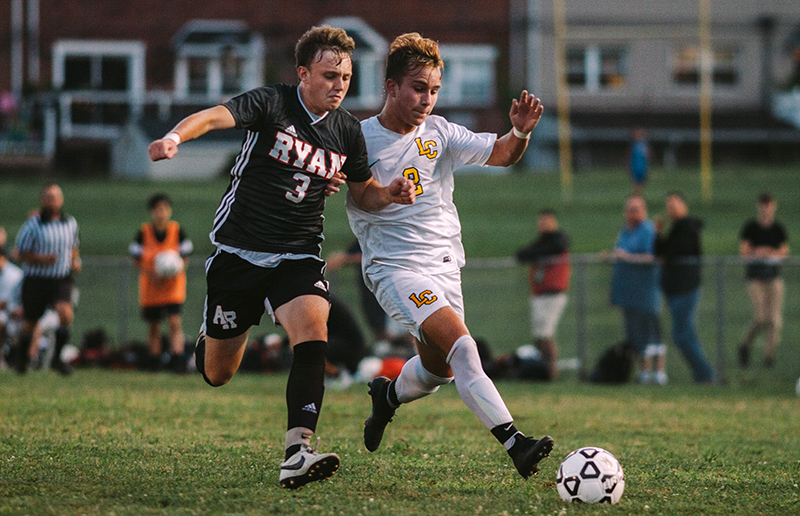 Setting a legacy for excellence at Lansdale Catholic was 2020 grad Jimmy Alff, right, battling for the ball in a game against Archbishop Ryan's Sean Horvay, a 2021 graduate. (Photo courtesy PhiladelphiaSportsDigest.com)

Over the past nine seasons, there have only been five different league finalists. In title contests, La Salle is 5-0, Roman 1-5, Father Judge 1-3, and Archbishop Wood 2-0. The other? Lansdale Catholic, which lost to Judge, 3-1, in 2013.

Though way too early to determine this year’s favorite, it’s safe to say that Lansdale Catholic will be among the PCL’s elite.

“I feel like our identity is being a gritty team with a lot of heart that plays fundamental soccer,” said senior Alex Kulp, who shares captain duties with classmates Eric Fernandez, Jack Edling and Will Kelly. “The past few years, we haven’t been able to make it as far as we would like in the PCL playoffs. We are definitely looking to change that this year.

“I’m very optimistic and have a lot of faith that our younger guys will step up in big moments, and I’m excited for the opportunity to play in a PCL that has many quality teams this year.”

The Crusaders opened with a hard-fought 1-0 loss to Father Judge. They rebounded nicely, defeating Cardinal O’Hara, 8-0. Today, Sept. 17, will be another rugged test when they take on Archbishop Ryan.

“What makes the group of young men that I have the privilege of coaching especially unique is their commitment to making this team feel like a family,” said Farrell. “Whether it’s their constant pursuit of making every teammate feel like he’s contributing, to something as simple as planning team dinners and outings.

At a preseason captains’ meeting, the coaches discussed “team rules” and the consequences for minor infractions such as missing or being late for practice, forgetting to fill water jugs, etc.

Farrell then asked if there were any other rules that should be applied. What occurred next startled him.

“One of the captains simply said, ‘Toxicity,’” said Farrell. “I asked him to elaborate, and he went on to explain that there was no room on this team for negativity and that anything even resembling it would need to be addressed immediately via a team meeting.

“Basically, he wants our team to win, but not at the cost of his teammates’ desire to be a part of that success. I could not have been prouder of him. And it is what I think makes this team more unique than most.”

In a pandemic-shortened season last fall, the Crusaders finished 7-3, including a rare 3-1 victory over Roman Catholic. In 2019, LC posted an 11-5-1 overall record, losing 1-0 to Archbishop Wood in the quarterfinals. The Crusaders then won a District 12 title and advanced to the state quarterfinals.

As for this season, the road has just begun.

“This is the deepest roster that LC has had in years,” said Farrell. “Not only are more than half of our starters from last year’s team returning, but we have many younger players who have really stepped up and shown the coaching staff that they are more than ready to contribute ahead of expectations.

“Beyond that, the majority of our players are position-less. I can put them almost anywhere on the field and feel comfortable that they will be able to do their job to help their team win. Luckily for me, their egos do not get in the way. They just want to help in whatever way they can, at whatever position that ends up being.”