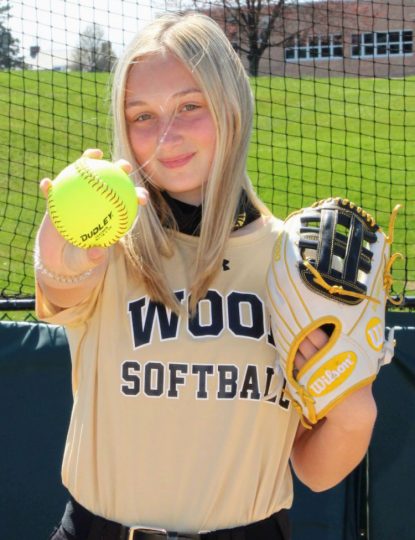 The ball didn’t hit the ground. It landed in the glove of Archbishop Wood’s Dakota Fanelli. But the umpire saw it differently, and a corresponding tying run in the bottom of the sixth inning ultimately pushed the contest into extra innings, where the Vikings’ softball season came to a brutally difficult and infuriating end.

This was back on June 7 in the first round of the PIAA Class 4A state playoffs against powerful Bethlehem Catholic, a 3-2 loss that never should have occurred. Despite a ridiculous rash of injuries, the Vikings had meticulously improved throughout the season, finishing fifth and advancing to the Catholic League semifinals, where they lost a high scoring affair against eventual champion Archbishop Ryan.

Then they advanced to states, only to have a blown call turn a Mona Lisa into a runny watercolor.

Though the loss still annoys Fanelli, the alum of Warminster’s Nativity of Our Lord School mentally and emotionally moved on and immediately started focusing on preparing for next spring.

“I could get mad, but anger only gets you stuck,” said Fanelli, now a junior. “I use moments like that to drive me.”

That explains why throughout the summer, the 16-year-old trained and faced rugged competition in travel ball. After all, Catholic League softball is a mere … seven months away.

As one of the league’s best pitchers and hitters, Fanelli relishes her multi-faceted role as part performer, part leader, and part cheerleader.

“I am constantly working and trying to improve my game,” said Fanelli. “Depending on the day, I’m working on pitching, fielding, hitting, or working out in the gym. My travel team and I live by the saying ‘no days off’ because we all want to be the best at what we do, and the only way to do that is to make sure you are working on your game constantly.”

In 34 Philadelphia Catholic League innings, Fanelli amassed a 3.29 earned-run average. Overall, she struck out 64 hitters. Among her top feats was a brilliant four-hit, 10-strikeout masterpiece in a PCL quarterfinal victory over three-seed St. Hubert. At the plate, Fanelli’s .575 batting average was among the top five in the league.

Ardent Archbishop Wood coach Jackie Ecker, who successfully offset her squad’s myriad of calamities with a “next player up” approach, can’t wait to discover what awaits her All-Catholic hurler.

“Dakota’s work ethic is unbelievable,” said Ecker. “Her leadership on the mound gives her teammates an added boost. She strives every day to get better, and I see great things happening on the softball field in the future.” 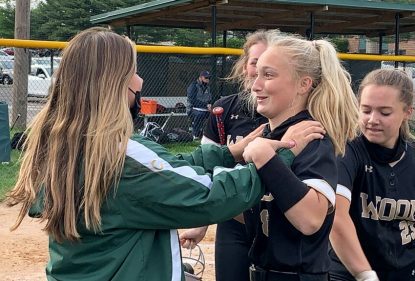 Dakota Fanelli (right) is embraced by teammate Abby Windish after scoring a run in softball victory. (Photo by John Knebels)

“Coach Jackie makes decisions based on the best interest of the entire team,” said Fanelli. “It might not always be the popular decision, but it is what is best for everyone. This past season was one of my all-time favorites. She pushed me outside my comfort zone and challenged me to be my best.”

Much to the chagrin of Fanelli’s opponents.

In the aforementioned quarterfinal win, for instance, Fanelli worked out of an early first-inning jam and flummoxed a potentially lethal St. Hubert lineup. Bambies coach Dan Milio could only applaud Fanelli’s lights-out performance.

“Dakota was best pitcher we faced this past season,” said Milio. “She kept us off-balance and used the entire plate with her variety of pitches. She competes hard and keeps her team in the game. I look forward to competing against her next two seasons.”

Julia Yogis, a sophomore infielder, outfielder, and catcher, endured her share of injuries last spring. She was able to watch Fanelli from both the field and the bench.

“Aside from being my teammate, Dakota is one of my closest friends,” said Yogis, a graduate of Warrington’s St. Joseph-St. Robert School. “She is a sweet and caring person and an incredible softball player.

“I look up to her. She is an incredible leader and always knows what to do. When things get rough, she knows how to calm everyone down and get our heads back in the game. Aside from her leadership and skill, Dakota is so fun to play with. Her ability to make me smile or laugh on and off the field is undeniable.”

A major benefit of playing a sport, said Fanelli, is that it “gives you skills that you’re going to need in life. It teaches you how to be a leader, work with others, handle difficult situations, and about commitment.”

Fanelli’s faith journey has helped shape every aspect of her life – academically, athletically, and socially.

“For kindergarten through third grade, I went to public school,” said Fanelli. “In fourth grade, my parents moved me to Nativity of Our Lord because a faith-based education was important to them.

“I am so thankful that they made the move. My Catholic education has helped shape me. I believe God has a plan for each of us. He has given us all unique talents, and it is our responsibility to use them for good.”

Though there remains much to do over the next two seasons, Fanelli has envisioned her future ambitions.

“College is definitely on my radar,” she said. “I would love to major in physical therapy. I most definitely have a goal of playing in college, and it would be an honor to play in any division if I get the chance. I am definitely looking at more local schools since I have three younger sisters, and I want to be part of all the amazing things they do.”

And to the umpire who ruined her sterling effort … no hard feelings.

NEXT: Lansdale relying on selflessness, personal accountability for soccer success