‘Boot Up Philly’ gives leg up to hundreds in need 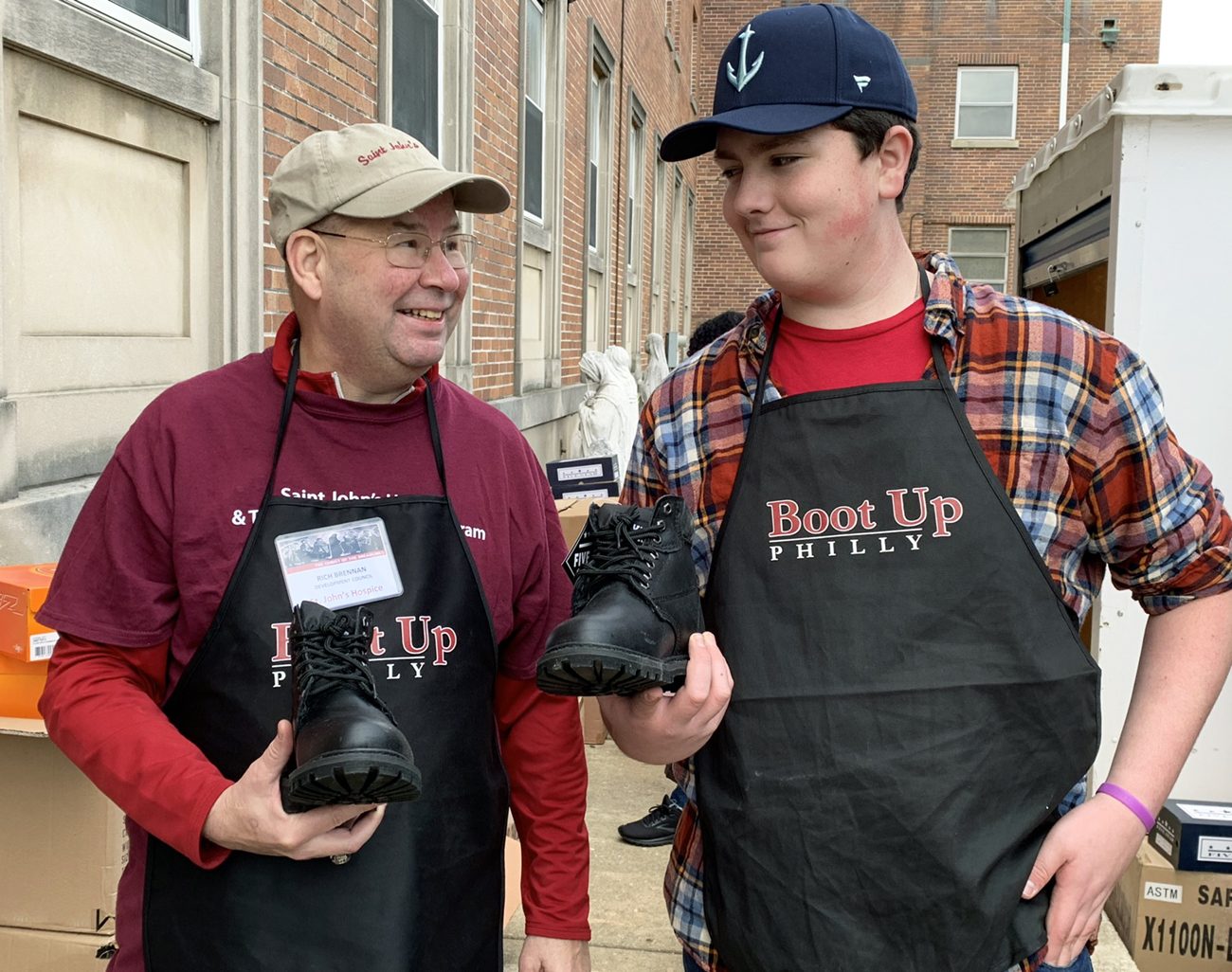 Volunteers display footwear distributed at an Oct. 23 community giveaway that capped "Boot Up Philly," a donation drive launched by St. John's Hospice, part of archdiocesan Catholic Social Services, to bring footwear and other necessities to those on the streets. (Gina Christian)

An initiative to provide footwear for those in homelessness has given a leg up to hundreds of individuals in need.

On Oct. 23, St. John’s Hospice (SJH), a ministry of archdiocesan Catholic Social Services (CSS), capped its “Boot Up Philly” donation drive with a community giveaway at the Archdiocese of Philadelphia’s Pastoral Center, adjacent to the Cathedral Basilica of SS. Peter and Paul.

Along with over 500 sets of boots, socks and undergarments, some 50 archdiocesan staff and volunteers distributed free food, personal care and feminine hygiene items, and 300 coats specifically designed for – and by — those in homelessness.

Launched last month, “Boot Up Philly” sped past its target goal of $35,000 to raise at least $99,000, and the Oct. 23 giveaway expanded to include participants from CSS’s family service centers, archdiocesan Nutritional Development Services (NDS) and members of the Order of Malta, an international Catholic lay religious order that witnesses to the faith through medical, social and humanitarian aid.

Lines for the event were “well around the corner” an hour prior to the start, said Amy Stoner, director of CSS’s community-based, housing and homelessness services division, of which SJH is a part.

Located in Philadelphia, SJH offers an array of crucial supports to men experiencing homelessness in the city’s downtown neighborhood, providing more than 300 meals to its residential and day guests, as well as case management, on-site nursing, daily showers and a mail room. A beneficiary of the Catholic Charities Appeal, the facility also annually houses some 250 men transitioning from homelessness to independent living.

While SJH is actually named for St. John the Evangelist, the “Boot Up Philly” campaign’s practical approach was inspired by St. John Neumann, the beloved Philadelphia saint after whom the drive was modeled.

Known for his extreme self-sacrifice and generosity to the poor, the fourth bishop of Philadelphia once joked the only way he could change his shoes was by putting the right one on the left foot, since he had just a single pair. 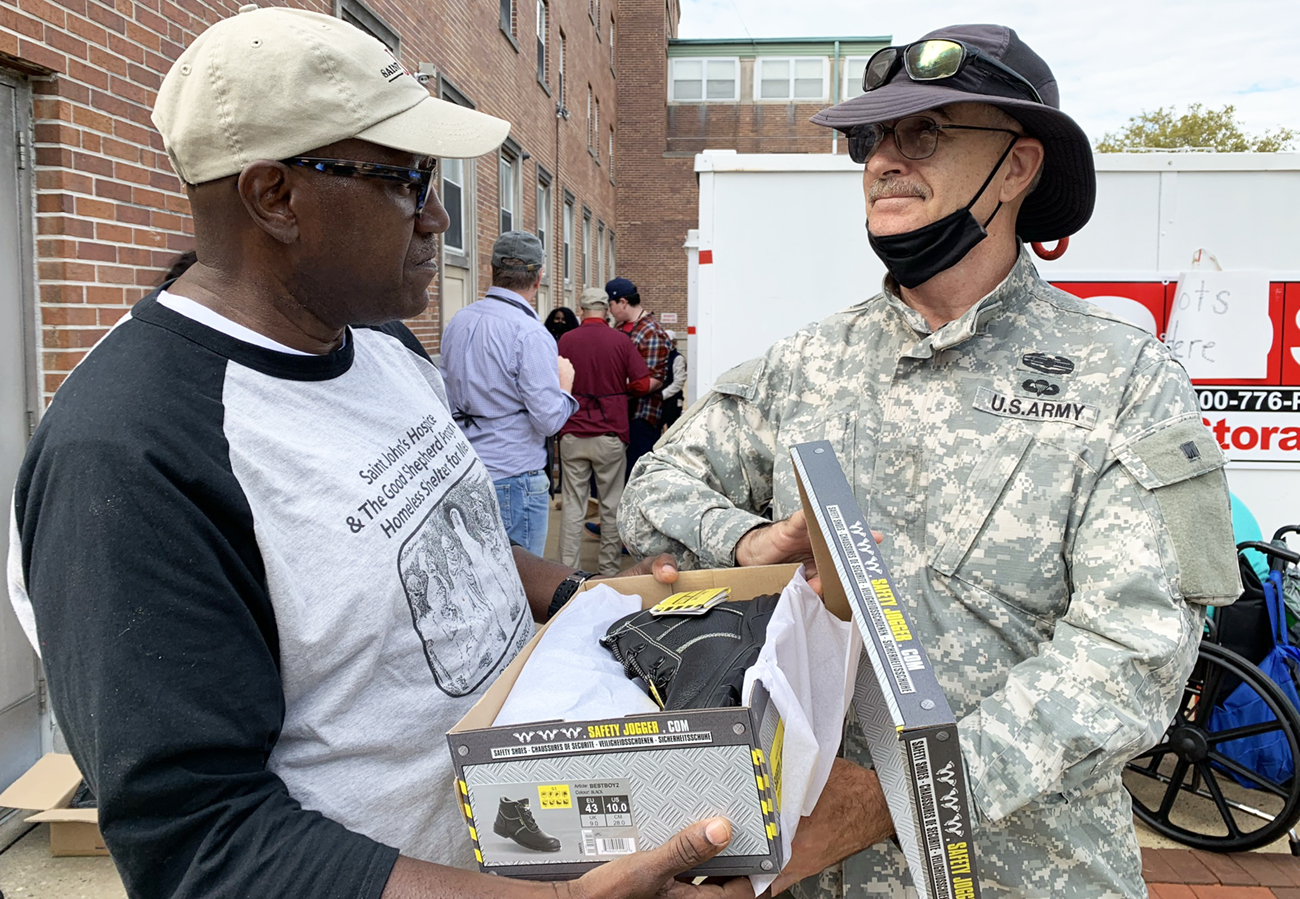 A tireless missionary and evangelizer, St. John Neumann also logged hundreds of miles over difficult terrain, often on foot – and could well sympathize with the painful ailments SJH’s clients can face due to inadequate footwear.

That’s a reality all too familiar to 60-year-old Mark, a Navy veteran who received a pair of boots at the Oct. 23 giveaway.

Homeless for the past two years, Mark said he currently walks “five to 10 miles every day,” and knows from both his current and military experience that “feet are very important.”

“You’ve got to take care of them,” he said. “You need to change your socks, because you can easily get an irritation that turns into an infection.”

In addition, those living on the streets often experience tactile impairment, which is why the coats distributed at the giveaway featured fabric fasteners, rather than buttons or zippers, said Robert Macri, a CSS board member and the regional hospitaller for the Order of Malta, which donated the outerwear.

“(We) designed a coat specifically for the homeless, with input from homeless folks,” he said. “They’re waterproof, nylon, quilted, with a lining and a hood. They’re very easy to put on, and one size fits all.”

Clients of the Oct. 23 distribution were “thankful and grateful” for some much-needed material assistance, said Beth Wood, administrator of CSS’s Northeast Family Service Center in the city’s Mayfair section.

“We saw a lot of pregnant women in homelessness, with young children,” said Wood. “Just (to) … get diapers, clothing, car seats, cribs, a pair of underwear, a feminine pad, socks, hats, boots  — necessities we take for granted.”

Wood said she was also able to connect clients with CSS’s range of resources for pregnancy and parenting.

The compassion that marked the Oct. 23 giveaway was reassuring, said Mark, adding, “This feels like extended family.” 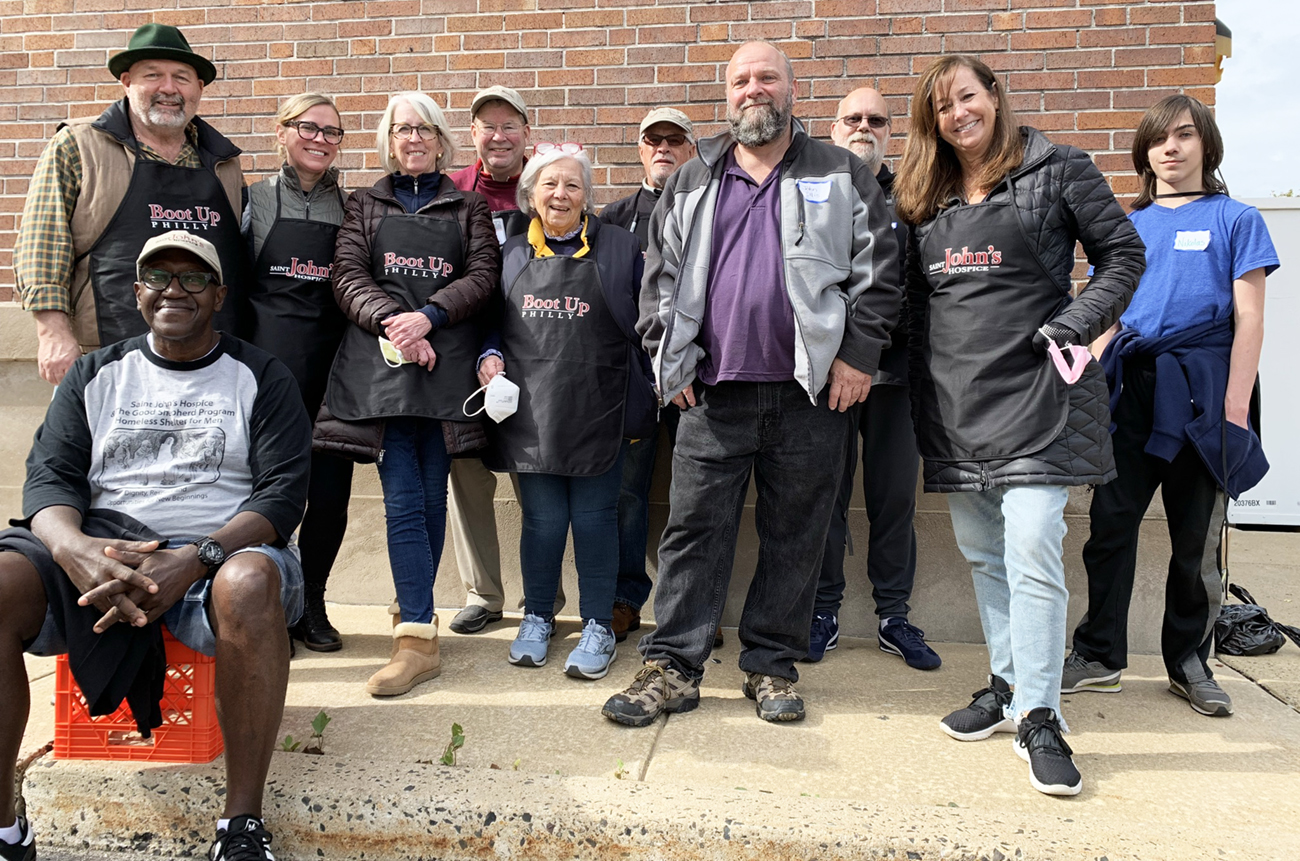 Staff and volunteers from St. John’s Hospice gathered for a photo after serving hundreds of clients at an Oct. 23 community giveaway that capped the ministry’s “Boot Up Philly” campaign. (Gina Christian)

NEXT: Superintendent of Catholic high schools to step down Nov. 5