Superintendent of Catholic high schools to step down Nov. 5 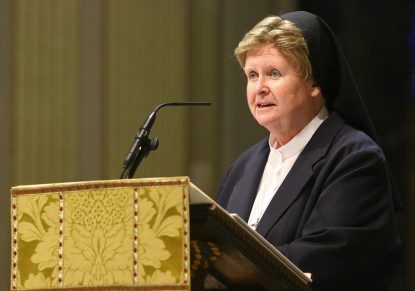 Sister Maureen McDermott, I.H.M., speaks during a Mass marking the end of the academic year in June 2020. The archdiocesan superintendent of secondary schools will resign from her position Nov. 5, 2021, it was announced Oct. 29. (Photo by Sarah Webb)

Auxiliary Bishop Michael Fitzgerald, who oversees Catholic education in the archdiocese, wrote in a letter Oct. 29 that Sister Maureen had already shared her intention to step down but her decision to resign at this time “was made due to health circumstances and came after much careful thought and prayer.”

With a career in spanning some 40 years, she has left “a deep and lasting impact on Catholic education,” the bishop wrote, in which thousands of students and alumni of Catholic schools “have benefited from her leadership and commitment.”

Sister Maureen has been associated with Catholic education her entire life. A product of St. Gabriel School in South Philadelphia where she first encountered the Sisters, Servants of the Immaculate Heart of Mary, and on to Archbishop Prendergast High School for Girls, she graduated from Immaculata University in 1978 with a bachelor’s degree in English.

A year later she entered the I.H.M. order, and after professing her vows, engaged in the order’s charism for Catholic education. She first taught in elementary school classrooms beginning in 1982 then in Catholic secondary schools.

Along the way she earned a master’s degree in English from West Chester University and a Ph.D. in Catholic educational leadership from Fordham University.

In 2001 she was named principal of Bishop Shanahan High School in Downingtown, Chester County, in which she served for 14 years until rising to lead the entire Catholic secondary school system as superintendent in 2015.

(See a CatholicPhilly.com story by Lou Baldwin of the appointment at that time.)

Since then she has overseen a system that has invited broad collaboration through the efforts of Faith in the Future Foundation, stabilized the rate of school enrollment decline, grown partnerships with Catholic colleges, faced the challenges of two high school closures and the immense difficulties with continuing Catholic education during the disruptions of the COVID-19 pandemic.

He cited year-over-year increases in the value of college scholarships earned by Catholic high school students as well as “innovations to academic offerings and instructional methodology for all of our schools.”

“She has been a key advocate for technological advancement, professional development and unique partnerships with local colleges and universities. All of those efforts have already born great fruit.”

He called Sister Maureen “a critical force” in the archdiocese’s COVID-19 response “that resulted in continuous learning for all students.”

“That unbroken stream of instruction was due in large part to her work with the implementation of a universal learning management system and increased professional development for our teachers,” Bishop Fitzgerald wrote.

Identifying interim leadership for the secondary school system will be the immediate work of the Office of Catholic Education, followed by an extensive national search for a new superintendent.

In the meantime Bishop Fitzgerald called for prayers of thanksgiving to God for Sister Maureen’s service and the “indelible” mark she has left on Catholic education in the archdiocese.

He also sought “the intercession of Mary, our Mother, for the preservation of her health.”

PREVIOUS: ‘Boot Up Philly’ gives leg up to hundreds in need

NEXT: Far and near, missionaries proclaim Christ with joy