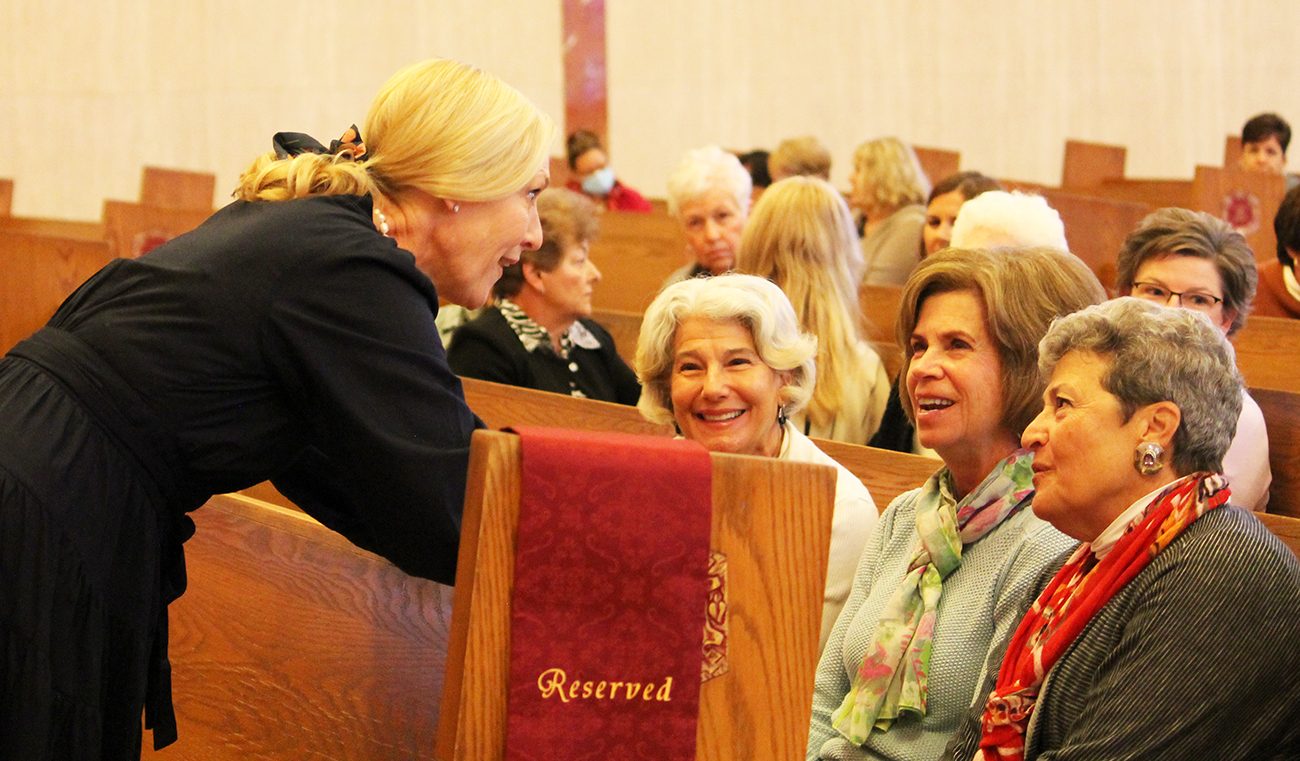 Morning keynote speaker Lisa Brenninkmeyer, creator of the popular "Walking With Purpose" Bible study program for women, speaks to attendees before her talk at the women's conference. (Photo by Nicky Verna)

More than 700 women attended the Archdiocese of Philadelphia’s Catholic Women’s Conference held Saturday, Oct. 23 at the National Shrine of Our Lady of Czestochowa in Doylestown.

“It’s good to be back again after a two-year hiatus,” said Meghan Cokeley, director of the archdiocesan Office for the New Evangelization.

(See an extensive gallery of photos from the event.)

This year’s event was modified due to continued pandemic limitations. To keep crowd sizes smaller, conferences in English were offered to women in either or both two-hour, in-person mini conferences – morning and/or afternoon. The women could then enjoy four video talks at home at their leisure.

The Spanish Track for the conference was offered at a different location, Holy Innocents Parish in Philadelphia.

Lisa Walmpler, a parishioner at St. Agnes Parish in West Chester who entered the Catholic Church last Easter, was excited to be attending her first Catholic Women’s Conference along with her RCIA teacher, Mary Ann Corcoran, who was also attending the conference for the first time.

“We came to see Lisa,” said Walmpler, referring to the morning’s keynote speaker, Lisa Brenninkmeyer, author of the “Walking with Purpose” Catholic women’s Bible study program, which she started in 2002.

Brenninkmeyer, a convert to Catholicism herself, noticed a lack of Catholic Bible studies to meet the needs of young mothers like herself. She started a Catholic Bible study in her local parish, which later evolved into the “Walking with Purpose” Bible study program, which is now active in more than 460 parishes in the United States, Europe and Canada.

Walmpler said she and Corcoran both participate in groups that use Brenninkmeyer’s “Walking with Purpose” program. 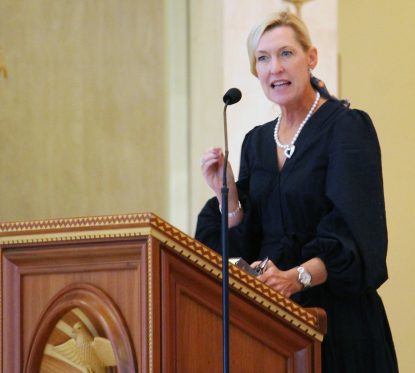 Keynote speaker for the morning session of the Women’s Conference, Lisa Brenninkmeyer, makes a point during her talk. (Photo by Nicky Verna)

Joanna Solomon experienced “a heart transformation” while participating in her first “Walking with Purpose” Bible study, called “Discovering Our Dignity,” which left her “hungry for so much more,” she said.

Now a facilitator for “Walking with Purpose” at her parish, St. Mary Magdalen in Media, she said the program helped her to discover a personal relationship with God for the first time in her life.

Solomon also formed “more gently and honestly a relationship with myself,” she said, “uncovering the lies I believed about myself for years, and this cascades into better relationships with my loved ones.”

“We women miss getting together,” said Brenninkmeyer, standing in the church vestibule shortly before giving her keynote speech. “We weren’t meant to journey alone. It’s important to know you’re not alone.”

Brenninkmeyer, who had been booked to speak at last year’s event that was cancelled due to the pandemic, had to leave this year’s conference soon after her talk to return home to St. Augustine, Florida, where she lives with her husband and seven children, because it was her daughter’s high school homecoming dance that evening.

She began her talk to about 500 women attending the conference’s morning session by mentioning the pandemic and its restrictions over the past 18 months. “I wonder how many of you have felt loneliness like never before,” she asked, “and that the isolation wasn’t good for you?”

Brenninkmeyer referred to Jeremiah 17:7-8, about trusting in the Lord and the tree that sends out its roots to a stream, is not anxious in the year of drought, and continues to bear fruit. She encouraged women in the audience to be a “woman who sends out her roots deep and be fruitful wherever she’s planted.”

“Remember back in March 2020,” she said, “when things first slowed down. We felt like we needed to get off the gerbil wheel. But when things slowed down, not everything got better.  Some things bubbled to the surface.”

“This is feeding women’s anxiety and depression instead of relieving them,” she said. “Most of us are not sure how to fix what’s wrong with our lives. Normal is not something we can count on, so we need something more.”

“We’re at a crossroads,” said Brenninkmeyer. “You have more choices than you think, but we need to make the right choices. What if we could build lives we don’t want to escape because life is good? What if we are strong and beautiful, instead of exhausted and distracted?”

She talked about how the ideal of beauty has changed dramatically over time, and that it’s “always something just out of our reach, so we’re set up for failure.”

Brenninkmeyer encouraged women to open their hearts and be present in the Eucharist during adoration so to become more Christ-like “in the gaze of Jesus. God delights in you, and you are not a mistake. He says, ‘You are my masterpiece.’”

She also pointed out “the enemy” who wants women “striving after an unattainable beauty, and he knows once you attain it, you won’t be satisfied. You need to choose which perspective to live by. Most people adopt the most popular world view, and they’re adopting the world view of the enemy,” she said.

Brenninkmeyer talked about how many in our culture are gravitating to the concept of postmodernism, which involves a radical reappraisal of modern assumptions about culture, identity, history, or language. She called it a mindset where “nobody stands out and everyone is acceptable…. God is ignored, there’s no such thing as absolute truth, feelings reign, individualism (prevails) … and there’s nothing making sense of the world.  It’s a recipe for despair, confusion and anxiety.”

“The alternative,” she said, “is looking through a Christian world view where there’s community, a grand narrative, and the overarching story makes sense of life. This is why the church is so important in a world dominated by lies.”

There is work involved for Catholics, Brenninkmeyer suggested. “You’re going to have to study and engage your mind, challenge which world view you’re looking through. Deciding to live a Catholic life is deciding to live counter culturally.”

“There are answers to our core questions. We are not alone, but we need to wake up to who we are being called to be,” she said in closing.

In the afternoon Mother Clare Matthiass, C.F.R., gave a keynote talk on “The Strength and Beauty of God.”  She is mother superior with the Franciscan Sisters of the Renewal in East Harlem, New York City and author of the book “Discerning Religious Life,” as well as the Avow small discussion group discernment program.

NEXT: Ministry meets moms, babies where they’re at with what they need