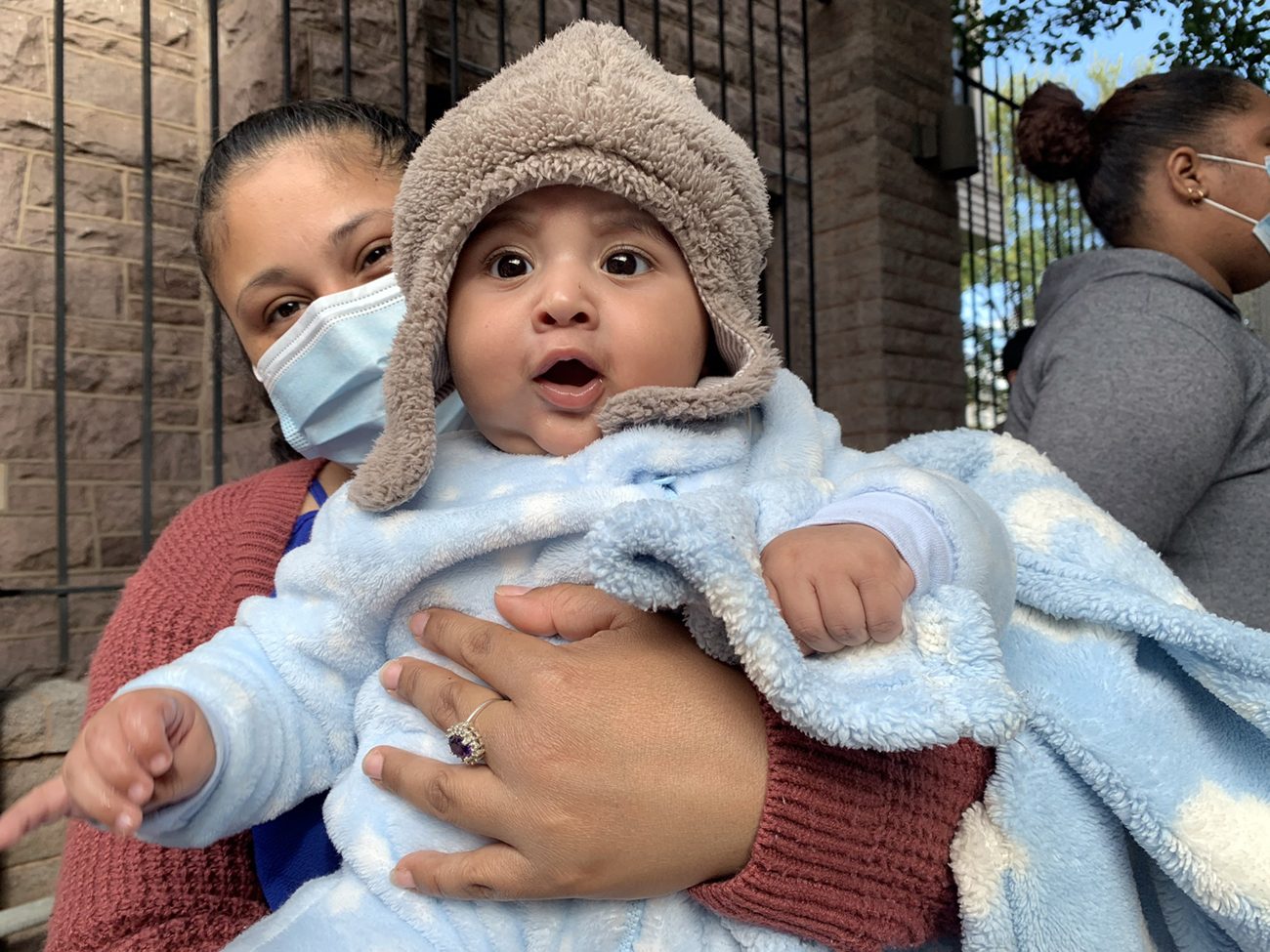 A mother and her infant attend the Oct. 18, 2021 blessing and dedication of The Cenacle, an outreach to pregnant women, new parents and families located at the Padre Pio Prayer Center and sponsored by archdiocesan Catholic Social Services and the Pro-Life Union of Greater Philadelphia. (Gina Christian)

A new archdiocesan outreach is helping moms and babies, while creating a space where “God can once again dwell with his people, and his people with him.”

On Oct. 18, Philadelphia Auxiliary Bishop John McIntyre blessed and dedicated The Cenacle at the Padre Pio Prayer Center in the Frankford section of Philadelphia.

The ministry, which serves pregnant women, new parents and families, is a collaboration among archdiocesan Catholic Social Services (CSS), the Pro-Life Union of Greater Philadelphia and the Capuchin Friars of the Padre Pio Friary. Representatives from all three partners, along with several Sisters of Life and various supporters, were among the 60 on hand for last week’s blessing.

With a large multipurpose hall, food and diaper pantries, and a brand-new laundry room, The Cenacle provides pregnancy and parenting education, material aid, health information and workshops. In addition to CSS staff, the Sisters of Life and the Capuchin Friars are also regularly on hand at the outreach.

That aid “puts flesh on the bones of the church’s commitment to life and the dignity of all persons,” said Bishop McIntyre. “To care for moms, and to help them care for themselves and their children, is a great work.”

The ministry’s name speaks to its mission, he added.

The Cenacle (from Latin cena, “dinner”) was the upper room in which the Last Supper took place, and in which the Apostles, Mary and the first community of believers awaited the coming of the Holy Spirit. The site is also regarded as the location of Jesus’ Resurrection appearances to the frightened Apostles. 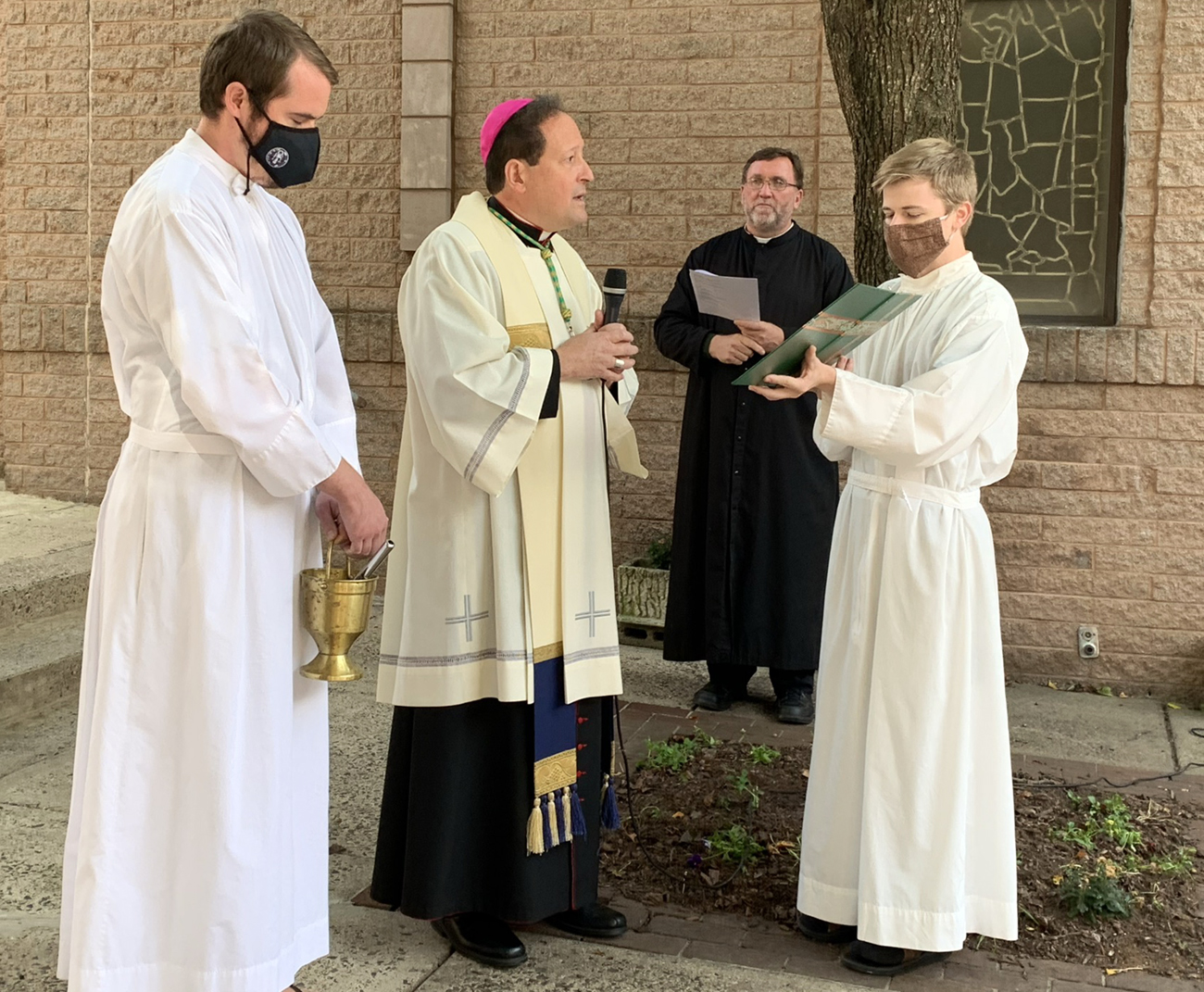 Philadelphia Auxiliary Bishop John McIntyre (center) dedicates The Cenacle, a mother-baby ministry located in the city’s Frankford section. The outreach is sponsored by archdiocesan Catholic Social Services and by the Pro-Life Union of Greater Philadelphia, whose board chair, Father Christopher Walsh (second right) was also on hand for the Oct. 18 ceremony. (Gina Christian)

In that upper room, “a place of fear and doubt and confusion … God took the initiative,” sending the Spirit to break “the awful chains of fear” and empowering the disciples to witness to the Gospel, said Bishop McIntyre.

The Cenacle in Frankford is a sign that “through the church, God moves,” said the bishop. “Women who come here seeking assistance at a very critical and crucial moment in their lives are given that help in many and varied ways.”

“When a woman finds herself in a pregnancy she’s not ready for, she’s weighing her options, and obviously one of the things she asks is, ‘Will I have a support network to help me when the birth happens?’” he said. “This is a way to say, ‘We’ll do our best to help you. We’ll be your friend, not up until you have the baby, but while you’re watching your baby grow in his first years of life.’”

Poverty and lack of sufficient resources are key drivers for women who seek abortions. According to the Guttmacher Institute, 75% of U.S. abortion patients are from low-income poor households, with 53% of them Black or Hispanic. Some 59% already have at least one child.

By helping women to navigate their first few years of motherhood, The Cenacle counters claims that pro-life advocates are merely “pro-birth,” said Father Christopher Walsh, pastor of St. Raymond of Penafort in Philadelphia and chairman of the Pro-Life Union of Greater Philadelphia. “This (is) holy ground where amazing things are happening.”

Back in June, CSS was named Pennsylvania’s “Service Provider of the Year” by Real Alternatives, a non-profit, charitable organization in the Commonwealth of Pennsylvania that administers pregnancy and parenting support services. The accolade was the ninth consecutive one for the agency. 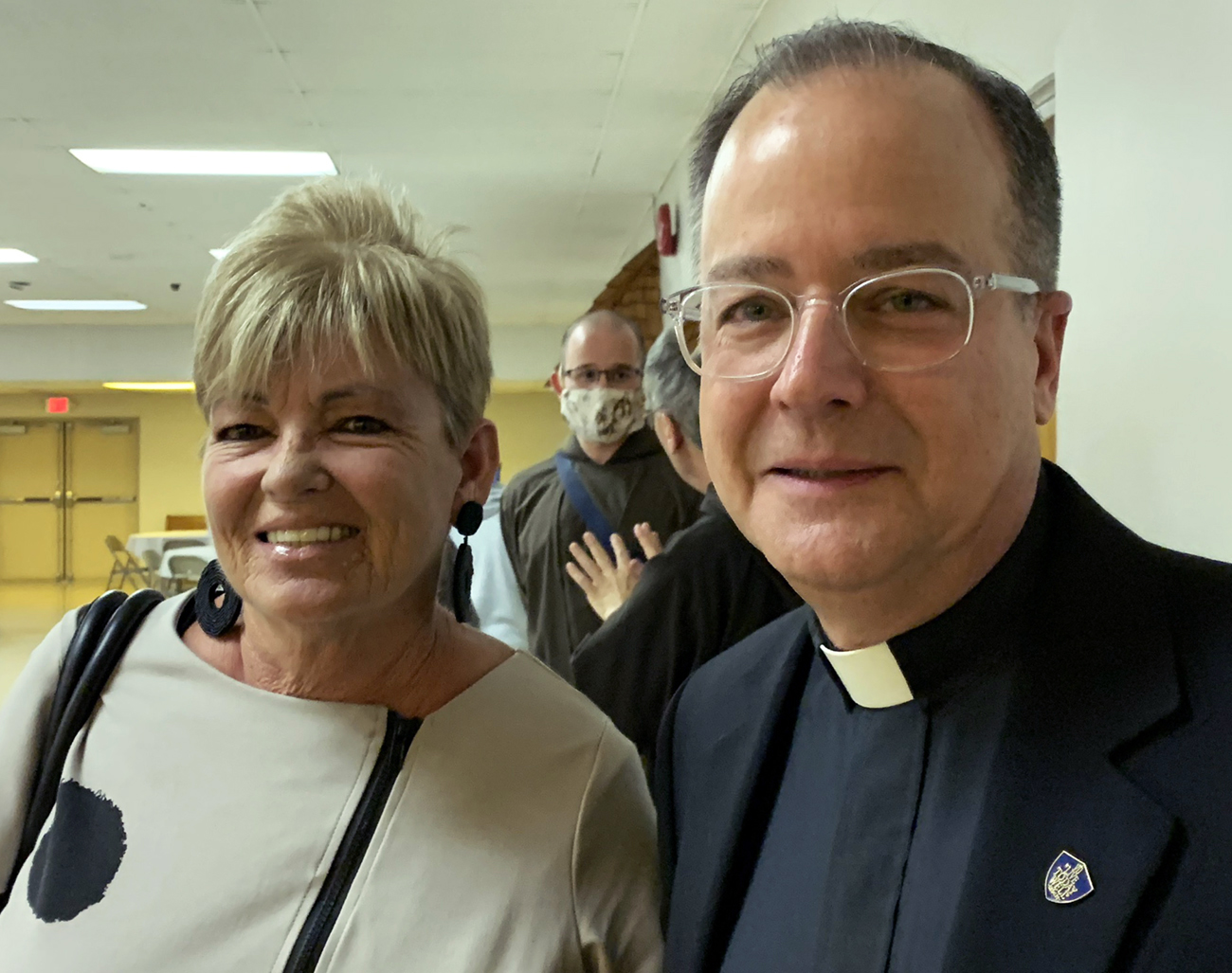 “There aren’t too many programs within this area,” she said. “We’re close to the Market-Frankford El. … We have clients from South Philadelphia. They can just hop on a train and come to the center.”

Parent educators from The Cenacle are on site weekly at nearby Jefferson Frankford Hospital, she said, while colleague Amy Cantwell works at St. Helena Parish in the city’s Olney section and at St. Joan of Arc, part of Holy Innocents Parish in Philadelphia.

Over the decades, CSS has increasingly shifted to meet clients where they live, said Stoner.

While still pastor of the former St. Joachim Parish (whose buildings were ultimately sold to the Capuchin order to create the Padre Pio Prayer Center), Father Bazzoli took public transportation for a meeting with Stoner at CSS’s Northeast Philadelphia location — and arrived half an hour late.

“It educated me to the realities our clients faced,” said Stoner.

The transformation of the former St. Joachim into a renewed Catholic ministry has been both “a great gift and kind of humbling,” said Father Thomas Higgins, pastor of Holy Innocents Parish, with which St. Joachim merged in 2013.

“How appropriate The Cenacle is here at the former St. Joachim Parish, named for the grandfather of Jesus,” he said. “It’s one of those goosebump moments.”

And one he himself couldn’t necessarily have foreseen, he admitted. 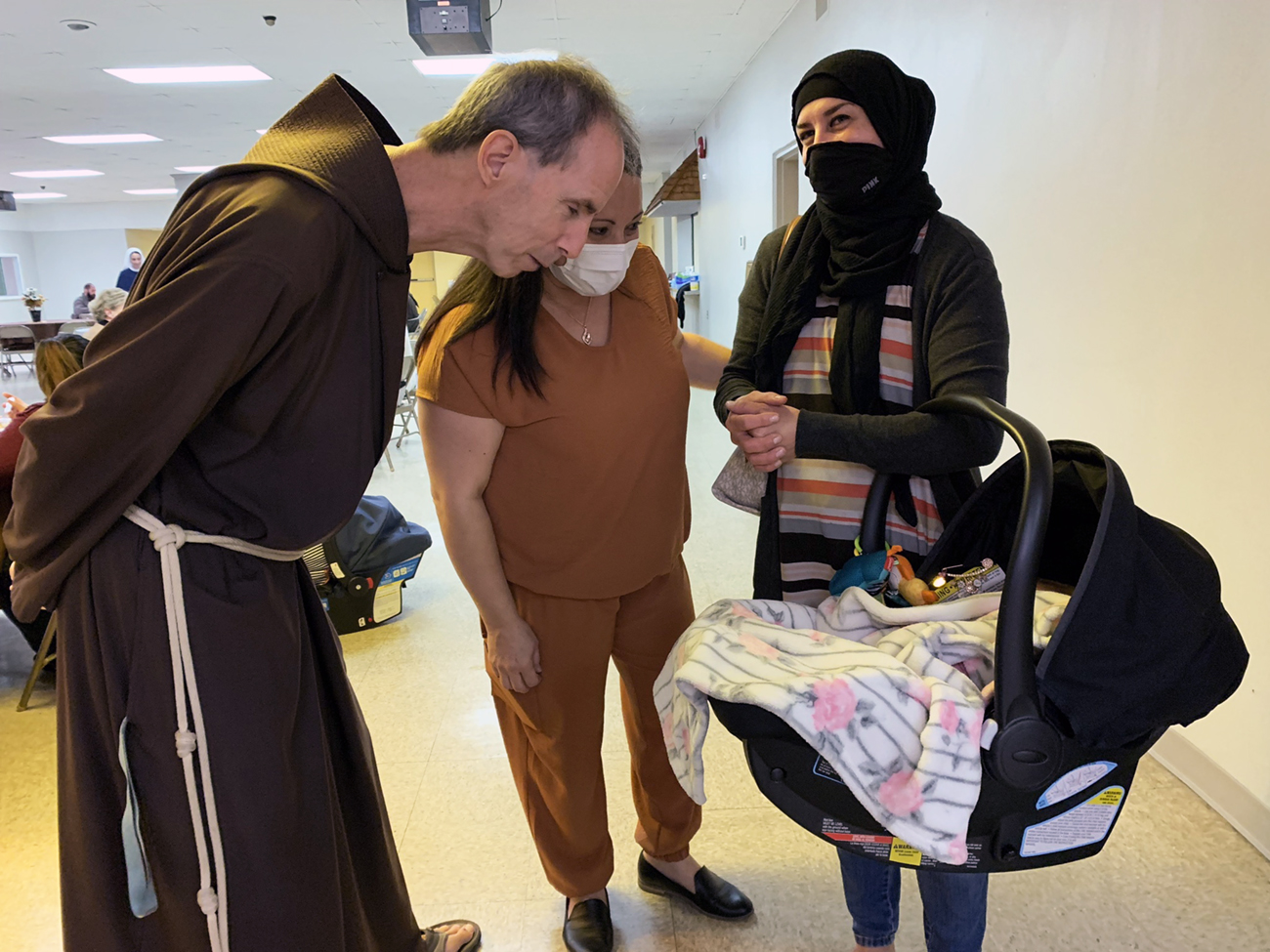 Capuchin Father Kevin Thompson, director of the Padre Pio Prayer Center in Philadelphia, greets a mother and baby who are clients of The Cenacle, a new ministry at the center sponsored by archdiocesan Catholic Social Services and the Pro-Life Union of Greater Philadelphia, and directed by Wendy Rodriguez (center). (Gina Christian)

NEXT: Catholic foster care ‘back 100%’ after Supreme Court decision