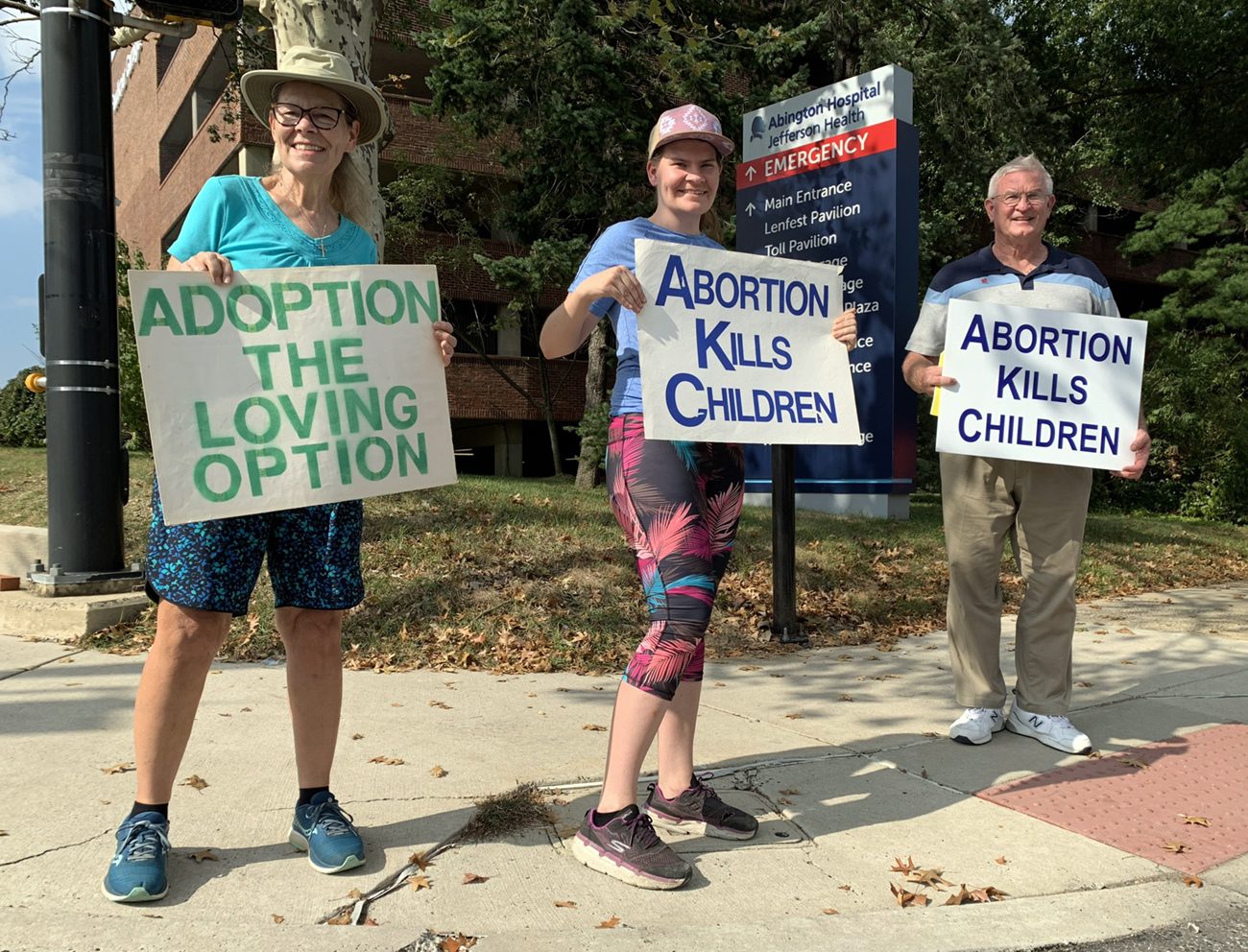 More than 230 local pro-life advocates recently gathered as part of a cross-country “human chain” of support for the unborn.

“We’ve been here every first Sunday of the month for about 35 years,” said Patrick Stanton, a board member of the Pro-Life Union of Greater Philadelphia, who joined approximately 130 fellow attendees in front of Abington Hospital.

Some 14 years after the Roe and Doe decisions, the Life Chain initiative was launched by Please Let Me Live, a pro-life ministry based in Yuba City, California. In 2019, approximately 2,000 such chains were formed across the U.S. and Canada, with demonstrations typically on the first Sunday of October, as well as year-round.

Faithful within the Philadelphia Archdiocese were quick to endorse the effort from its earliest days, said Stanton. 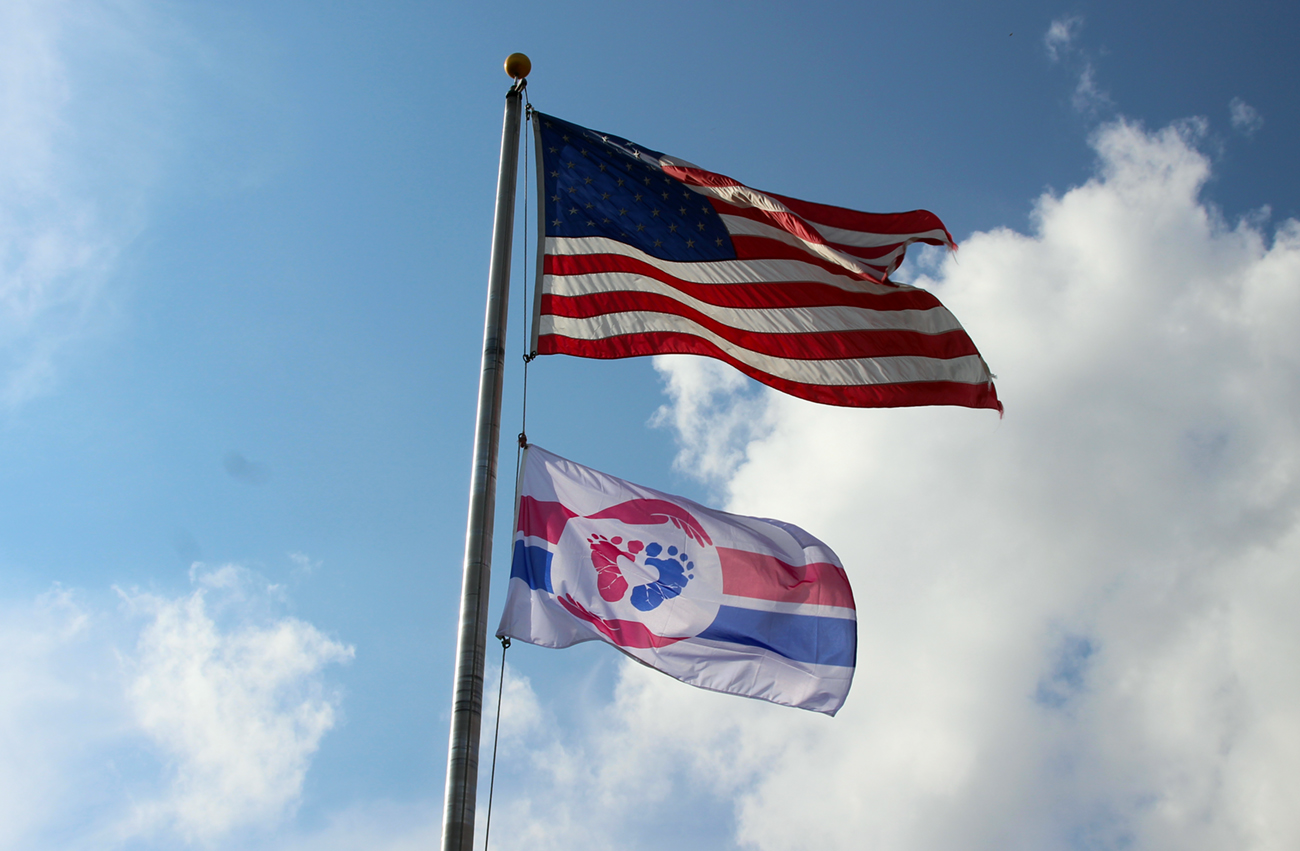 A pro-life flag was unfurled near Abington Hospital during an Oct. 2 “life chain” vigil to defend the rights of the unborn. (Gina Christian)

In Chester County, life chains are nearing their 30th year, said Anne Marie Barr, who organized a group of more than 30 participants outside Assumption of the Blessed Virgin Mary Church in West Grove.

With attendees ranging in age from “two years to senior citizens,” Barr said the group “represented a ‘womb to tomb’” view of the sanctity of human life.

For Joe Rooney, a parishioner at Queen of Peace in Ardsley, pro-life advocacy is a family tradition.

“We had a son born while I was stationed as a Marine in Florida, and one week later we had him out at a life chain,” said Rooney, part of the Abington Hospital vigil. “And then we had my father down here a month before he died in 2016. Between then and now, we’ve been at it for about 30 years.”

Rooney and his wife Beth point to their five children as the inspiration for their pro-life witness – particularly their youngest son, Forte, who was born without a heartbeat or sign of respiration.

“He didn’t breathe for 15 minutes,” said Rooney. “They brought him back through CPR. I felt the spark of life go back into his body while we were praying the Hail Mary nonstop. We have seen what Martha and Mary saw when Lazarus was raised from the dead.”

Now a senior at the U.S. Naval Academy, Forte ultimately showed no impairment, but Beth Rooney said the couple was fully prepared to accept their son might have special needs after his resuscitation.

“It’s just a level of challenge you step up to,” she said. “I don’t know how many people I’ve talked to whose children have Down syndrome or other serious problems, and the parents say, ‘What a blessing these kids have been.’”

Abortion is often a decision based on “convenience,” said Abington vigil attendee Rita Whitaker, executive director of Life Turning Point of Philadelphia, an outreach for homeless women and children set to open in the city’s Germantown neighborhood.

“If they want it, it’s a baby. But if they don’t want it, then it’s tissue,” said Whitaker. “If it’s inconvenient to have the baby, they want to get rid of it.”

Whitaker herself had several abortions while a teen, but later “realized it was a sin” after she “gave (her) life to the Lord,” and she now dedicates herself to aiding abortion-vulnerable women.

That message needs to be sustained not with slogans, but authentic spirituality and an innate respect for life, said 24-year-old Sunny Rooney, who participated with her parents at the Abington Hospital life chain.

A number of high school friends who used to travel to pro-life marches have been “taken over” by a “microwave culture” that prioritizes “instant gratification” over church teaching, said Rooney.

As a result, her friends are “not quite posting pro-abortion stuff, but they’re still not speaking out against it,” she said, noting that peer pressure reinforces the dynamic.

An inability to “take a strong position on pro-life” is widespread among younger generations, even those within the church, said fellow attendee and permanent Deacon John Nucero of Our Lady Help of Christians in Abington.

“We’ve got to get to the point where everyone understands it starts right at conception,” he said.

Joe Rooney said the task was outlined decades earlier by Pope Paul VI in his 1968 encyclical “Humanae Vitae,” which condemned artificial contraception, sterilization and abortion, and described their damaging implications for individuals and society as a whole.

“Pope Paul VI was literally a prophet,” said Rooney, whose family has read the encyclical. “Certainly it’s controversial, but the pill has basically led to all this, the objectification of sex.”

Dan Bowser of St. Joseph Parish in Downingtown said he was “encouraged” to see “new faces,” including “a lot of young adults,” in his group’s life chain of about 60.

The Abington and West Grove vigils prompted dozens of supportive honks from passing motorists, and Stanton said pro-life advocates are “making inroads” through ongoing dialogue with Abington Hospital, whose board by state law holds at least one annual public meeting.

“When we found out they were doing abortions, it was 350 a year. They’re at 118 now,” he said. “We found out one year half their abortions were Down syndrome children, and we have been bringing moms and their children with Down syndrome to these meetings, trying to change the policy to regard the sanctity of life.”

A woman with disabilities happened upon the Warminster life chain near Nativity of Our Lord Parish, and quickly parked her vehicle near the church to add her prayers for “a very good cause,” said coordinator Maria Woods.

Joe Rooney – who unfurled the new pro-life flag at the Abington gathering – said the issue of abortion comes down to a few simple questions, and their equally straightforward answers.

Participants display signs and a pro-life flag at an Oct. 2 “life chain” in front of Abington Hospital. (Gina Christian)

PREVIOUS: Parishes welcome fall, and each other, at Oktoberfests