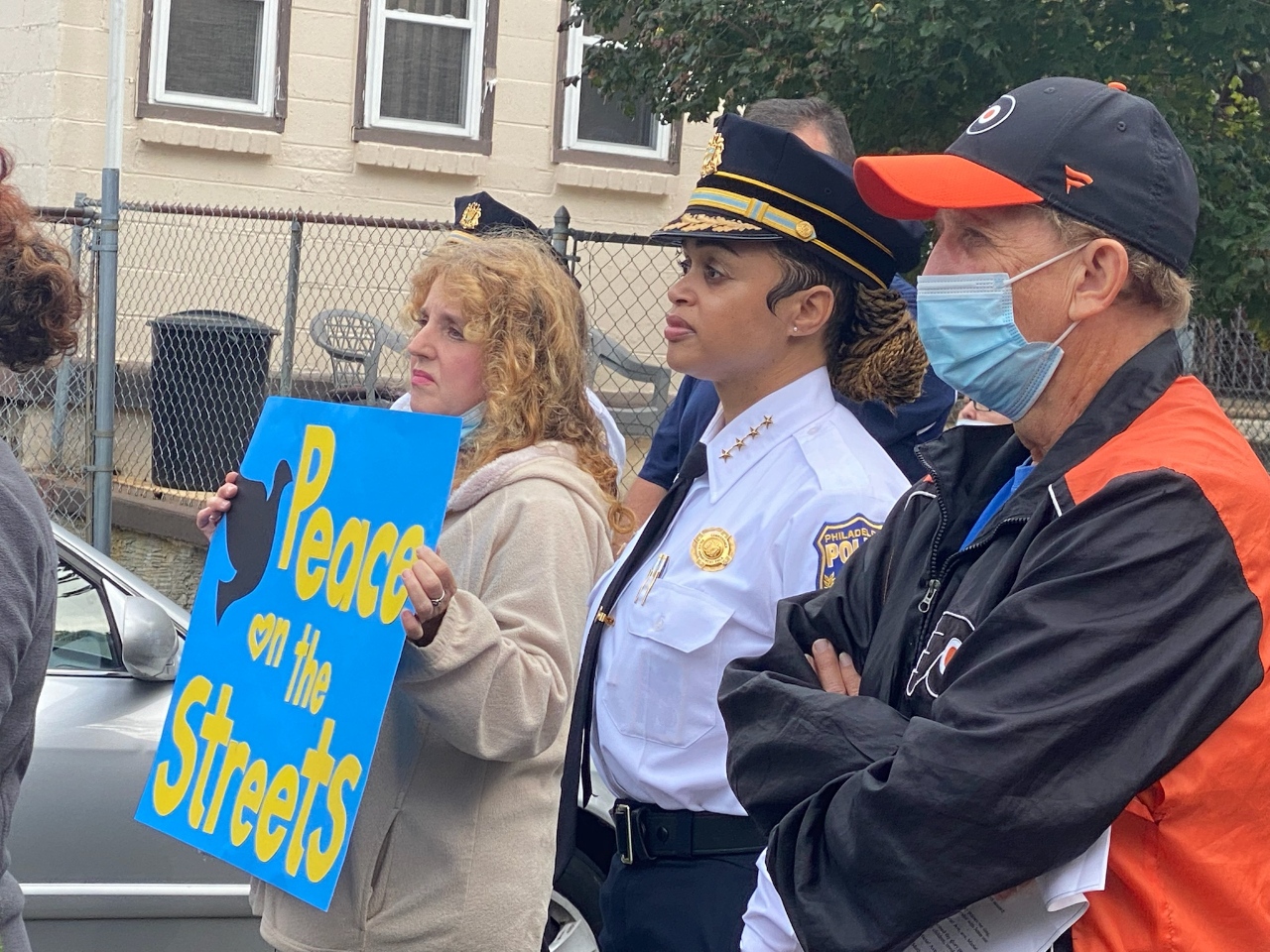 With the city’s homicides at record levels, a Northeast Philadelphia parish teamed up with local law enforcement last weekend to bring peace to the streets.

Last weekend, faithful from St. Ambrose joined members of the Philadelphia Police Department (PPD) for an Oct. 9 prayer procession through several streets in the Olney neighborhood. Led by pastor Father Charles Ravert, dozens of participants recited the rosary, sang Marian hymns and offered silent and spoken intercessions for an end to the city’s gun violence crisis.

A number of those in the procession, which was preceded by a police officer holding an American flag, displayed posters calling for an end to bloodshed. Members of other Christian denominations also accompanied the St. Ambrose parishioners.

The route included stops at three sites where attacks had taken place this year, including one shooting involving “a little boy shot in the knee in a drive-by shooting a few months ago,” said Father Ravert.

Police Commissioner Danielle Outlaw was on hand for a portion of the event, one of several in the area that helped comprise National Faith and Blue Weekend.

Sponsored by the Atlanta-based MovementForward organization and the U.S. Department of Justice, the initiative brings faith traditions and law enforcement together to strengthen communities through dialogue and bridge-building. The effort builds on MovementForward’s One Congregation One Precinct (OneCOP) program that pairs officers at the beat or precinct level with local houses of worship. 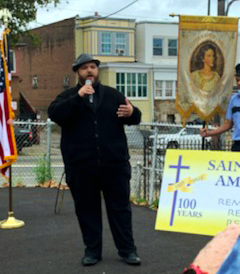 “By holding these events, I fully believe we help people to come out of their homes and be less afraid,” said Officer Hoppe. “People see a procession with the police, the Catholic church, other churches walking through the neighborhood, and that (registers).”

The procession, part of a powerful “Catholic tradition,” was a means of “trying to be a witness to peace” and “a living invitation to consider something better than violence,” said Father Ravert.

“People were comforted by it,” he said. “It was a beacon of hope. A lot of good people live in this area, and quite a few people came out of their houses as we passed. They prayed and blessed themselves.”

At the procession’s three stops, participants reflected on the causes and cures of violence, said Father Ravert.

The meditations stressed “the importance of growing as a family and uniting families around prayer,” he said.

That example is starkly countered by the culture, which often encourages a “lust after money, power and things,” said Father Ravert.

Philadelphia’s spike in gun violence is due to “many causes,” he said, but at heart is stems from “an overall disrespect for human life.”

Citing a 1994 address given by St. Teresa of Kolkata (Calcutta), Father Ravert said abortion – which the saint described as “the greatest destroyer of love and peace” – “trickles down” through society and helps to foster a “cultural anger,” particularly in at-risk youth.

“The reasons that lead them to pulling the trigger are as numerous as people themselves – fear, pressure and so forth,” he said. “But in general, we live in a society that does not value human life as it should.”

By praying in the streets surrounding St. Ambrose, Father Ravert said he and his parishioners hoped to “consecrate the places” where harm had come to others.

“The devil worked there to bring violence and chaos and pain,” he said. “We reclaimed it for peace and justice and for our country, so we can feel safe to go outside again and so our children can play in the streets.” 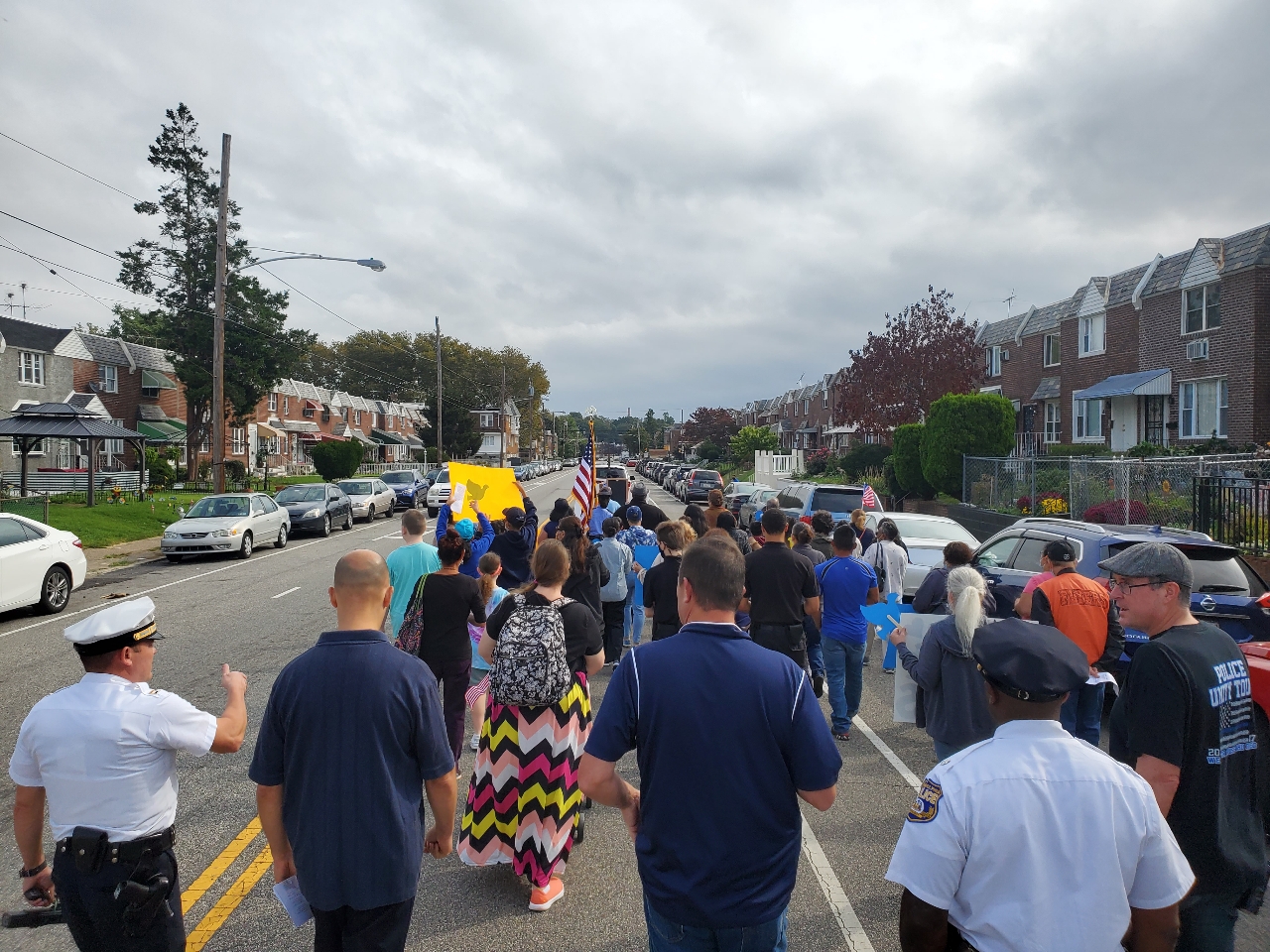 Participants walk in an Oct. 9 prayer procession organized by St. Ambrose Parish in Philadelphia as part of the 2021 National Faith and Blue Weekend. (Father Charles Ravert)

NEXT: Rosemont teams up with archdiocese to slash college tuition