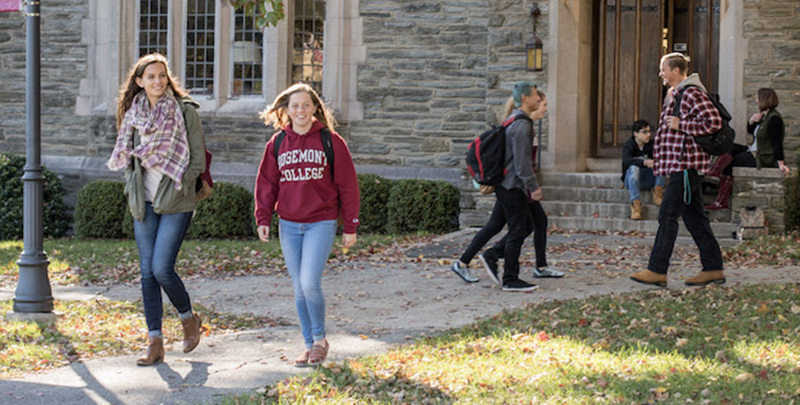 Students travel between classes at Rosemont College in Rosemont, Pennsylvania in this undated image. The school announced a partnership with the Philadelphia Archdiocese that will almost halve annual tuition for eligible graduates of Catholic high schools in the archdiocesan area. (Rosemont College website)

A local Catholic college has teamed up with the Philadelphia Archdiocese to make higher education more affordable.

Effective this academic year, Rosemont College will offer a tuition grant of $9,750 to students who graduate from Catholic high schools in the archdiocese, and who commit to attending Rosemont as residential students.

The grant slashes Rosemont’s standard tuition by 50%, bringing the annual bill to under $10,000 per year. At the same time, students would remain eligible for merit scholarships.

While “college fit is about much more than cost,” the program “makes continuing a Catholic education attainable,” said Rosemont College president Jayson Boyers.

College tuition is up 1% to 2% for both public and private schools, according to U.S. News.

Student debt has reached record highs in the U.S., with the Federal Reserve estimating Americans owed $1.73 trillion in educational loans as of the second quarter of 2021 – a 3% increase from the same time last year.

Boyers said his school’s new grant program will give Catholic high school graduates a chance to earn college degrees “with very little to almost no debt.”

“In high school, I really valued the mentorship I received from my teachers, and the opportunity to dive deeply into a topic in class,” said Hoppel. “I wanted a similar experience in college and have found that and so much more at Rosemont.”

With an 11:1 student-to faculty ratio, the school – founded in 1921 by the Society of the Holy Child Jesus – forms “a small community” in which Hoppel says she can “get to know everyone in (her) residence hall.”

Of Rosemont’s 27 undergraduate majors (with additional ones that can be individually tailored), Hoppel plans to focus on political science, with an eye to a career in politics or private-sector policy analysis.

“I am confident that other students from the archdiocese would find the right fit here at Rosemont, just like I have,” she said.

NEXT: Catholic Directory will publish, but not until early 2022