Phillies step up to the plate for archdiocesan ministry 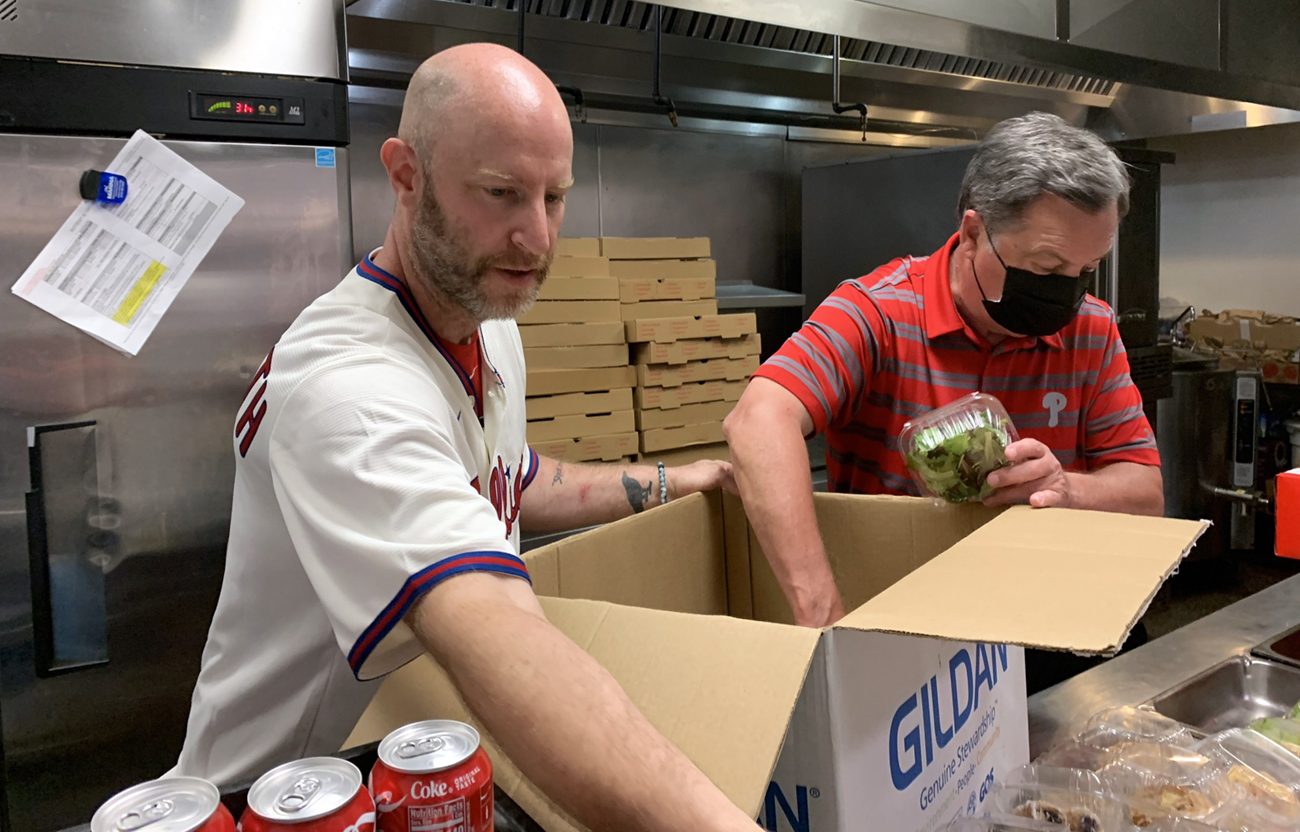 An archdiocesan ministry recently honored staff from the Philadelphia Phillies organization for stepping up to the plate on behalf of those in need.

For the past 18 months, chefs and administrators from the Phillies have been regularly supplying top-shelf meals to St. John’s Hospice (SJH). Operated by archdiocesan Catholic Social Services (CSS), the downtown Philadelphia outreach has provided care for men in homelessness for more than 50 years.

Each weekday, SJH – a beneficiary of the Catholic Charities Appeal — distributes more than 300 meals to its residential and day guests, while offering case management, on-site nursing, daily showers and a mail room. The facility annually houses some 250 men transitioning from homelessness to independent living, and has been a lifeline for clients throughout the COVID-19 pandemic. 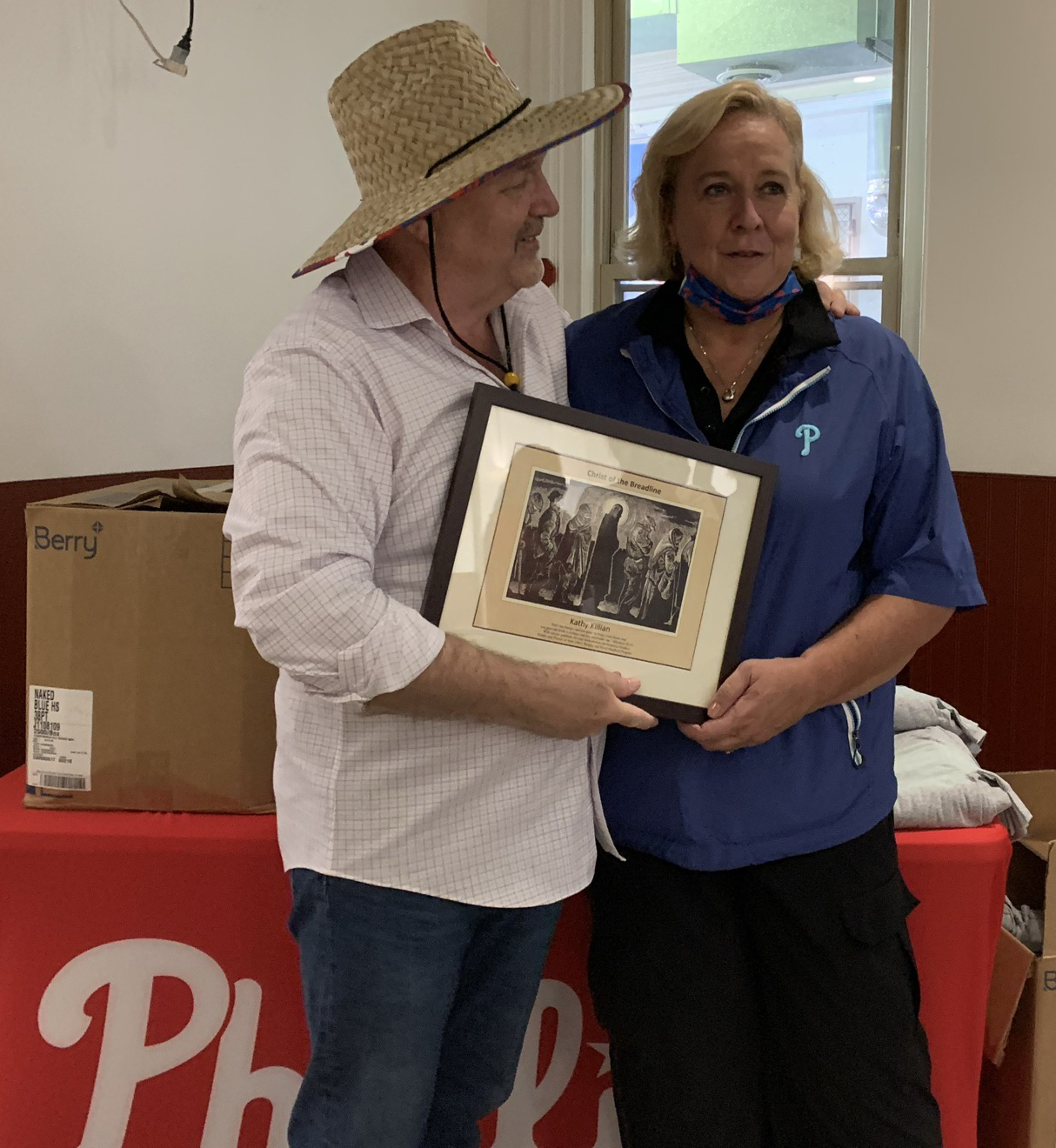 The Phils’ dishes typically range from prime rib to chicken parmesan, with plenty of shrimp, salmon, branzino, halibut and lobster bisque rounding out the menu.

“I go through a ton of it,” he said. “A lot of the guys are from coastal areas like Florida, California, the Dominican Republic and Venezuela, so seafood is very prevalent in their lives.”

“We’ve even had people who are vegan able to eat here because of the food you brought us,” he told the Phillies staff. “And what that means is that you’re able to think outside of the box and … give back to the community.”

Dandridge enjoyed seeing “where the food ends up, and in such a positive way.”

“We make food in abundance at the ballpark, and there’s no way it can all be consumed,” he said. “This is the best solution anyone could ever think of.”

Killian said she and her colleagues are “all committed” to SJH, and have been “coming twice a week since last July” as part of “a labor of love.”

Standing ready to hand out the gourmet meals, SJH staff member Keith admitted he was at a loss for words.

“We truly appreciate what (the Phillies) have done for our residents and clients,” he said.

SJH client George said he was looking forward to a “wonderful” lunch – a real home run, as well as a sign of faith in action, said Martin.

“Matthew 25 says that ‘whenever I was hungry, you fed me,’” he said. “This is what we’re doing here, trying to live out the Gospel in the simplest manner we can.” 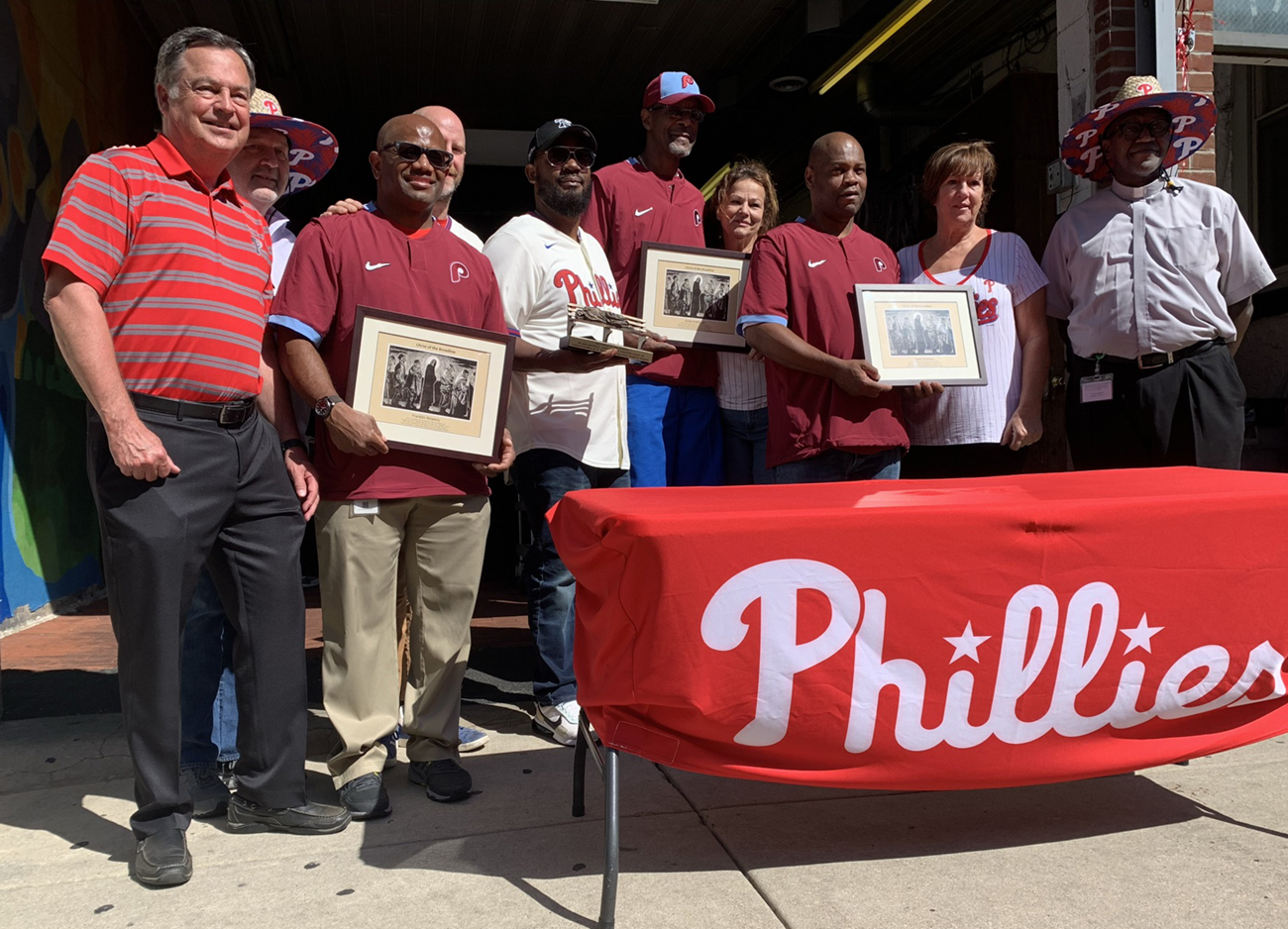 Members of the Philadelphia Phillies’ organization pose with staff at St. John’s Hospice during a Sept. 27 ceremony at the ministry that honored the team for donating top-quality surplus meals. (Gina Christian)

NEXT: Delco church set to close, but its legacy lives on one mile away