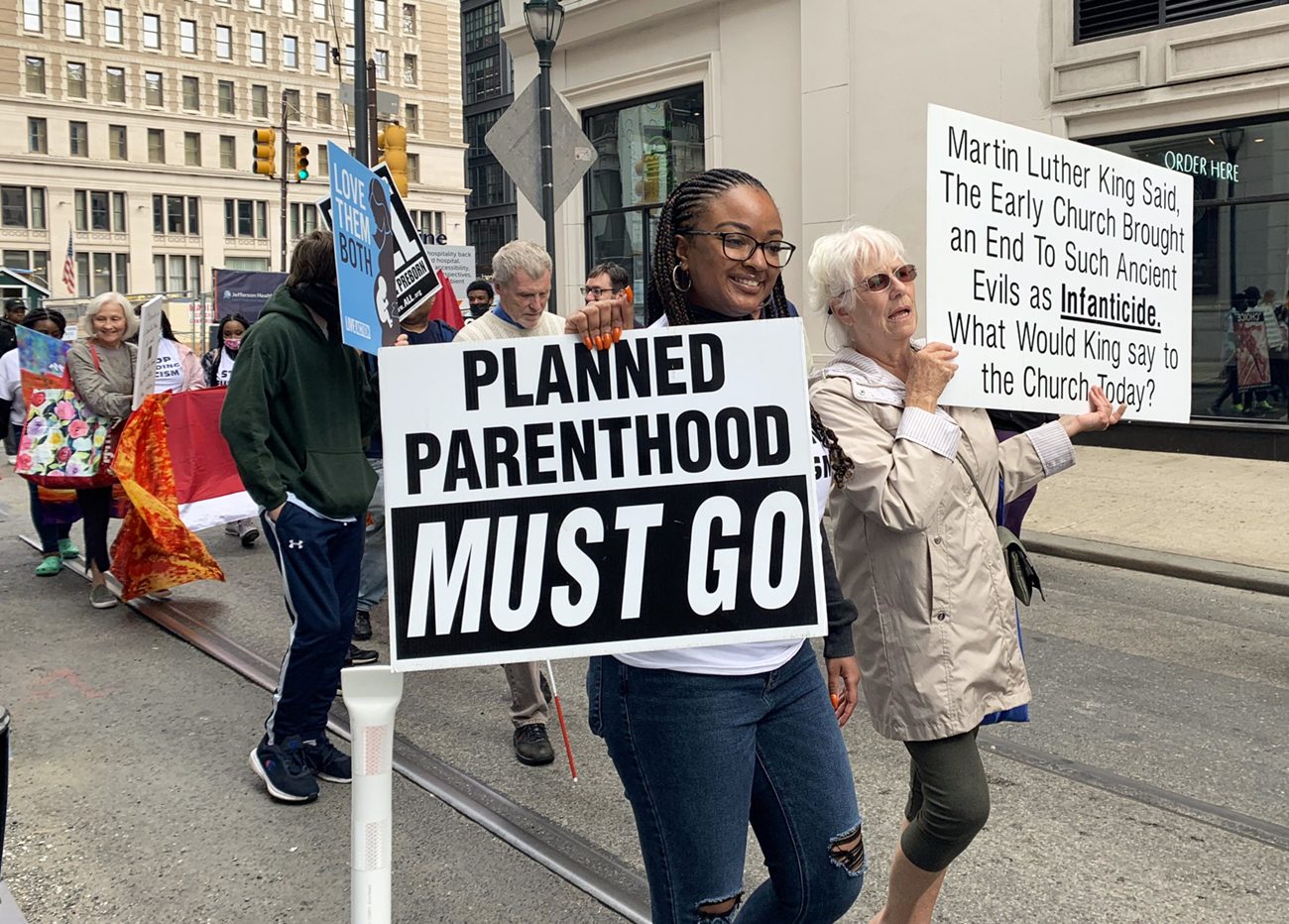 Participants in an Oct. 9 rally sponsored by the Pro-Life Union of Greater Philadelphia march to a downtown abortion clinic. The gathering highlighted abortion's disproportionate impact on people of color, with many in attendance describing it as a "Black genocide." (Gina Christian)

Some 120 were on hand for an Oct. 9 prayer vigil in downtown Philadelphia that began in front of the Philadelphia Women’s Center at 777 Appletree Street, continued on to Planned Parenthood some 15 blocks away and concluded at the Liberty Bell.

Dozens of New Calvary congregation members, including many young adults, were also on hand, wearing shirts and bearing signs calling for an end to both the “funding of racism” and “Black genocide” – issues that Rev. Childress, citing Venerable Fulton Sheen as a major influence, has spoken out against for several decades.

According to the Guttmacher Institute, Black, Hispanic and other non-White patients accounted for 62% of all U.S. abortions in 2014. 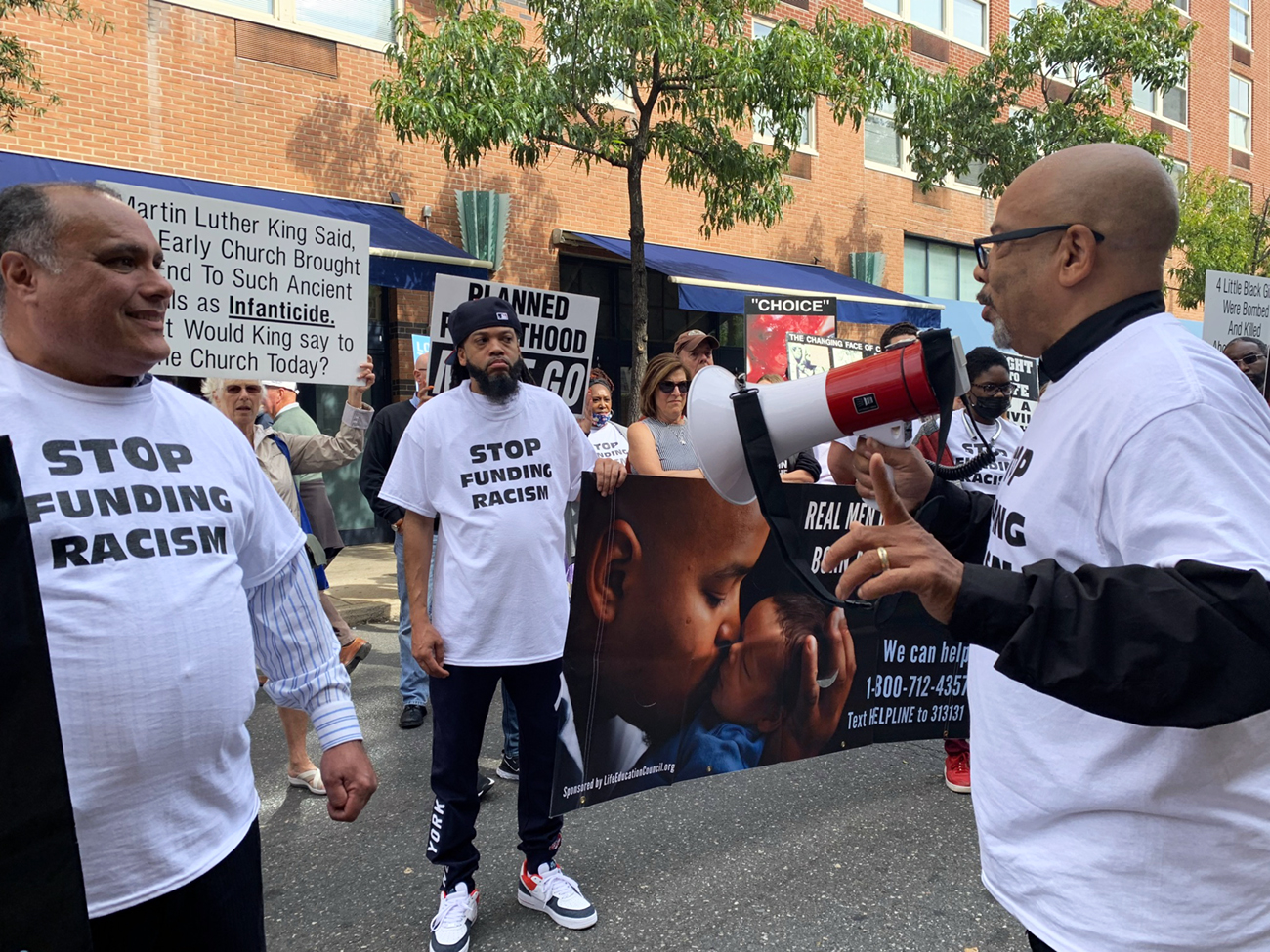 The case of jailed abortionist and drug dealer Kermit Gosnell, whose clients were largely impoverished women of color, graphically underscored that disparity, said Rev. Childress, who as part of the National Black Pro-Life Union held a 2013 press conference in Philadelphia to demand mainstream media coverage of the Gosnell trial, then in process.

Fellow rally speaker Hector Ferrer, an Assembly of God chaplain, said there was “no dispute … that Margaret Sanger, the founder of Planned Parenthood, was a racist … and it was her intent to do away with … people that looked just like me.”

Pro-Life Union board member Patrick Stanton, a member of Immaculate Conception B.V.M. Parish in Jenkintown, displayed a poster board with a quote from a 1939 letter by Sanger, in which she admitted she did “not want word to go out that (she wanted) to exterminate the Negro population.”

In the same letter, Sanger urged training of Black doctors and ministers to encourage birth control and abortion, while countering the “ignorance, superstitions and doubts” of Blacks on the subject and working to “straighten out” any dissent among congregations’ “more rebellious members.”

Back in April, Planned Parenthood Federation president Alexis McGill Johnson admitted in a New York Times opinion piece the organization must “fully take responsibility for the harm that Sanger caused to generations of people with disabilities and Black, Latino, Asian-American, and Indigenous people.”

Stanton said Sanger’s legacy was at odds with the “Black Lives Matter” signs in the windows of the Philadelphia Women’s Center, which was inexplicably closed Oct. 9 during the rally. A call placed to the center by CatholicPhilly.com for information regarding the closure was not returned.

“Saturday is usually pretty busy, when the most abortions are done there,” said Stanton, who regularly visits the site for peaceful protests. “But at least about 50 babies didn’t get murdered (today).”

Laura Gies of St. Joseph Parish in Downingtown estimated “a 20-woman day of abortion appointments” adds up to “a $10,000 day minimum” for the center, based on her research that each abortion there costs “at least $500, give or take.”

That fee is consistent with those listed on Planned Parenthood’s Western Pennsylvania website, which provides a detailed overview of abortion fees based on pregnancy stage and the preferred level of sedation. A review of Planned Parenthood’s 2019-2020 annual report by the Charlotte Lozier Institute found the organization reported $1.6 billion in income and over $2 billion in net assets, with taxpayer funding accounting for 38% of the organization’s overall revenue.

Along with other rally attendees, Gies was dismayed to see the Philadelphia Women’s Center’s front-window display of small Catholic saint dolls, which held handwritten signs reading “thank God for abortion,” “abortion is life” and “there is no universal.”

Yet such statements directly contradict the core principles of the United States, said Joe Rooney, a parishioner at Queen of Peace in Ardsley and a longtime pro-life advocate.

Speaking during the rally’s final stop at the Liberty Bell, Rooney quoted the introduction to the Declaration of Independence, which states as a “self-evident” truth that humans are “created equal” and “endowed by their Creator with certain inalienable rights.”

“This is the foundation of our society,” said Rooney, who also pointed to Scripture verses such as Jeremiah 1:5 (“Before I formed you in the womb, I knew you”) and Psalm 139:14 (“I praise you because I am wonderfully made”) as affirmations of human dignity and the right to life.

Abortion by definition is “inherently anti-woman,” said Pro-Life Union board member and Students for Life regional coordinator Liana Hollendonner, who referred to 15th-century warrior St. Joan of Arc as a personal source of inspiration for her own work.

Laws such as Texas’ recent heartbeat legislation are signs of “the pro-life movement’s success,” said Hollendonner.

“All of these victories are striking fear into the heart of the abortion industry, as they should,” she said. 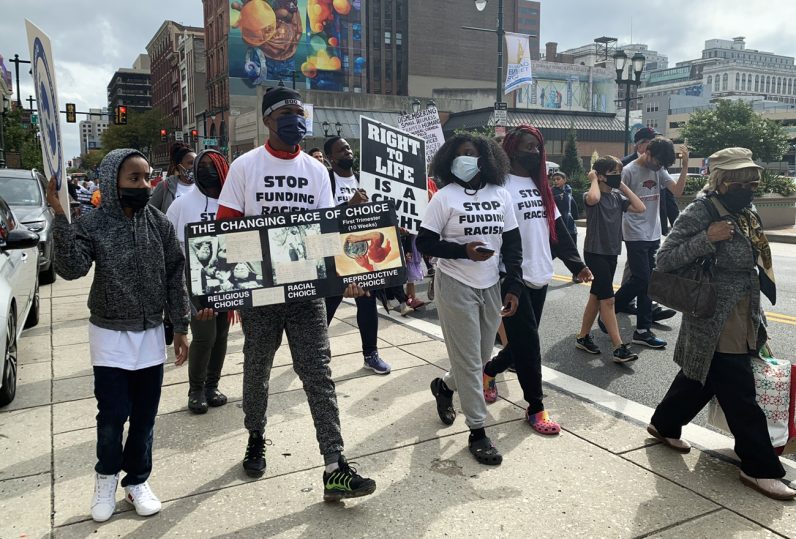 An Oct. 9 rally sponsored by the Pro-Life Union of Greater Philadelphia drew a number of young adults, many of whom carried signs denouncing abortion as a form of “racism” and “Black genocide.” (Gina Christian)

PREVIOUS: Catholic Directory will publish, but not until early 2022