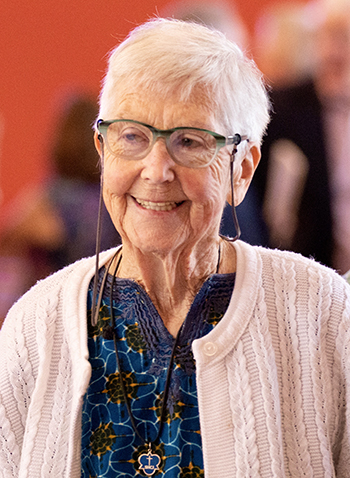 Sister Megan Rice, a Sister of the Society of the Holy Child Jesus, missionary and ardent social justice advocate, died Oct. 10 at Holy Child Center in Rosemont. She was 91.

During her 71 years of ministry as a religious, Sister Megan became known internationally for her work in support of nuclear disarmament.

“Sister Megan lived her life with love full of action and zeal,” said Sister Carroll Juliano, American Province Leader for the Society of the Holy Child Jesus. “Her commitment to build a peaceful and just world was unwavering and selfless. She will be sorely missed, but her work will endure.”

Born in New York City, at an early age she developed a deep belief in equity and justice for all, which was nurtured by her father, a physician, and her mother, a college professor.

She entered the Society of the Holy Child Jesus in 1947, immediately following her graduation from St. Walburga’s Academy. She made her final vows in 1955 and became well known by her religious name, Mother Frederick Mary.

Sister Megan’s first ministry was as an educator. She taught for 12 years at various schools across the country, including St. Edward and Holy Spirit, both in Philadelphia.

While she loved teaching and spending time with her students, Sister Megan’s great desire was to minister in the Society of the Holy Child Jesus – African Province.

In 1962 she traveled to Nigeria and began a ministry of 23 years working as a teacher, catechist, pastoral guide and administrator in impoverished West African communities, which often lacked clean, running water and electricity.

On her return to the United States in 1986, Sister Megan continued her work with marginalized communities, including at the Catholic Worker in New York City, St. Mary Parish in Syracuse, N.Y., Jonah House in Baltimore and the Franciscan Center for Peace in Reno, Nevada.

Eventually she returned to the Society’s African Province where she served in religious education and pastoral care for several more years between 1991-2003.

Sister Megan’s missionary zeal and independent advocacy led her to peacefully protest for nuclear disarmament, as Catholic teaching condemns the use of nuclear weapons.

She was arrested on numerous occasions and, at 82, was sentenced to three years in federal prison, where she was released after two years.

Despite her selflessness and quiet demeanor, Sister Megan earned national recognition for her nuclear disarmament activism. She was featured on the front page of the New York Times, testified before Congress and was the subject of a documentary.

She was predeceased by her parents Frederick and Madeleine (Hooke) Rice and sisters, Cornelia Augusta (Alessandra Rice), S.H.C.J., and Madeleine (Rice) Finnerty.

She is survived by nieces, nephews, cousins, grandnieces and grandnephews.

Memorial donations may be sent to the Society of the Holy Child Jesus – American Province, 1341 Montgomery Avenue, Rosemont, PA 19010, or online at www.shcj.org/american/donate.

NEXT: Father Michael Rock, pastor of Our Lady of Lourdes, dies suddenly