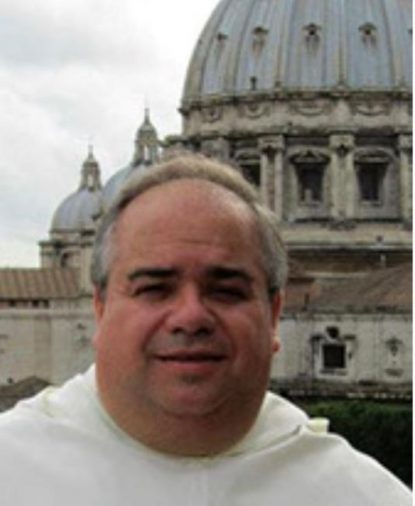 Father Michael R. Rock, 62, a priest of the Order of the Blessed Virgin Mary of Mercy (Mercedarians) and pastor of Our Lady of Lourdes Parish in Philadelphia’s Overbrook section, died suddenly Oct. 5 in Cleveland, Ohio.

His service and generosity, as well as his love and devotion to Christ, wisdom, powerful homilies, storytelling and sense of humor are recalled by family, friends and those he served.

He was born in Cleveland, son of Russell and Grace Rock, and graduated from the Mercedarian parish school of Our Lady of Mt. Carmel. After graduating from St. Edward High School, he entered religious life as a postulant of the Order of the Blessed Virgin Mary of Mercy in August 1977.

Following his first profession of vows on Aug. 15, 1980, he went to St. Charles Borromeo Seminary in Wynnewood for his priestly formation. He received a B.A. in philosophy in 1982 and later an M.A. in theology in 1986.

He later earned an M.A in history at Villanova University in 1991.

He was ordained a priest on May 24, 1986 at his home parish of Our Lady of Mt. Carmel in Cleveland. He then served as associate pastor at that parish.

In 1989 he became the director of vocations and director of mission development for the Mercedarian Community, as well as a chaplain to the Missionary Sisters of the Sacred Heart in Philadelphia.

He continued to work in the initial formation of the Mercedarian students in Philadelphia until he was asked to go to India in 1997 to help establish a new mission and formation program there.

In 1999 Father Rock was appointed pastor of St. Peter Parish in LeRoy, N.Y. (now known as Our Lady of Mercy Parish / St. Brigid Parish) where he served until 2012. At that time he also served as president of the Board of Directors at Notre Dame High School in Batavia, N.Y.

He was then appointed pastor of Our Lady of Lourdes Parish in Philadelphia, a position he would hold until his death. In 2015 he was named the vicar provincial for the Vicariate of the USA for the Mercedarian Order.

Aside from his pastoral responsibilities, Father Rock was active in several social and philanthropic organizations including his service as a Magistral Chaplain for the Knights of Malta, a member of the Council of Priests for the Archdiocese of Philadelphia, chairperson of the Philadelphia Chapter of the Patron of the Arts in the Vatican Museum, a member of the National Catholic Historical Society, as well as a member of the Friends of the Metropolitan Opera Association.

Funeral rites will begin with the reception of the body on Sunday, Oct. 17 at 4 p.m. at Our Lady of Lourdes Church, Philadelphia, including vespers. A memorial Mass for the parish will be celebrated at 8 p.m.

Archbishop Nelson Perez will celebrate the funeral Mass at the church on Monday, Oct. 18 at 10:30 a.m. Burial will be in Holy Cross Cemetery, Yeadon.

Bishop Edward Malesic of the Diocese of Cleveland will celebrate a memorial Mass Wednesday, Oct. 20 at noon at Our Lady of Mt. Carmel Church, Cleveland.

Contributions in Father Rock’s memory be made to the Fathers of Our Lady of Mercy Student Account to support the education of Mercedarian brothers and seminarians.

NEXT: Lou Baldwin, Catholic journalist for 35 years, dies at 86