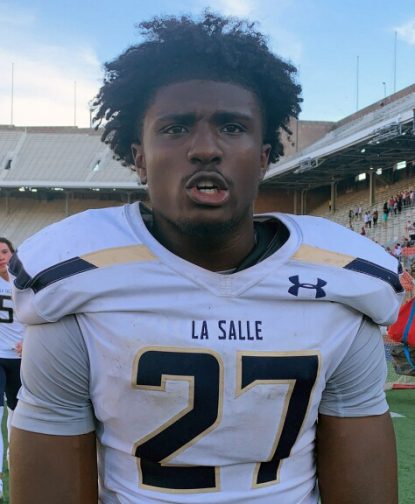 Sparked by senior Sam Brown’s 82-yard jaunt down the right sideline on the second play of the third quarter Saturday afternoon, Oct. 2 in front of an announced 10,000 fans at Franklin Field, the Explorers defeated the Hawks, 28-21, for the first time since winning the 2015 Catholic League championship.

“We needed to make a play,” said Brown, a two-time All-Catholic. “It all happened so fast. I just thank my fullback, my receivers, and my offensive line.”

The Hawks came to within 28-21 on a six-yard touchdown pass from Jones to junior Mike DiTriolo with 9:31 remaining in the fourth, but the torrid linebacker trio of senior Abdul Carter, junior Sean McFadden and sophomore Matt Wills prevented the Prep from reaching midfield the rest of the way.

“It was all about the physicality,” said McFadden. “Both teams were really, really physical. Our defense, that’s just how we are. You might be more talented than us, but we are going to be more physical than you.” 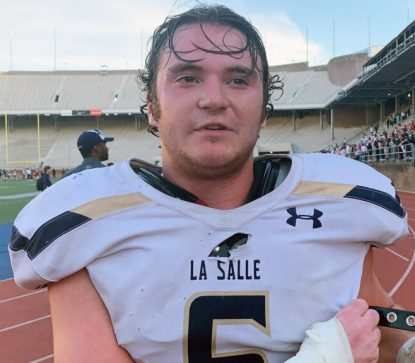 Along with accruing 130 yards of offense, Moore turned a busted fourth-down carry into an impromptu punt that pinned the Prep at its own one-yard line late in the fourth quarter. Moore then iced the triumph by intercepting a pass inside the Prep 40-yard line with 41 seconds left in regulation.

“It felt really good knowing that it sealed the game and that the hard work we put in over the last couple months is paying off,” said Moore. “Knowing that we had a lot of doubters saying we couldn’t win the game pushed us to work even harder, and knowing that the interception had definitely proved them wrong was a great feeling.

“But that would have never happened if it weren’t for the defense making play after play to lead up to that final play. Everybody did their assignment, and I just happened to be in the right place at the right time.”

As the Explorer faithful celebrated throughout Franklin Field, Brown looked around and smiled widely.

“It means a lot, especially for the senior class,” said Brown. “I’m happy for our coaches. It’s just very exciting to be able to do this.”