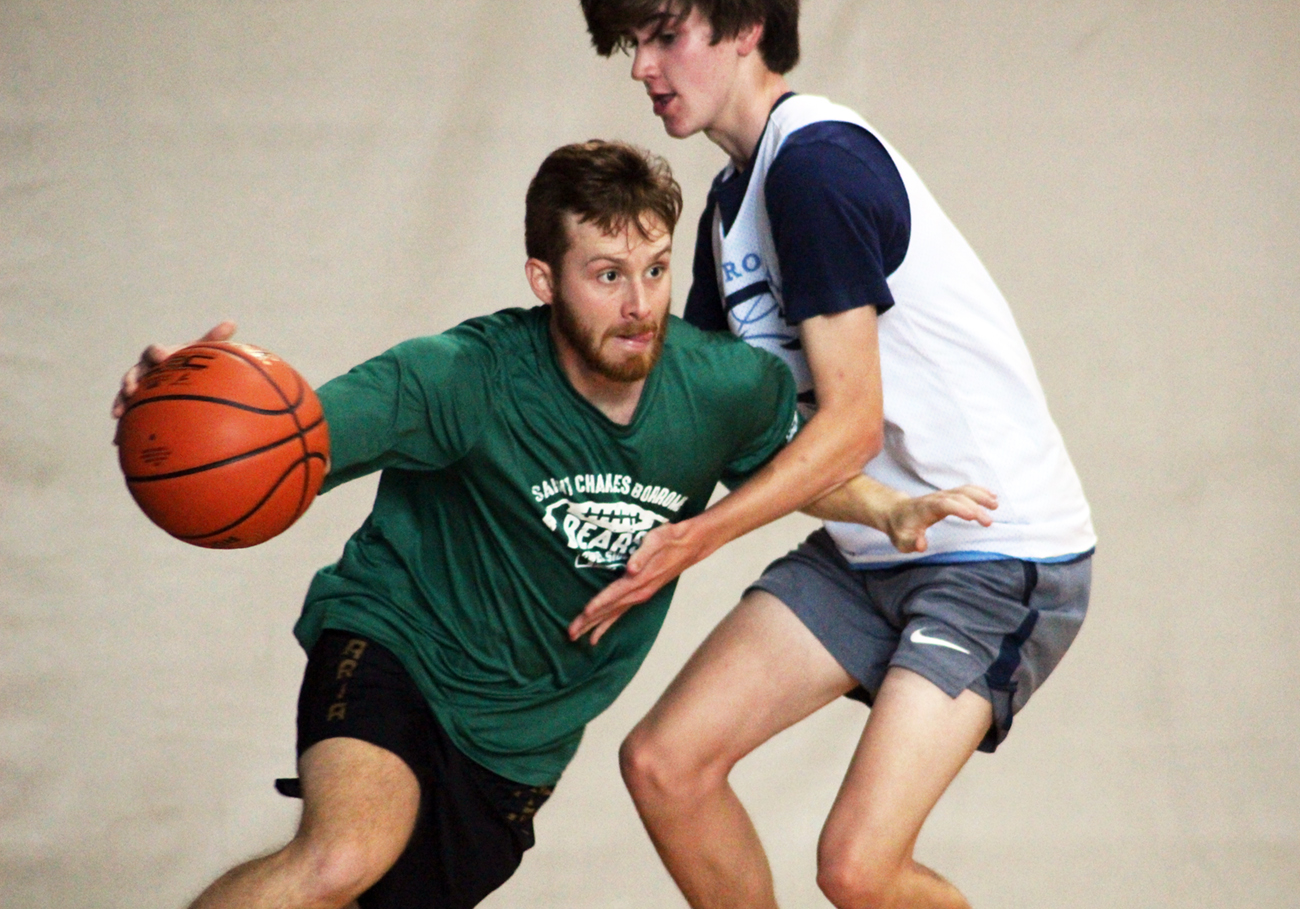 Seminarians from St. Charles Borromeo Seminary in Wynnewood tipped off against teens from Holy Rosary CYO basketball in a Nov. 13 game that capped the archdiocesan observance of National Vocation Awareness Week. (Gina Christian)

Teens and seminarians sparred on the basketball court this past weekend, in a game that was a win-win for priestly vocations.

The match capped the archdiocesan schedule of events for National Vocation Awareness Week (Nov. 7-13), an annual initiative of the U.S. bishops inviting young people to heed the call to religious life.

And although the Bears were edged out 42-41 by the Holy Rosary team (representing the Montgomery County parishes of Epiphany of Our Lord, Holy Saviour, St. Paul and St. Titus), the seminarians said the game’s real goal was to “plant some seeds” for future vocations.

“We want to show that seminarians are normal guys, just like anybody else,” said Randy Kraft, now in third theology at Wynnewood-based St. Charles Borromeo.

Fellow seminarian Shane Flanagan, who recounted his vocation story to the Holy Rosary players during a break, said his own call to the priesthood caught him off guard.

While a junior at Father Judge High School in Northeast Philadelphia, Flanagan excelled at basketball, a talent he’d hoped to parlay into a college scholarship. After a crushing defeat in a game against Archbishop Wood, he was asked by his mother – who sought to distract him from the loss – what profession he wanted to enter.

“At that moment, the only thing that popped into my head was, ‘You have to tell her you want to be a priest and that you want to go into the seminary,’” said Flanagan. “And I didn’t even know what the seminary was.”

He admitted the prospect of religious life “terrified” him, since he had planned to marry and raise a family. Upon graduating high school, he enrolled at Arcadia University to pursue a degree in physical therapy — but the same “nagging thought” of priesthood, which overshadowed his final semesters in high school, persisted.

Flanagan transferred to St. Charles Borromeo Seminary’s College Division with the intention of “getting a degree,” only to find the curriculum contained a bit more than he’d anticipated.

“God started to work in my life in a way that I’d never really experienced before,” said Flanagan, who came to see that his dream of becoming a father could be realized in a beautifully unexpected way through the priesthood.

Flanagan’s journey to religious life is “clearly the work of the Holy Spirit,” said Father David Friel, director of the Vocation Office for the Diocesan Priesthood.

The casual setting of the Nov. 13 game, part of an ongoing series, was a perfect place to open up a dialogue about vocations, Father Friel added.

Youth “get to see the seminarians in a different light,” she said, and the CYO’s “automatic connection with sports and our faith” make the games “a great way to combine a fun activity with prayer and a vocation story.”

Shane Carr, a shooting guard for Holy Rosary, enjoyed what he said was “a good game” played against “really good competition.”

“The seminarians were better than I thought,” said Carr.

Kraft said he hoped Saturday’s game stirred the teens to begin listening for a call to religious life.

“You don’t need to be a theologian or a spiritual master to go into the seminary,” he said. “You just have to be a man who’s willing to give it a shot, and to trust in the Lord.”

“When you hear God in your heart and you hear that call … just trust,” he said. “God will provide a joy you’ve never experienced.” 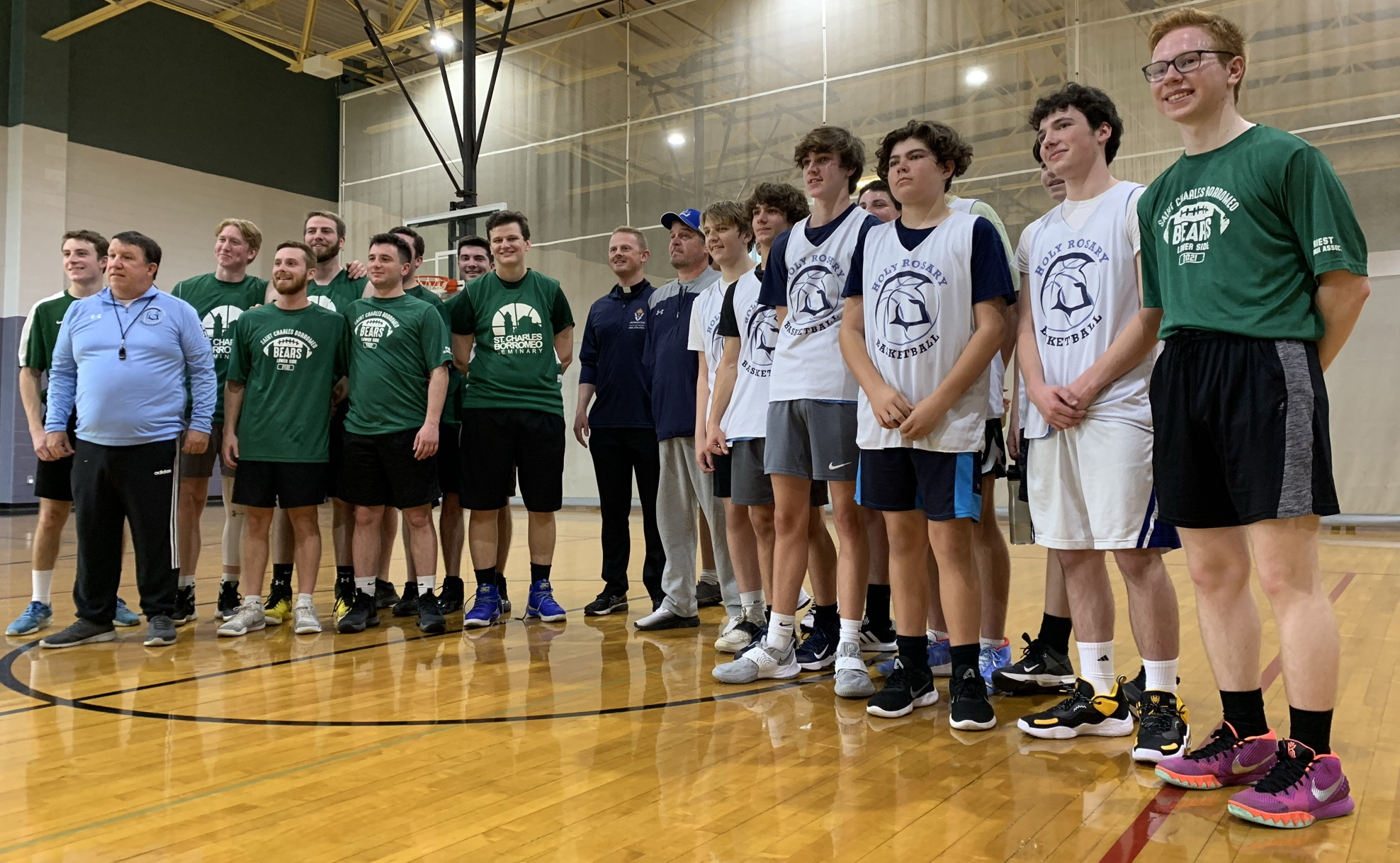